The empty black chair
once used by someone of great value
claimed through a senseless,
bloody war
robbing her of the only
lifeline
that kept her tethered
to sanity

And now you will endure trial by gift-giving he said,

hiding behind flowers. Follow the scent to your destination.

It may not be where you need to go.

In the unconscious night
the world is in colours,
swirling, melting and folding.
There is joy and laughter,
people surround me
like a child’s blanket.
In the daylight my room is empty.

The Factory after AWD1 Masks

Cowling in jealousy
he lines her eyes.
Captures her effervescence,
day-glo rage contained.

The smirking devil behind her –
always a man –
pulls the strings tighter, tight,
one more time.

Abandoned–
the building with its
cornices, pilasters, and medallions,
its stained-glass windows
now dirt-begrimed,
its corners where cobwebs drip,
and its dust-blanketed floor, a canvas
for the nut-brown rats to paint
as they skitter-skat across it
after the owl moon rises.

Each night
it seems to tilt a bit more,
sigh harder
as if bearing the weight of the ghosts
who haunt it,
the call of the eternal is a murmur,
soft rat squeaks, chirrs, and thrums,
susurrations carried by motes, adrift in light. 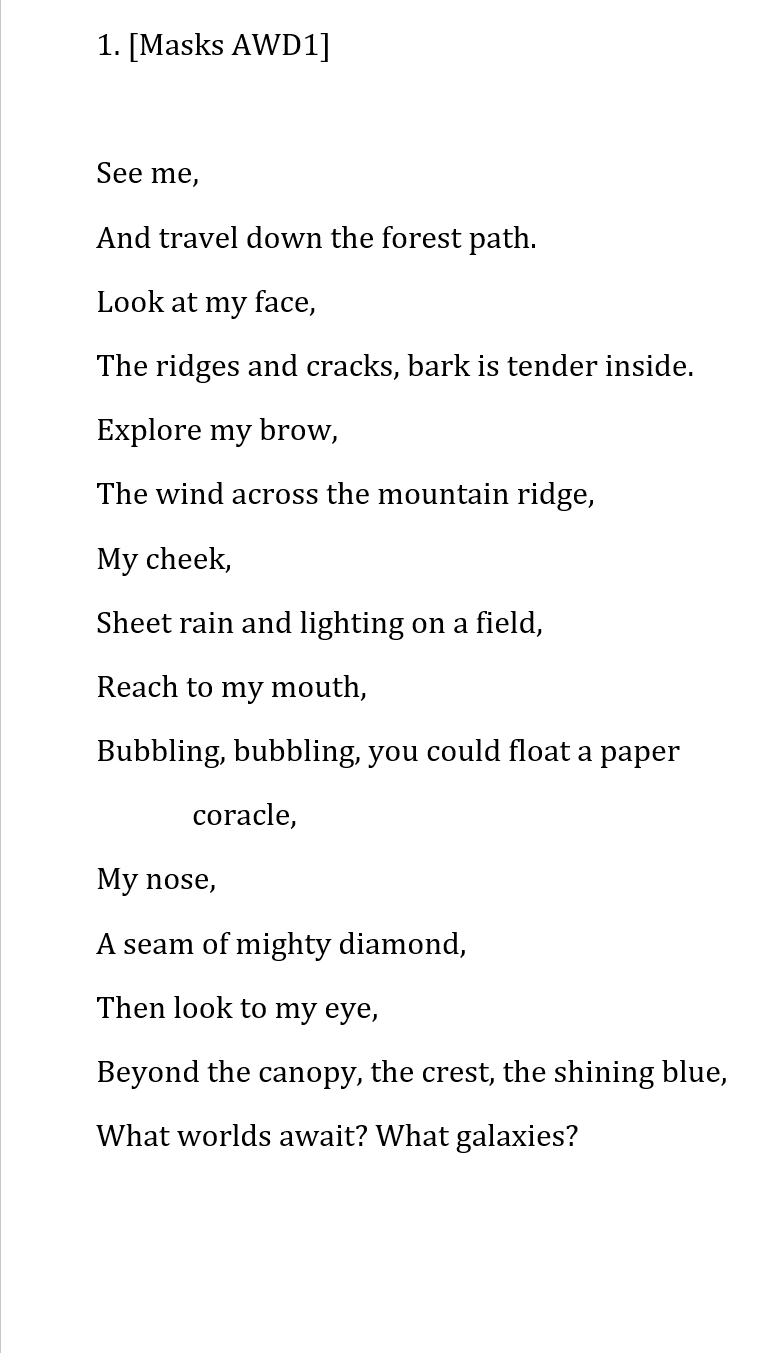 When the kids come to smoke after school,
they find themselves hushed, swaggers
cowed into something more furtive. They hop
-skip into each other’s dust-prints, flash back
to chalk grids on primary school playgrounds.
Allow chinks in the armour of their coolness.
Whether out of respect or fear, they’re not sure.

And soon enough they stop coming back.

It’s been left to the trees now,
their limbs much less respectful. Vines creep
thick and alien over the old plaster,
brambles relentless in their push at the window,
eventually victorious in a thorny shattering,
glinting like stars seen through fog. No malice,
we don’t think. Merely the dull inevitability of age.

Finding Space in the Cellar of Time (AWD1)

Nebulae robe the wicked,
dust feet of iron and clay.
Hubble’s palette narrowbands
the night. Nebudchanezzar
dreams and Babylon pours
another glass of champagne
from a bottle named
for the king. Lips growl
behind masks black as Jerusalem
burned, empty as babble.
Stars bubble neon as fifteen
liters of fizz party the flames.

Would anyone return?
illumine, ring the bells
pray away, silent agony.

Every Eden has a snake
Every rose bush a thorn,

greens fresh of every sect
steadfast remain to protect,

whatever color or shape
accept diversity in good faith.

Shield to keep away,
all invisible killers,
Death will conquer all.

are empty rooms, empty tables and chairs.
Once occupied with breath and deep laughter.
While you draw your finger in their dust. Share
tales, to some living in them still matters.

Downgraded from war to conflict,
there are those still dying from it each day.
Downgraded from plague to living with it.
whose homes are bombed out shells,
where once was play.

Note, a virus does not negotiate.
only battles the defences you raise.
Bombs do not argue or discriminate
their message is a grief that always stays.

A pandemic is a tyrant who needs
your homesoil, your close ones and makes you bleed.

Gaynor Kane lives in Belfast, Northern Ireland, where she is a part-time creative, involved in the local arts scene. She writes poetry and is an amateur artist and photographer. In all her creative activities she is looking to capture moments that might otherwise be missed. Discover more at gaynorkane.com

Subject of Fine Arts at Intermediate level at Govt.College for Women Rawalpindi,   was stopped by the Indo Pak War of 1965. Anjum continued her passion for art privately.
Her job as a Teacher Instructor allowed her to pursue Art work designing and preparing  Thematic Bulletin Boards and Low cost teaching Aids with the Fauji Foundation Teacher’s Training Institute Rawalpindi. www.faujifoundation.org.
This won her the National Education Award 1998.

Completing  a Course in Graphic Designing  at NICON Academy Rawalpindi , Anjum began working as a Digital Artist, On Line, registered her Own Firm CER Creative Education Resources 2004 and is a Member of DRN Drawing Research Network UK  and www.bigdraw.org.uk
https://www.lboro.ac.uk/research/tracey/drn/
https://sites.google.com/site/cerprofessionaldevelopment/
With her artistic skills she plans and conducts “Environment Awareness Workshops for Children” and is a member of www.unep.org and www.earthday.org
CER Participated in World Environment Day and Earth Day Programs 2011-2013
“Face of Climate Change”
Anjum  loves Nature, landscapes and abstract imagery. Works with pencils, crayons and  the Software ArtRage 2.0  and MyPaint.

lives in southern New Jersey near the Delaware River. Her poetry has been published in several poetry journals and anthologies, including Black Bough Poetry, Anti-Heroin Chic,  Fevers of the Mind, and Nightingale and Sparrow. Her first full-length poetry collection, River Ghosts, is forthcoming from Nightingale & Sparrow Press.  Twitter: @merril_mds  Instagram: mdsmithnj  Website/blog: merrildsmith.com

is a teacher and writer. She was shortlisted for Love Reading UK’s 2022 Very Short Story Award. Featured flash can be found in The Broken Spine, FullHouseLitMag and RoiFaineant. Kathryn O’Driscoll selected her poem Empty for Full House’s 2021 mental health live reading and forthcoming podcast. Brian Moses, The Dirigible Balloon and Parakeet Magazine have published some of her writing for children.

has poems in or forthcoming from Figure 1, Olney Magazine, Yemassee, Moist Poetry Journal, and elsewhere. Also to come is her chapbook Talk Smack to a Hurricane (Ice Floe Press, 2022) about mothers, daughters, and mental illness. She was a 2020 Red Wheelbarrow Poetry Prize finalist. Born in Newfoundland and raised in the Deep South, she lives in mid-Missouri where she edits academic books and journals. Visit her at https://lynnejensenlampe.com. Twitter: @LJensenLampe.

is London-born, but is now based in Oxford. He has two books published: Sabrina Bridge, a poetry collection, from Black Pear Press (2017), and The Knotsman, a collection of verse, rhyme, prose and poetic monologue, which tell of the life and times of a C17th cunning-man. Much of his verse comes out of mythology and folklore: encounters with the uncanny and unseen. Also, as words written for Pagan ritual or as praise poems for a multitude of goddesses and gods. He is a trained actor and performs his poems widely.

is an author and poet from Northern Ireland now living in Scotland. She has been published widely including Poetry Scotland, The Blue Nib and Marble Poetry. She loves spending time with her grandchildren, curling up with a good book and champagne or cocktails in no particular order.

is a poet and sailor living in Plymouth. She often writes about loss, rescues and the sea.

Her work has been published in anthologies from Arachne Press, Nine Pens, Quay Words, Slate, snakeskin, and soon by BrokenSpine and Broken Sleep.

Her poetic relationship with sound has been helped by her work as a BBC broadcaster, editing words on screen.

is from the mystical Adirondack Mountains now living on a farmstead in the Red River Valley of North Dakota (USA). She writes dark fiction and poetry. A Deafblind, her work has been published in places such as GFT Press, Doll Hospital Journal, The Hungry Chimera, Asylum Ink, Piker Press, Edify Fiction and others. You can find her on her writing blog as well as Medium and Twitter.

lives by the sea in Essex with her husband and two small children. Her work has appeared or is forthcoming in a variety of publications including Ink Sweat & Tears, Chestnut Review, Atrium and The Madrigal. Her first collection, The Colour of Hope, was published in 2020 and she’s currently working on a chapbook of poems about early motherhood.

is a shop asst in a supermarket. Lives in a cat house full of teddy bears. First play performed at The Gulbenkian Theatre, Hull.  His chapbooks include The Fabulous Invention Of Barnsley, (Dearne Community Arts, 1993). A World Where and She Needs That Edge (Nixes Mate Press, 2017, 2018) The Spermbot Blues (OpPRESS, 2017), Please Take Change (Cyberwit.net, 2018), As Folk Over Yonder ( Afterworld Books, 2019). He is a contributing writer of Literati Magazine and Editor of Wombwell Rainbow Interviews, book reviews and  challenges. Had work broadcast on BBC Radio 3 The Verb and, videos of his Self Isolation sonnet sequence featured by Barnsley Museums and Hear My Voice Barnsley. He also does photography commissions. Most recent is a poetry collaboration with artworker Jane Cornwell: “Wonderland in Alice, plus other ways of seeing”, (JCStudio Press, 2021)