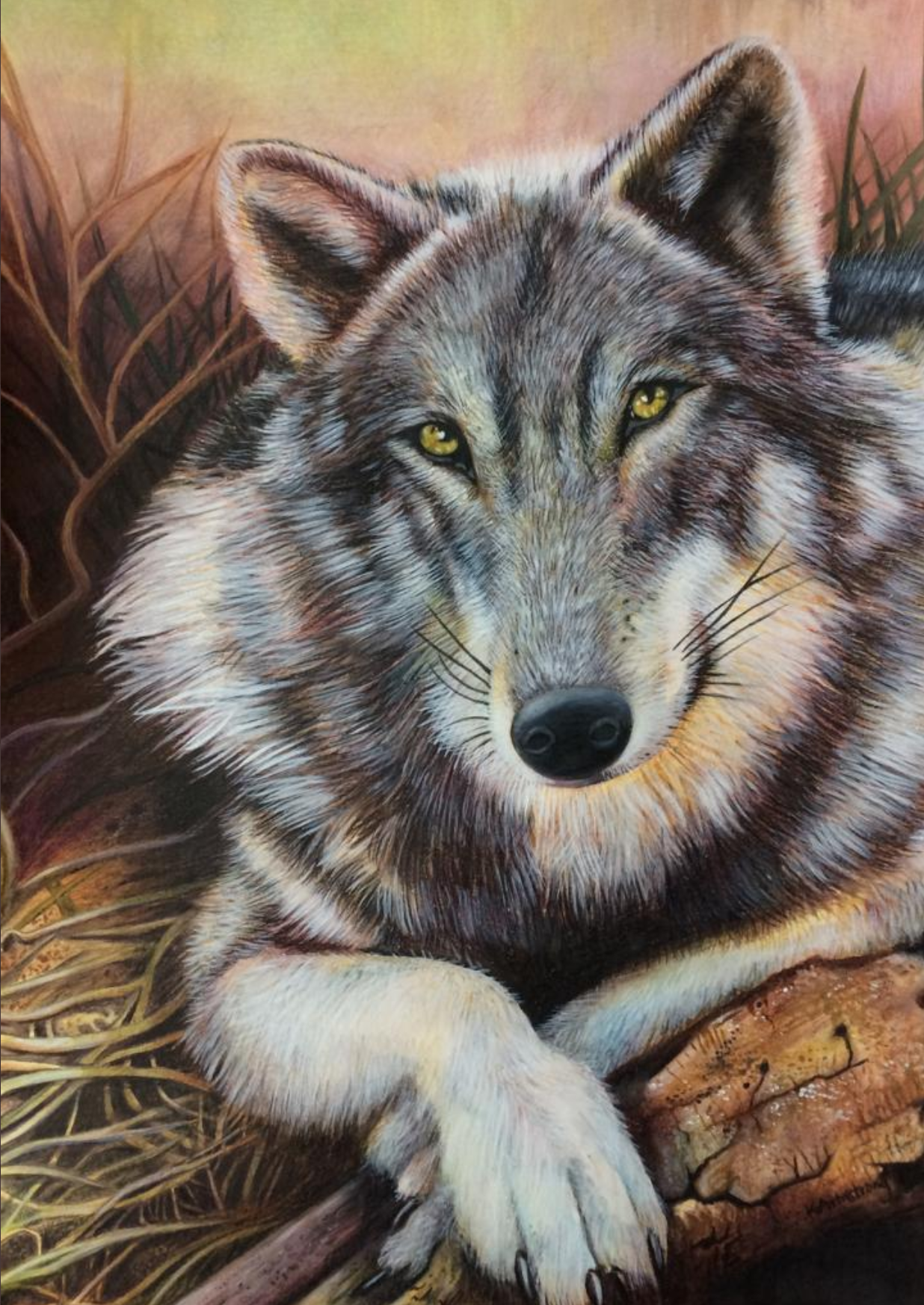 All wolf artwork by Kirstin Armstrong

One eye shines with sky-wisdom
The other, by now ferocious ruby red
Colour of mega-fires
Shade of blood for all the fallen animal-kin

Nature are poisoned
Hurt
Ravaged
Out of balance
A continent burning

The wild howl will break sleep
Until the fallen are remembered

On Being Pursued By A Wolf

Their nattering had gone on long enough.  The wolf crooked its enormous head suddenly, and they ducked down lower behind the boulder.

They quietly listened for its next move; but heard nothing.  Stinson turned and eyed up the pathway, but Littlewood gripped him by the arm, shaking his head dismissively.

The silence was broken by growls like an engine rehearsing; the wolf had started to advance, slowly, with methodic composure.  Littlewood peeked up to see where the beast was and when he saw it had clocked the boulder they were hiding behind, he let go of Stinson’s arm, and whispered, ‘Run.’

They upped quick and made for the pathway, and the motion blasted up a geyser of dust which half-screened their escape, an inadvertent covering manoeuvre; however it was a narrow passage they had come through, and in the scramble to get there, they forgot that both of them couldn’t fit through the entry at the same time; so Stinson, in the last second, halted and said to Littlewood, ‘After you.’  There was no time for competitive politeness, so the Captain hurried on first, and Stinson slipped through after him.

The wolf howled aloud when its eyes caught the obscured figures of fleeing men, but it was so hyperbolic a howl – a public display it wasn’t used to giving anymore – that it brought on a fit of coughing, and it had to take a moment to gather itself before beginning the chase; this gave Littlewood and Stinson some time to make tracks.  And plenty of tracks they made.  If that pathway had been starving for footsteps before, it was now enjoying a banquet as the absconders thundered along its surface.

Stinson had never run so hard in his life.  He had never been athletic.  His teachers at primary school thought him highly batty when he declined to join the cross country team saying he had all of St. Alphonsus’s Theologia Moralis to finish reading.  And he did finish it…eventually.  That was a form of long distance running, he had forever told himself, though it hardly set him up for this undertaking.  If only St. Alphonsus had included a tenth volume: On Being Pursued By A Wolf.  For Stinson was short of breath fairly fast and he had nothing but all that faith and learning to support him.  He thought he would be fitter.  He was young, apparently healthy, had lived a pure life; but a delicate life unquestionably.  Had he squandered purity returns on this trip?  He’d wager yes if he was so debauched as to place a bet.

Littlewood, on the other hand, had been more than willing to sign on with the cross country team and won medal after medal throughout adolescence, so he was now making headway.  He kept looking back at the angel-faced one and shouting, ‘Faster!’  But Father Stinson couldn’t go any faster.

A maelstrom of wolf-noise resounded as they ran.  But it came from above, not behind, for the wolf had opted to pursue them in the hills overhead.  They could hear it making great leaps and landings on the rocks.  Growls and scrapes.  Thuds and rasps.  And the occasional wheeze.

Littlewood made it out of the hills first.  The heads of those ridiculous sunflowers were a sight to behold when he got there, sticking out of a recently-come fog like bright and perky periscopes, mustard stares on their endless father in the sky – like wee ones watching their old man leave for work – as it slinked away again into the cloud.  Littlewood checked on Stinson who was still chugging along in the passage behind him like a man three times beyond that age.  Then he looked to the hills for the wolf.  But saw no sign.  All he could see and hear were signs of bankruptcy in the panting young priest.  Maybe the creature had chosen to go back to its cave because it was tired and ill and wanted to sleep.  Or maybe it had fallen and broken its neck.  Chance would be a fine thing, but there had been a notable lack of fine things over the course of this journey.  Apart from Katrine.  Yes, she was a fine thing alright, he knew that well.  Granted, he had tried to suppress the feelings he had towards her for a while, but it was in situations like this the fine things always sprang to mind, bold and transparent.  Right when they looked to be lost.

He turned to see if he could make out the others in the distance.  They must have that grave dug by now.

But it was hard to see anything.  They had come rather a long way and the haze had grown thicker and what light there was had dimmed to some extent.

When Stinson finally reached him, all haggard and weak, he said, in a ruptured voice; ‘Why…have…we…stopped?’

Lament Of The Wolf

Watching the ripples splaying into an unending circle, made by the landing of the Grebe, until the wavelet gently reaches the shore dying on the lush ground, already sopping up the blood of my mate and young, I pray for forgiveness.  The sunlight reflects the surrounding beauty of the wilderness.

We came stealthy in the night, carrying the babes, soothing, hushing, communicating the danger that pursued us.  These woods are our home given by the Great Spirit for our use, for our welfare, to live in harmony.  My family circle has spiraled, through many eons, to arrive upon this day of sorrow.

The great thunder of the massive birds that spit forth death found us as we flattened ourselves to near invisibility, forgetting these demons can see through the dark while gleefully meting out death.  My mate riddled with holes as she tried unsuccessfully to cover the babes beneath her. I, her mantle as the end of my blood slithers off my muzzle, pooling at the feet of the hunter.

“This is the last of the wolf pack men.  Good night’s killing.”

As my spirit rises, joining my ancestors, I call the Great Spirit to forgive our killers, allowing them to understand His love for all creatures.

is an artist and teacher from near Glasgow. is an artist and writer based near Glasgow in Scotland. Inspired by Scottish landscapes, myths and legends, and a whole variety of wildlife, her artwork has been exhibited nationally, including RSW and the Paisley Art Institute. She enjoys working with watercolour, gouache and mixed media.  Her writing and short stories have been commended for their rich historical detail and vivid imagination. https://www.kirstinarmstrong.com/

has contributed to The Anthropocene Hymnal – Songs of a self-defining era. A poetic response to the joint crises of climate change and biodiversity loss. (An Experiments in Fiction Publication, 2021)
Through The Looking Glass: Reflecting on Madness and Chaos Within (Indie Blu(e) Publishing, 2021), and The Poet’s Symphony (Raw Earth Ink, 2020)

2 thoughts on “#WorldWolfDay, #InternationalWolfDay Anybody written poetry unpublished/published, made artworks or have photos of wolves? I will feature all contributions in today’s blog post.”