I begged a Robin yesterday
if he had seen a Rose.
He cocked his head
and wryly said
that I should not suppose
a feathered creature
such as he would know
where Beauty grows.

Today, I stopped a Bumble Bee
for, surely, he would see,
from buzzing
back and forth all day,
if rose-buds graced a tree.
But Bumble Bee
just looked aslant
and would not tell me why.
He only said
he’d search the Earth
if I would search the Sky,

THE YOUNG GARDENER MAKES HIS EXCUSES

A weed is not a flower.
But once rooted both will flourish.

Given sunshine and rain
in equal measure
a weed may grow tall as a hollyhock.

Or creep though alleyways or
over fences and walls
as pretty and as modest as aubretia.

A weed may bring its kisses to pavements and ginnels
cover life’s cracks with
coloured stars.

Should we not admit these to be
as lovely as the harebell —
though nor scented like the sweet-pea or
the honeysuckle?

A weed is not a flower; a flower is not a weed.

But the bumble bee sips
where he finds most sweetness
and the butterfly dances after beauty.

What does it signify in love’s high summer
if a whisper is is deemed
secret or lie?

A bee flies through space, loaded
with all it can hold. It does not wonder
at the miracle of itself. Merely persists
in a realm that has never heard a buzz.

This isn’t a metaphor.
There are no turtles all the way down.

Here’s a real brainteaser:
a honeybee, flying out to sea.
What islands, what nectar,
what ambrosia call?

Sitting on the deck facing the Sound,
the whole raft of imponderables drift by
every six hours. What currents run
beneath the surface; why am I unmarried
at 53; what are the consequences
of freedom; and even, at high tide
when the kids dive in and shout,
what is black and white
and red all over. Shadows progress to shade.
The first leading edge of vapour
drifts in after sunset. The wind dies.
We’ll be socked in soon.
With dark fallen I can’t even see the water,
and all knowledge is revoked.
Minutiae consume me, become ritualized:
running the dustbuster after the dogs;
rearranging the photographs on the fridge;
polishing the leaves on the ficus;
the ceremonial unloading of the dishwasher.

Nestled under the crazy quilt,
I listen to the muteness outside.
The soft, repeated hush of the wavelets—
barely even ripples in this calm. The sudden report
and roll of an acorn on the roof.
Latimer booms in the distance;
the occasional ground swell
triggers a bell-buoy. Everything sleeps,
including me. But my dreams
remain alert and active: they quest
for love and success, light and absolution.
A bright streak in the darkness,
a flash of determined gold.
A honeybee at sea.

-Dr. Jennifer A. McGowan (from her chapbook Sounding)

And a frivolity of verse:

Summer laughed
a humid breeze
the sight of a single rose

lifting her spirits
as a blizzard of bees
busied with purpose

Defined by its fatal desire for more
Antennae ragged, blackened with the bright
And white-hot kernel at the candle’s core,
This soft-winged, heat-drunk warrior of light,
Charmed and enflamed by phototaxic lust
Re-gathers all its primitive life force
To smash its quivering body to grey dust
In its addiction-led, predestined course.
And just like them, though my own wing tips burn,
With junkie-like predictability
To your relentless, boiling sun I turn,
Flying towards destruction willingly.
Ash in my hair, my mouth, my bleeding eyes,
Dying to live within your fire the prize. 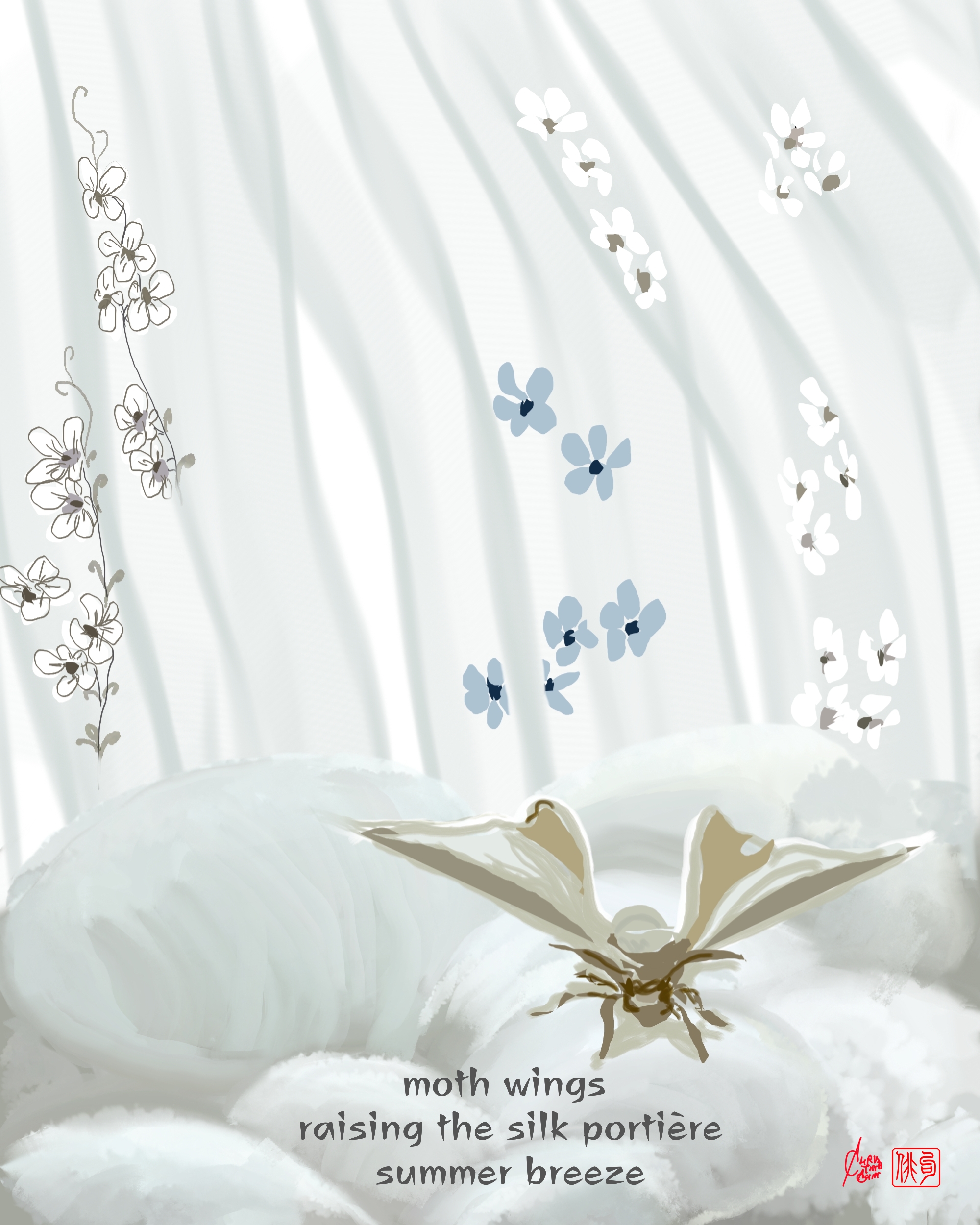 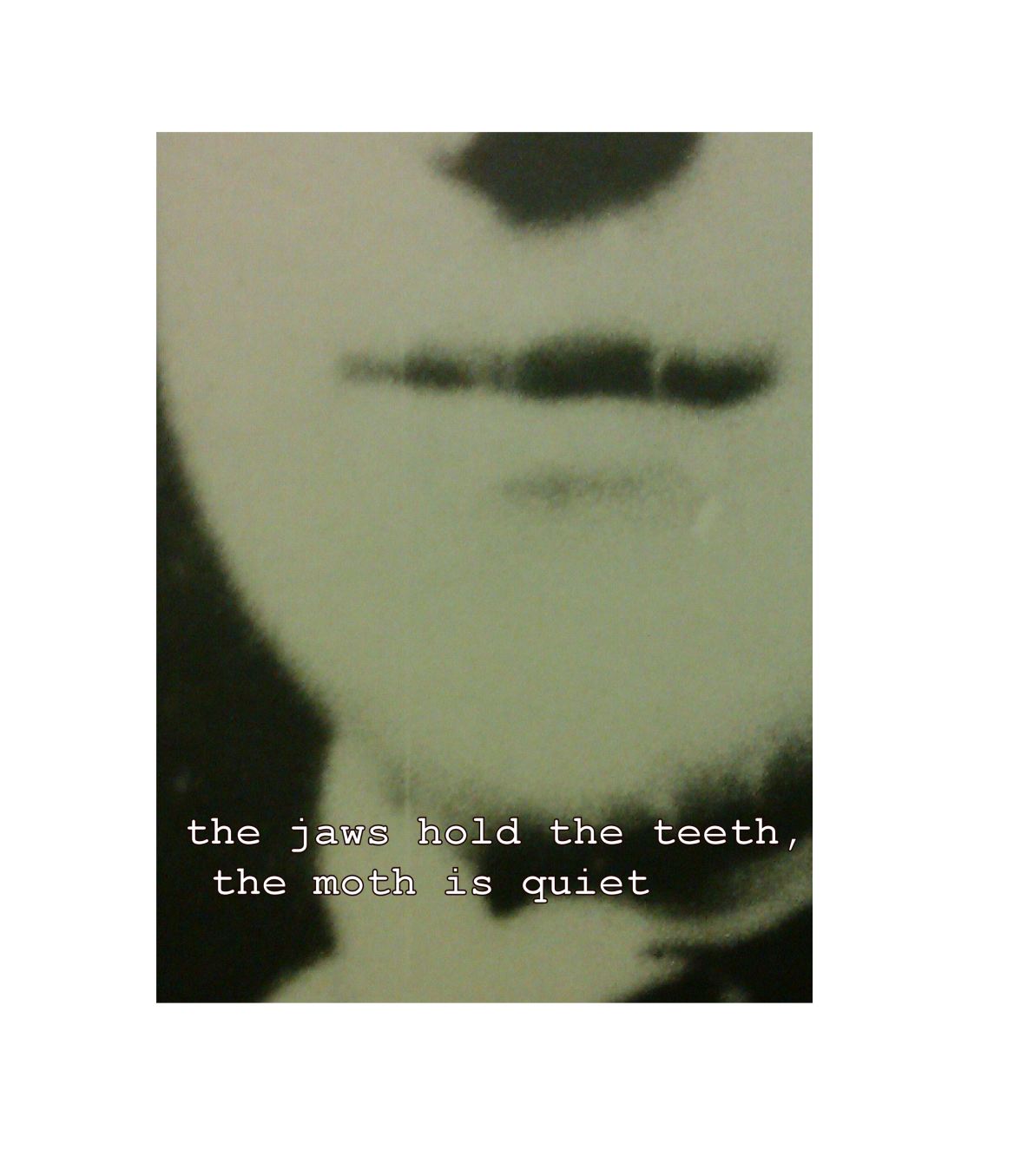 It darts, bares a blaze
of underwing to plain sight;
this endless, fragile need
to make a mark,
to come to light.

A hundred moths made a lattice
on blue-black window pane,
some the size of wrens,
others torn corners of paper:
a nightly frantic race of wings.
You were an erratic pulse,
a low flicker against inner
walls. I took you for an itch
for more, the reason why
I could never keep still

In the light hours they burrow.
Walls accept, cracks and

inner crevices welcome.
Something borrowed from another blue,

wind-remnants, a miniature world
tucked in wings, known by rote

from all in flight before them.
Crepe-powder, talc, pollen.

When they succumb to open
they make the house fly.

No pain yet. White cells
move as if in stocking feet,
heel and toe to bone and pancreas.

Lamp-lit, she sits smoking
on the Scotchgarded sofa,
looks out at nothing because it’s dark.

The window is breaking
the sound of waves in the quarry.
The moths keep hitting the glass to get to her. 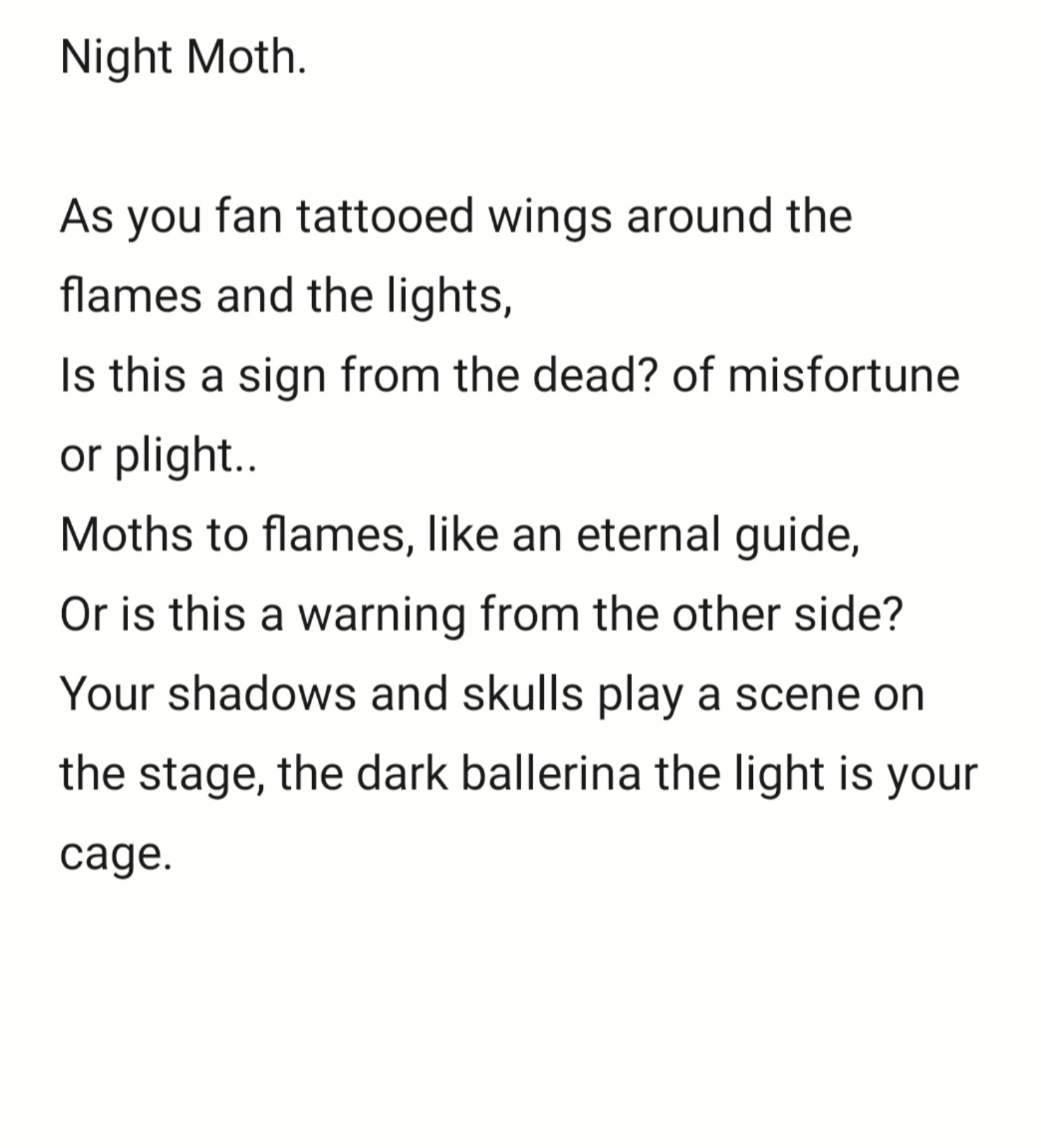 Moth!
There once was a tailor of cloth
Who fought with a wily old moth
He gave it his all
And it bounced off a wall
And landed fair square in his broth

Under I wait till dark. Light lessens. Beak
stab shakes where I am. Dark. Out from Under
chew tender stem. Move back Under when heat
of many Over brightens. Asunder

I dig. Push asunder. Turn and turn and
turn. Under under. Legs tendril lengthen.
Softness to float in the Over expand.
I hear now, inside trembles at sound when

others outside call in dark to know where
they are, and what meals move around the dark
Soft and wet I push asunder to air.
Listen in bright while softness rustles hard.

Even insects remember their young times.
Pests like weeds try to survive humankind.

is a broadcast journalist, freelance engagement consultant and writer in South Wales.

She writes poems for enjoyment – and when they land in her head.

Her writing has appeared in various editions published by Back Bough Poetry, as well as the Wombwell Rainbow, The Tide Rises, Falls and has featured as Spillwords Author of the Month.

is a writer and co-founder of the small indie publisher Dunlin Press. He grew up on the edge of the Lake District, lives in Wivenhoe, Essex. He is regularly published in poetry journals, also works as a journalist and sometimes lectures in creative writing. His second collection of poetry, Pomes Flixus, is available at https://dunlinpress.bigcartel.com/.

is from Manchester, and has lived for many years on the Atlantic coast of Ireland. Most of her recent poems are about the sea, and her coastal community. Her poems are published in Ireland, the U.K., the U.S. and Australia, and her collection Thimblerig was published in 2013. She has just completed a PhD on the poetry of Anne Carson.

is an award-winning novelist and poet. Her sixth poetry collection, The Celery Forest, was named a CBC Best Book of the Year and was a finalist for the Fred Cogswell Award for Excellence in Poetry. Her debut novel Quarry won an Independent Publisher Book Awards gold medal for fiction, “The Very Best!” Book Awards for Best Fiction and was a finalist for the Sarton Women’s Book Award for Contemporary Fiction and Fred Kerner Book Award. She teaches creative writing at the University of Toronto where she won an Excellence in Teaching Award. A previous winner of TIFA’s Poetry NOW, she currently leads their monthly Book Club. Æther: an out-of-body lyric appears in 2020 with Wolsak & Wynn/Buckrider Books. www.catherinegraham.com. Tweets at @catgrahampoet

writes and performs, usually with the Tees Women Poets Collective. Her work has been widely published online and in print, most recently in Dreich anthologies, Amethyst Review, Green Ink Poetry and the anthology Hard Times Happen (Black Pear Press.) She was Highly Commended in the 2021 YorkMix Poems for Children competition and her poem video, Dracula’s Café, was shown on BBC Upload Festival 2021. Her poetry chapbook Watching a Heron with Davey is published by Black Light Engine Room Press.

lives and works in Sheffield.  For 30 years he worked in education with vulnerable and neurodiverse children before belatedly discovering that recent governments may not be prioritizing the marginalized in society.  Now he trains people in positive mental health and how to recover from the pandemic.  He writes poems, paints, chops logs, cycles everywhere and shops local.