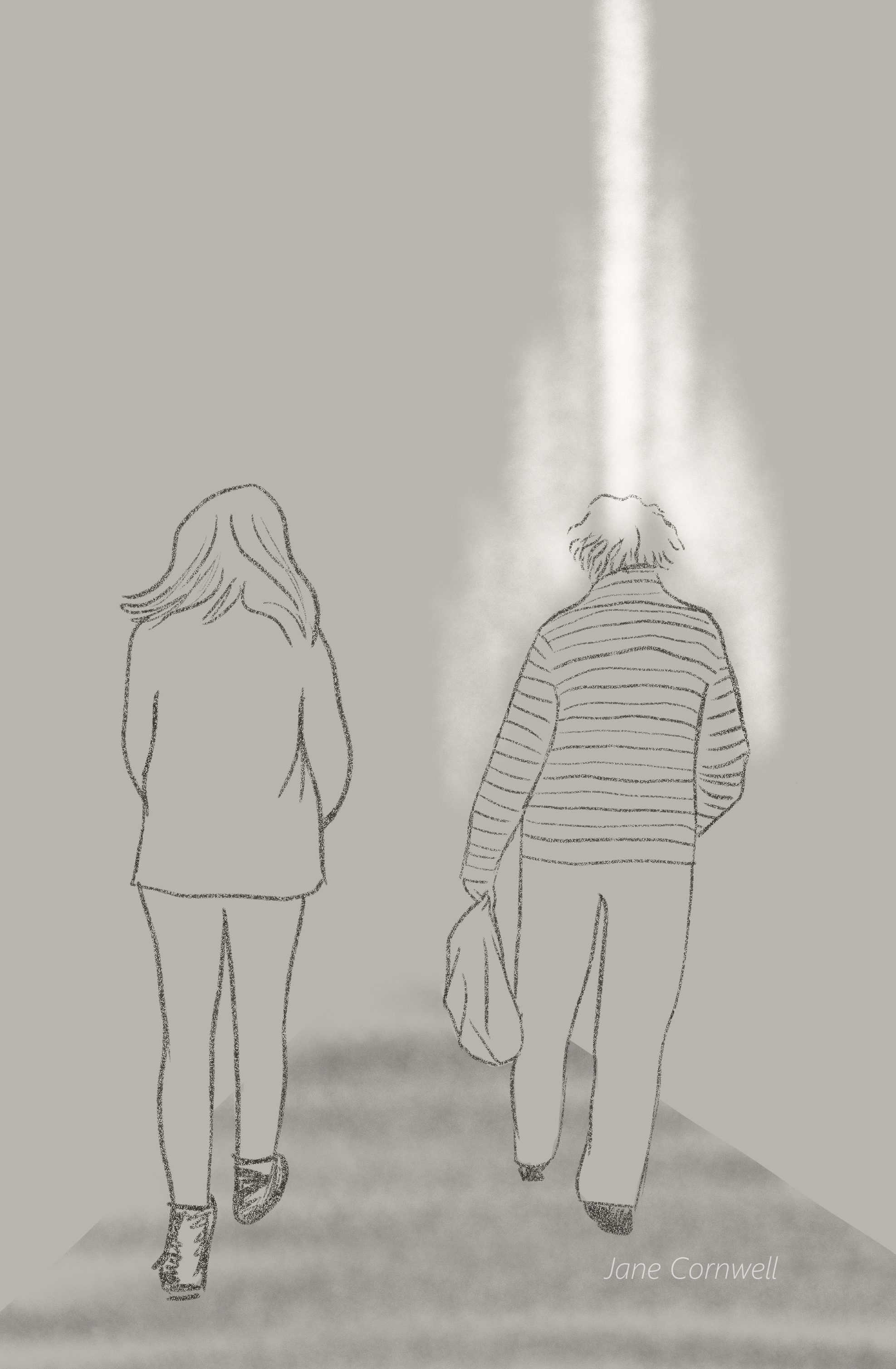 The lad was sad, so sad
Because vegetables was all he had
Grow on the sill to his tiny pad

He wished, oh how he wished
He had some coin for meat or fish
Something to make a filling dish

But his mind was set, firmly set
He would give something to the homeless old lady he’d met
She smiled like his nan and called him pet

So he gave her a salad to eat
Then offered his bed, so she wouldn’t sleep on the street
Don’t want to burden, she said, but thought him sweet, so sweet

The foggy street
scurries beneath their feet.
Two of them walking,
the daughter in cardigan
and pullover and jeans,
and her hands bunched in
and pendulating as one,
her father quivers,
an apparent apparition.

The morning looks for more people,
albeit this, a plague year,
the emptiness is full of people gone,
inverted hallucinations of those who live.

I know them. I must be one of them.
I call my daughter, “Holla. It is
okay to feel sad before the day reels.”

He was dressed every morning
in running shoes,
comfortable pants, a jacket
and his signature leather belt,
ushered to a breakfast he never ate,
set free to roam.

Most afternoons I knew
he could be found
pacing the halls,
searching for an escape hatch.
We walked together,
checking the same locked doors,
again and again,
looking for secret passageways.
He was notorious for setting off alarms.

The promise of ice cream
or music
served as temporary distraction,
but he always returned to his search,
tracing footsteps through hallways
that never became familiar.

Every visit, he would ask me,
“when are we leaving?”.
I would tell him thirty minutes.
It was a lie I told him to keep him happy,
a lie that chipped away pieces of my heart.
He would never go home again.

Two of my own species, seen from behind
Down a grey corridor- a little light reflects here
They walk away, what they leave, what they find
What they lose, what they approach, nothing is clear

The man, the woman – is it two women though?
Dressed in everyday drab. No season for style
Who will await them, where will they go?
If I saw their faces would they know how to smile?

This grey corridor is closed, it is empty like a heart
In a world, in this world, in a year, in this year
They walk away, together they seem, but also apart
One holds the bag they give you to carry memory and a tear

Two of my own. Grown weary with departure
They walk away. Walk wary, this is a year of rupture.

The morning glowed, spring-scented,
the air seemed full of promise, contented
they talked of ordinary things, the commonplace–
conversation as comfortable as their pace–
the children, the news, that new restaurant—Thai–
that they never got to try–

Yet does he walk beside her—
there where the branches stir?
The pace still comfortable, the air still aglow?
There’s a sparkle on the water, catching the flow
of currents and light. Yet only one shadow, no talks–
the birds keep her company on her walks.

to know that you’re not there
at the end of the line
with comforting words
and questions about the children.

I wish that I were eight again,
looking round and thinking
you had gone, then a wave
of relief as you re-appeared.

There’s no magic number
of seconds that can tick over,
after which it won’t matter any more.
No soothing words of comfort

when you don’t believe in afterlife.
It makes you envy those who do.

Now that is strange.

Salad days, green and full of sap,
and all the summer stretches
through green boughs to a mellow field
of buttercup sun at sunset
and again at morning.

Colours fade and loves;
we wilt in the heat and the frost bites.
No ruse can stop the slide into the dark,
but if we keep tight hold of the best of days
and the heart of things,
we can slide together
with grace
and just a hint of regret.

is all it was. After he ate salad.
The light struck him on the head.
Homeless. Salad made her lose, made her mad,
so nights into Spoons for coffee and tea.

Lettuce, cucumber and tomatoes killed
him as sure as this bench is a good bed.
They attract the light you see, filled
his head with it so no room in his head.

She will never eat salad again. Would
not have it in loved marriage home they shared.
Salad made her lose home. As if grief could.
Times she told them at work, till work declared.

Odd we don’t want to see it as it is.
Blame is placed on seeming slightest distress.