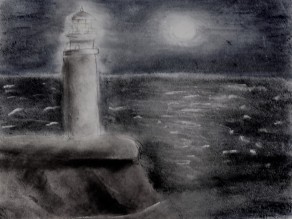 There is a short poem towards the middle of Clarissa Aykroyd’s debut pamphlet Island of Towers which is called ‘Lighthouse’ and in which an island and its lighthouse are metaphors for a person sighing and sobbing in their sleep. In three brief couplets (the third separated from the first two by a couplet-sized blank space, perhaps indicating the eclipse between flashes from the lighthouse) we get a powerful impression that the sleeper is lost in their own darkness, one more profound than the dark of night or sleep. “Morning hasn’t come” we are told, as though it should be here by now but has failed to arrive. Whatever this sleeper’s darkness is, it remains despite the fact that “the lighthouse lifts so high, (and) the island / streams with light”.
This image of an island with a tower sending its searching light out into the unknown is not only towards…