From Her Own Mouth

When I was caught and put in chains,
they etched these wounds across my skin.
Whip-deep, the edges snake
from shackled neck to hobbled feet.

Then I was forced with all the rest,
a mass of human flesh bound tight
inside a narrow hold, the ship
dark as a mouth except it roiled

as I forgot my name, the land I held inside
tipped overboard, lost to the waves.
Weeks passed till land was reached.
I did not know the air, cold as these men

whose strength lay in the use of whips.
They walked me to a block,
as other men in their wide hats called out,
the price they said my flesh was worth.

It taught me this – I was not I but that –
a thing with breath they moved into a cart.
Then onto an estate where we, the mass,
looked up at master in his white house.

Just beyond, a forest of dark ghosts
was home to vermin and slave quarters.
An overseer crept across a path
to touch my breasts till they held shame.

My sex was sport to him as I lay down,
each child I bore sold off. Their cries return.
When I work in the fields, a soughing sound
comes back to me– I am. I am. I am. 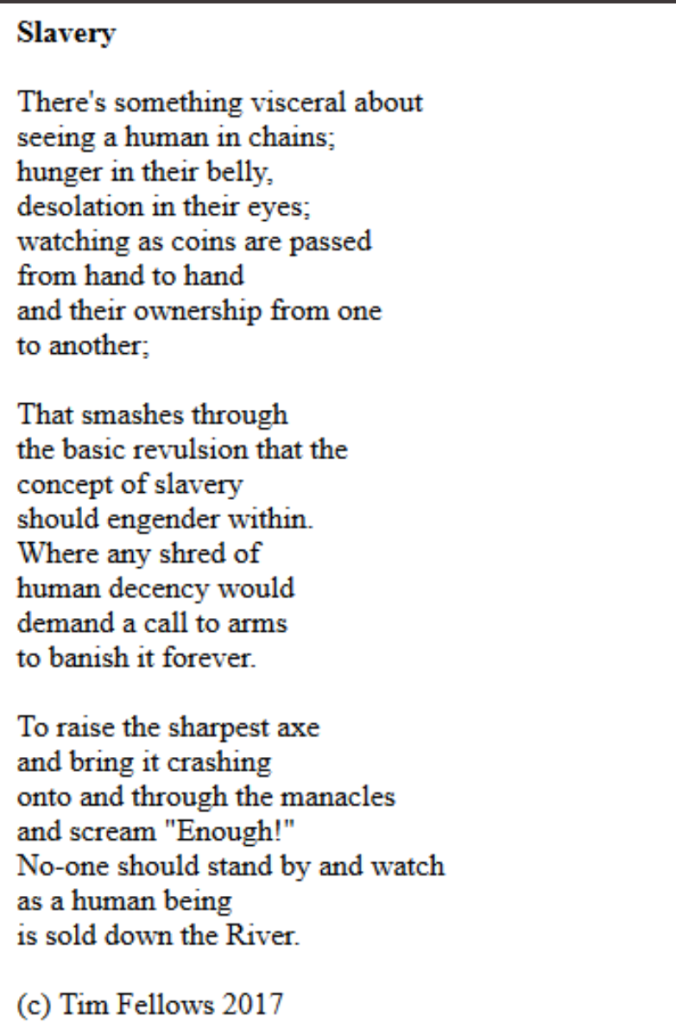 -Tim Fellows (“Slavery” was published in 2019 by Glass Head Press. It is available from the author for a £5 charity donation – email timothyjfellows@gmail.com for details.)

Because there are more atheists in heaven, a religious mob drove
both sinners and saints to the mercy of the sea. Stateless, they drifted
on land allegedly not their own. Landless, they drift on disputed
waters everyone claims to own. (If they can fly, not necessarily
on airplanes, they would, and risk getting shot down for not identifying
themselves properly upon entering an Air Defense Identification Zone.
Stateless, so no passports in their hands or pockets while wings flap
and bleed from their backs.)

Boats, floating detention centers of mothers cramped and cradling their babies
whom they can’t rock to sleep for lack of elbow room.

Boats, wooden vessels as unremarkable as their passengers are unsuspecting
of being deliveries of live meat to expecting brothels.

And even among their own, dreamers not of mansions and luxury cars but of
meals three times a day were sweet-talked to a ride, sweet-talked for a ride,
sweet-talked and taken for a boat ride — by their very own.

Boats, among which Mohammad Tayub rode and immediately realized
the shattering of his dreams till his parents eked out the ransom.

Boats, pachinko balls filled with the dead and dying bouncing from one unwelcoming
island to another unwilling to add more suffering to its shores.

(Centuries ago, in other parts, unwilling passengers
thought of the sea as land: blue and quivering but solid enough
to carry their feet. So they jumped overboard for their last sprint —
downward.)

From an imagined world where

is good for you. All folk
should be chained,

Manacled to a mortgage,
to work, to an employer

Teaches you the meaning of life.
Demands you act properly.

Constrains you to common sense,
sets out a wild world of imagination

creativity and invention. Freedom
is too wishy washy. Lock

and load your chains. Don’t let
loose and free your mind. Freedom

Is heavy, restricts, denies movement
of blood, bone and brain.

Become a slave and see our world
With new eyes, fresh perspectives.

is winner of the Aryamati Prize, the Segora Prize, a Bread and Roses Poetry Award, the Fosseway Prize; and joint winner of the Geoff Stevens Memorial Prize 2019. Her poems have been published widely, and a debut collection, Her Lost Language (Indigo Dreams Publishing) is one of 44 Poetry Books for 2019 (Poetry Wales); and a Jhalak Prize #bookwelove.

A forthcoming collection, Map of a Plantation (IDP), will be published in April 2021.

is a poet and writer from Chesterfield. His poetry and politics are strongly influenced by his family and his upbringing in the Derbyshire coalfields.

-Karlo Sevilla,
from Quezon City, Philippines, is the author of the full-length poetry collection, “Metro Manila Mammal” (Soma Publishing, 2018), and the chapbook, “You” (Origami Poems Project, 2017). Recognized among the Best of Kitaab 2018 and twice nominated for the Best of the Net, his poems appear or are forthcoming in Philippines Graphic, Small Orange, DIAGRAM, Black Bough Poetry, Ariel Chart, The Wombwell Rainbow, Matter, Fevers of the Mind, Splintered Disorder Press, Months To Years, 3 Moon Magazine, and elsewhere. He is also one of the contributors to “Pandemic: A Community Poem,” Muse-Pie Press’s nominated poem for the 2020 Pushcart Prize.