I am honoured and privileged that the following artworkers local, national and international have agreed to be interviewed by me. I gave the artworkers three options: an emailed list of questions or a more fluid interview via messenger, or an interview about their latest artwork, or a combination of these.

The usual ground is covered about motivation, daily routines and work ethic, but some surprises too. Some of these artworkers you may know, others may be new to you. I hope you enjoy the experience as much as I do. 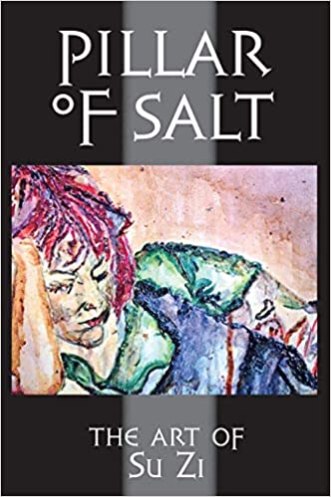 is equal parts writer, artist, and badass eco-feminist.  She holds an MA in English and has published in such places as Driving Digest, Exquisite Corpse, and Blue Heron Review (where she was nominated for The Pushcart Prize). She resides in Florida with her horses, dogs, cats, and turtles where she runs The Red Mare Chapbook Series.

As a kid. I distinctly remember becoming increasingly fascinated with making objects that existed in reality that were drawn from my thoughts. I have one piece from then that somehow survived my tempestuous life.

1.1. What was the fascination with making objects?

The fascination then and now is making an idea exist in our reality.

2. Do you see the image clearly in your head first, or work towards the finished product subconsciously?

Mostly subconsciously. I have the genre/ art media decided upon, and go from there. Some projects are more organic in evolution than others. Some end result in a more traditional look, maybe, than others

3. Do you have favourite materials to work with?

Well, since every art media requires a capitol investment in supplies, there are some that I probably will not explore more anymore: glass, for example. Currently, I work in printmaking, bookmaking, fiber, paint, dye and pottery, and such things as soaps and salves

4. Who introduced you to making things?

I also occasionally garden, which is a different kind of building ideas into reality, a folk art, maybe. Well, there were various types of assignments in school, and in the little girls troupe to which I belonged. At some point, I became entranced— I remember discovering painting.

I had an assignment to depict the American Revolution. The only paper I had was shelving paper, so I decided on a panorama. The only paints and brushes I had was the one brush in a tin of 8 watercolors. I was frustrated with how I only had one green I could mix into shades. My mother took me to this local mom n pop art store, and they all got me a few watercolors in tubes. When I sent back to my project, I was entranced with how the additional pigments added to much to the image I was trying to create went.

5. What is your daily artwork routine?

It varies. I can no longer work in my preferred method, due to the debilitating effects of the damn Crohn’s, which was to do marathon sessions that sometimes lasted for days at a time. I have an unreliable amount of energy these days, and my process is under evolution constantly. Some projects are more amenable to be allowed to sit for times between work sessions, other projects require dedicated time because the media will not forgive lapses in time between sessions— dyeing and pottery come to mind. Collaboration is something I do with Red Mare, the poetry chapbook series I have been making for over a decade. I did a one shot collaboration with a Poet, who put a poem to a drawing I sent her for fun.

6. What motivates you to make things?

I feel as if I must. Even when I have found myself in circumstances not conducive to art, I still sketch

7. Who introduced you to artwork?

Interesting question. My parents had prints up, cubists in frames. I was a wee little kid and I saw these everyday. The idea that an image can be something, but not be an exact representation has stayed with me. My parents took us to museums, so I had a sense of painting, high art as it exists in reality. I was in love without realizing it. I studied art books… one was very influential. I also viewed feminist work when I was an undergraduate, and that has held sway with me since,

7.1 Which one was very influential, and why is it so?

For actual people I knew, there were the other art oriented kids in college, so I felt that it was a perfectly reasonable interest to have. Direct aesthetic influence though, alas , has been limited to one woman showing me very basic yarn craft, etc.

I remember when I discovered Andy Warhol. I was a preteen girl and I saw his work and was thunderstruck.

I must also testify to two enduring influences: seeing a display of suffragette pamphlets, discovery of the Roycrofters and also I had the great privilege to see in person the full installation of The Dinner Party.

7.2 What thunderstruck you about Warhol?

His vision, his awareness of and recontextualization of everyday images, and his energetic use of color

As I learned about him, he built art communities, and it’s still a rare and amazing thing.

7.3 How did the suffragette pamphlets endure for you?

They were small books. I just felt physically responsive to these small books. Between those and the books of the Roycrofters, I developed a life long affection for little books. The impetuous for Red Mare probably springs from this.

8. Who of today’s artworkers do you most admire, and why?

Amzie Adams— a painter in New Orleans. He is one of the few artists whose work I acquired multiple pieces from. Amzie’s work has a delicate balance between representation and whimsy. He is visually an expressionist , but the culture of New Orleans is steeped into his work. Red Focks is a painter, among other sterling talents, an abstractionist . I have both a painting and a book with his painting reproduced on the cover. Belinda Subraman is a hugely important arts person, both for her ever evolving own work, and the huge effort she brings to the arts community

9. What would you say to someone who asked you “How do you become an artworker?”

10. Tell me about artwork projects you are involved in at the moment.

I am sewing up— literally, as they have handsewn bindings— Red Mare 20. This edition was sponsored by Poets and Writers Covid Relief. The poet is Jillian Weise.8:53 PMI have a book of poems coming out this weekend, Chicago Poems, from Breaking Rules. It’s the ghost manuscript finally seeing light of day—.