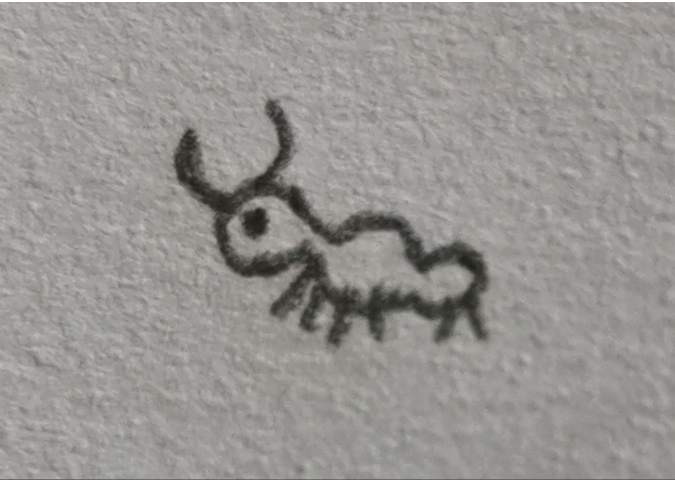 i am sorry that i used to collect you in matchboxes
in my pocket, far away from the rest of your family

I thought I'd read you my poem, 'What do we do when the water rises', which takes inspiration from the fire ant in times of crisis. #InternationalPoetryCircle pic.twitter.com/QsWc5mXO1a

Ants in their city of sisters
sing molecule lullabies

my animal heart
my nettle nerves

does the butterfly remember
what the caterpillar knows?

Perceive the ants
Toiling hard
Constantly collecting countless
Grains inside the Earth
Crawling in line,
Oblivious of time
Fearless of being crushed
Treading unawares,
Little creatures greatly great.
Presenting a lesson
Of unity and discipline.
Engrossed in their work,
duty they do not shirk.
If so little an insect
Can be so perfect,
I regret so say, that man
Has still a lot to learn
To earn, to live, to give and grant
To work and work like…
The little Great Ants. 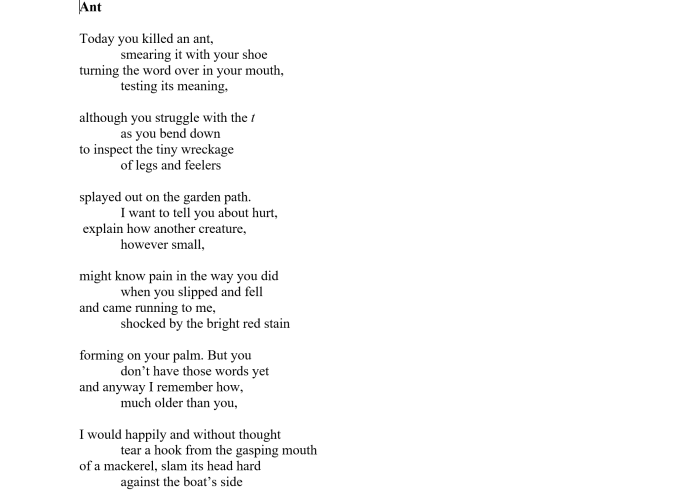 My tribe the Dorylini,
we were there when
the continents broke.
I am an army ant.

My mandibles are strong
as is my armour
and if you believe
then I have wings.

We are nomads
destroyers…
Eating anything
that gets in our way.

I have loved queens
and fought armies.
When my legion rests,
I compose laments
of love and death
and the futility of marching.

My poems are formed
from chemicals
and pheromones.

Don’t loiter in my path,
listen for I am close.
My antennae will
know you and I will
take your life.

these mites and flies, unneeded
thoughts, prick painful memories,
as they sip my Corvid blood,
shit and sick beneath my wings.

Must sit in a nest of wood
abided ants, who alarmed
swarm all over me, and burn
off waste with formic acid.

Envy pheasants as dust in hot
ash from bonfires, and more so
the Jay as steals a lit fag
to fry their unwanted pests.

Here’s someone
broken free of wherever
they’re supposed to be,
venturing along your arm
as easy as a person
going out to buy the morning paper.
Pausing, perhaps to listen
to the wind in the poplar trees
shivering above you both;
his future, momentarily,
in the palm of your hand.

I wouldn’t be surprised
if a few of these ants
have begun to lose faith
what with the summer wind gusting
so wildly about them,
the tall grass sounding like a sea
preparing to part itself.
What’s to stop one or two
falling behind?
Forsaking what may come
for the pleasures
of this earthly afternoon,
sheltering in the shade
of a dandelion or curling
beneath the marble temple
of your naked arm.

An ant wends
between my boots

Your trail unplanned, unkempt
unruly this way and that,

yet, looked back on
your path dignified,
august.You define

it by use. A search
for provisions others
may follow. An invisible
map to some.

is poet and translator who works as a Spanish Professor on the island of Oahu. Poetically he has published poetry chapbooks in Spanish in Peru and Spain and has published two full collections of poems in Spanish, the most recent being Robos, Setas & Sombras(Huerga y Fierro, 2014) and was included in the anthology: Disidentes: antología de poetas críticos españoles 1990-2014. (La oveja roja, 2015).
Zach continues to write in Spanish but on occasions will write in English. Termites: the illegal occupation of paradise is his first poetry collection written entirely in English. In late July 2020 his second English collection Beyond Heroin will drop with Hesterglock Press.

is a poet and illustrator based in Northampton, UK. His second collection of poetry and drawings, Afternoon Music, is available now from Palewell Press.

first collection “Animal Experiments” was published by Bad Betty Press in June 2020. Her first pamphlet “Advice for an Only Child” from Flipped Eye was shortlisted for the 2015 Michael Marks prize. She is obsessed with ants and always carries a magnifying glass.

has published two full collections, Hare and Kin, both with Cinnamon Press. He lives in Brighton and teaches at The University of Chichester.

is based in north Wales. He is a poet and the founding editor of Oystercatcher Press. He has produced innovative versions of several classic Italian texts. His most recent book is ‘A Berlin Entrainment’, from Shearsman.

poetry pamphlet, How High Did She Fly, was joint winner of Live Canon’s 2019 Poetry Pamphlet Competition and was published in Nov 2019, and her hybrid particle-physics-inspired book ‘and what if we were all allowed to disappear’ was published by Guillemot Press in March 2020. Tania is also the author of a poetry collection, a poetry chapbook and three short story collections, and co-author of WritingShort Stories: A Writers’ & Artists’ Companion (Bloomsbury, 2014). She is co-creator of
@OnThisDayShe
, curator of short story hub ShortStops (http://shortstops.info) and has a PhD in creative writing inspired by particle physics. http://taniahershman.com