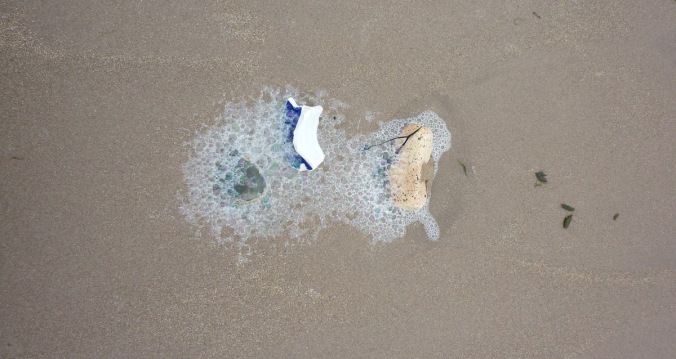 Murakami’s cats, the peeling memory, an unhealthy preoccupation
with Studio Ghibli animation, an unhealthy preoccupation with
certain social media accounts, with line breaks that you have to
get over – eventually. Ninety-percent of my life is devoted to
upsetting people with a line break, forming only at the preposition.
It seems, most of the time, this is more upsetting to / some people
than the combined human rights violations of, say, North Korea.

foam is ok , like this sea stuff
yet pea foam leaves me wanting for regular
food
without the mouth sensation

by the sea
seagulls fly

You never asked what happened
to your favourite mug. On my way to the ocean
I walk past the home for the elderly around the corner
from where I now live. Me, this unanticipated adult.
With these unscheduled steps.
Sometimes I look up
at the little bubbles of convex windows, angled
to catch the last of the sunlight. Treated to rainbows.
The last we spoke I was fourteen
and you were alive and I was barely.
The last word you said to me was ‘anything’.
One of those windows heard anything you spoke last
of all. I smashed that mug on purpose, and I took the bits
to the ocean and I fed them to the sea. She swallowed them
without a sound – broken pieces
far too small to make a splash.
Decades in the dark change a thing.
This fragment of tidegift blue in my palm is heavy
and has no sharp edges at all.

You leave treasures
on your golden table,
swept crumb clean
by tiny waves.

When age takes away
the wave and sandy shore.
When sight dims and
eyes fill with rheum.

Then touch her treasures,
smell her salty airs,
remember the crash
and rattle of sea scree.

Draw each breath
and with it,
memories of sand winds
and young limbs.

Wistfulness marks you,
a desire for foam and dunes
where land gets up from the sea.

A bringing of comfort, this
distillation of mindfulness,
as a pause in your day.

In a dawn filled room
flax bed and polish, sense
curtains caught in sea breeze.
These billowing angels greet
you on this, your last day.

I long to be consistent through change,
On blue sky days,
Or in city stink claustrophobia.

a shard of delft cradled in seafoam
has survived four centuries of fortunes made and lost,
piracy, war, and brave exploration

perhaps its story is our story;
perhaps it is just a castaway—
why should we even wonder?

still, one thought remains,
unyielding to time and tide—
if this montage truly does not signify,
how is it that one fragment
tossed by wind and waves
can come to rest as
a splendid mountain range
across a lilliputian continent of spume?

They came on a moonless night
shedding black rain on us
our bodies
folded and melted
like some block cheese
drip, dripping over a plate
’till only the skeletons
greeted the rising sun

Phantoms in my Mind

Demon Alley – Each liquid dead of night nightmare
continues to deliver a blinding glare of my inner
light darkened by familiar fears snuffed out by
freezing whispers of false rumours of my former
self – My childhood nightmares and insecurities
clashing in a nightly showdown of my inner sanctum
my perceived existential survival, compounded
by recurrent mocking voices singing their cutting
questioning of my existence, my brave resistance –

I used to take their punches even their toxic
repetitive slashing remarks but I am better
now, so I willingly enter demon alley – Just
to make sure none of them is left to jeer and
sneer or chiselling my former brittle veneer.

Earth barren and bare
Our oceans chalk dry no
No surprise we just did not
Care so we still question our
Actions but we all know the truth –
Humanity complacent ignoring the signs
Mocking the science of those in the know
Dismissing rumours of the final day so here
We dwell in our new Atlantis no more the
Masters of our former existence, having
To journey far just to hope and find
Even just a drop of water – To
Touch our parched lips which cannot
Even speak our regret of our former
Proud existence – Now a mere
Ancient memory in our
New Atlantis…

of multi story car parks
that foam at the mouth
with the spit of the sea,
ogres and demons deep in the waves
wash the bairn of you clean,
scatter your old ash with their tides.

Multi story car parks are epics,
mountains to be read or heard.
with their twists and turns,
as you try to park your message
safe and secure in the company
of other folk’s narratives.

When sight dims and
eyes fill with rheum
in city stink claustrophobia
we dwell in our new Atlantis
no more the Masters
of our former existence
safe and secure in the company
of other folk’s narratives.
Decades in the dark change a thing.