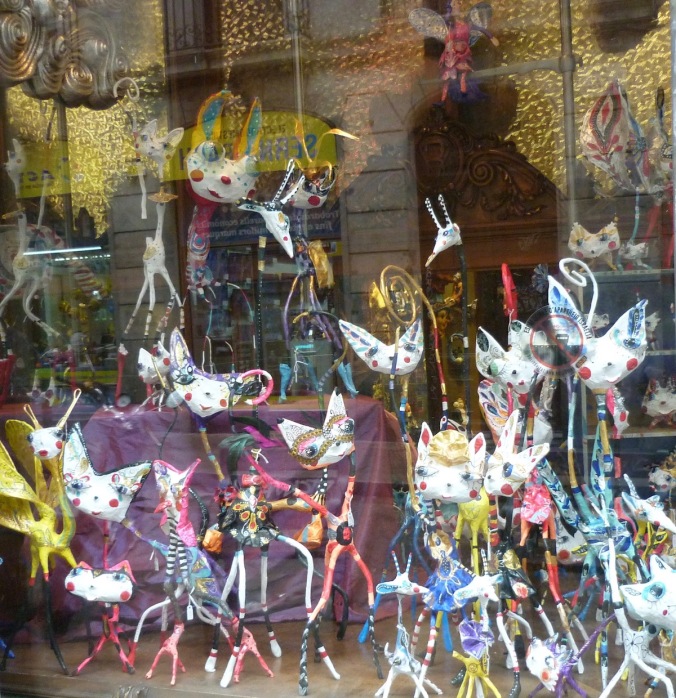 here on earth,
a fair trade toyshop window—
nothing to fear
and yet …

should I cut it straight and hard
in layers or leave it to grow?

you know
he cut my hair for years and we became good
friends . visited charleston together the
farm house not the jig
though the style would have suited
the era
so the
mouse

*
A shop window like Hunter S. Thompson, at eleven o’clock,
on a week day. A medium to large dose of LSD that I have
never tried. In Mark Fisher’s Ghosts, Burial never went to a
rave in the 90s, which informs, the apparition, the residue
of what’s left. People have a perverse interest in windows,
shop windows, specifically, glass operating as both a means
of access and exclusion. This is the Baudrillardian analysis.
*
Impressed
with the circulation
of the body
my entire outlook
becomes the deconstruction
of the human being
into a clockwork machine.
-Alex Mazey

Artists and scientists are
Little gods who make the
World make sense, make
Things fit together, or do not–
At their discretion.
Chaos and order,
Macro and micro,
Beauty and disgust,
Must meet, hold hands
Like humans used to
Before we were all
Forced off the canvass,
Becoming scattered pieces instead.

A present, payment for my board.
Fresh meat for the clumsy,
They that cannot hunt.
While I eat flies and wasps that sting.

Pain is fine its just a thing.
So busy grooming, hunting
and holding my lands.
I sleep where I want
and how I please.
I have no master.

Under sun, on soil
paper or wool,
its all the one to me.

And to those too big
to hunt and kill,
I spread my scent.
This meat is mine.

I once felt the touch of a solar flare kindling my
whole being as I absorbed its embracing aura, so
I kept it hugged it caressed it, if just to confirm I
am not really alone – You might look at me most
curiously even curse me with pursed ignorant lips
but allow me to gently kiss you and share my multi-
colored nature with you then maybe you can realise
who I really am but that is not meant to be as I am
not destined to be relevant in this reality – Not
even in your fantasy, so I roam this galaxy alone,

I came from nothing – Forever waiting…

Chorus of the Haters

Playground Show – Quick look have you seen what
she is wearing oh my – Wait, what? Never, no!
Surely not? Aw, hey look at that – You’re kidding me!
Is he really wearing trainers? Oh yeah, I heard his
mom had to sell his shoes so he could have something
to eat this morning, jeeze really now! Sorry what?
Who gave you permission to squeak? Let me go!
He asked for it. Let go of me!

Stranger Danger – Hey, you! Let go of his arm! Uh
who the hell are you? You what? Check this out
guys, I – What the… Ooh look at ow! I told you so!
Let’s get out of here. We’ll get her later, ok? You
gonna have your chance later. Why so gloomy?
I guess I’m okay but what do I say to my mom?
Just tell her the truth. Don’t worry, now hurry!
I cannot always save you. You can let go of my
hand now. Will I see you later? Got something to
say to you…

Backstreets of mind – I wish we could move again
but I felt something today. I hate it here though.
Those bastards never accept me. I need to be free,
To be me…This is not healthy for me. I am slipping
but I have finally connected to someone. A warrior
a friend – A saviour.

washes and cleans herself, anoints herself
brings them live prey, breathing for play.
Lives on cold pizza, crisps, rainwater.

Chooses who lives with her, whom she dances,
who wraps her fur around, curls up in a lawnmower
grass box, brings live gifts into her house as presents.