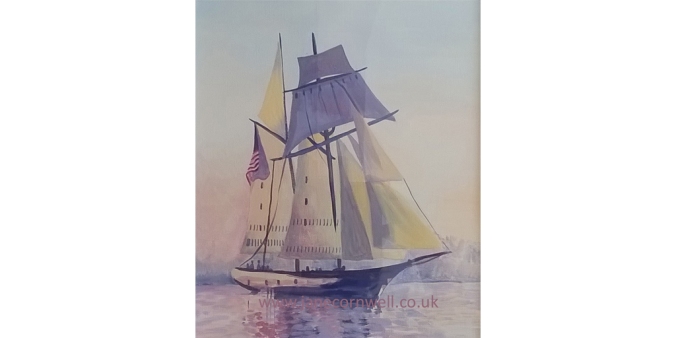 They were always barefoot,
the shoes they had were shared.
They went to church on Sundays,
to show the Duke they cared.

The father rose so early,
two haddocks on his plate.
Set against the time and tide,
‘til he met a watery fate.

They sailed out far to save a boat,
that struck upon the rocks;
floating fast above the foam,
where screaming seabirds flocked.

The turning tide was not their friend,
upon that fateful day;
the swirling currents sucked them down,
forever drowned to stay.

In gansys, mittens, oilskins,
lost deep within the waves,
with selkie sisters fathomed deep,
within a watery grave.

When the Sails Were Still Up

The American experiment
We learned about in school sailed straight
And true, with sails full of the winds of change.

The ocean was large, yet
Our nation was somehow larger.
With Manifest Destiny we claimed her.

But that was only the beginning of the journey.
The real claiming
Was in the taming Of our hearts,

To deserve her rich peoples
From all the world’s corners.
When we were her sailors,
We didn’t always steer right, but the sails were,

Indeed, still up.
We made corrections to our errors.
Now, sails down,
We watch helplessly

As she blows listlessly,
The victim of plutocratic pirates
Fighting over the helm, discussing her direction.

Whichever course is set,
presumes to dock her
at the same sad, destination.

Age is only a number

When the Captain looks in the glass
river he sees another father’s face.
Another father who wishes only to hold
his son again, to say he is sorry he cannot
save him from the water that empties
life out of his lungs at twelve years of age.
The Captain is Second Mate again on the clipper Cornwallis
homeward bound for Liverpool,
is ashore at Bounty’s Pitcairn with his Captain for provisions,
Sees his ship come close in , then too close in
wreck upon rocks so the island folk and crew
run to the shore to rescue what they can,
A twelve year old boy, an island son swims out
to save what he can against
relentless crash and work of waves smash
all wood to smithereens, drag him under
And over and under until the wrecked ship’s wood hits him hard
maelstrom buries him at sea, and his mam wails
and wails and father needs to throw himself
into the waves to find his child, as river Captain now
knows every bank and curve of this Fitzroy river that has taken
his twelve year old son and the Captain sobs
for that other father, for both sons,
for the broken ship is his heart.
-Paul Brookes

The sun falls like a talisman
pushing her sails toward the edges
of an autumn afternoon.
She is blind to what lurks beneath,
what may be waiting
on the watery path ahead,
but she glides onward,
tall and proud.
She never makes a sound.

I drift towards the foreign shore
and may not get the food to eat.
A place where hungry lions roar
and sands refuse to kiss my feet.
I will pluck the fruits from tree;
find waters to quench my thirst,
roam like a wanderer, remain free
create a house; survive cloudburst.

is an award winning, internationally published poet. She is the author of “Things My Mother Left Behind”, coming from Potter’s Grove Press in 2020, and also writes the blog, “Stories from the Edge of Blindness”. You can find her on Twitter @floweringink, listen to her on YouTube, and read more of her work on her website.

Here is my updated 2018 interview of her: https://thewombwellrainbow.com/2020/04/08/wombwell-rainbow-interviews-susan-richardson/

is a teacher, and writer with work published in a variety of places, from Poetry Ireland Review, Proletarian Poetry and The Interpreter’s House, to The Green Parent Magazine and The Guardian. She has a particular interest in the role of nature in literature, and is a champion of contemporary poetry in the secondary school classroom.

Here is my 2019 interview of her: https://thewombwellrainbow.com/2019/12/28/wombwell-rainbow-interviews-ali-jones/

is a Software Engineer by qualification, an accountant by profession, a budding Guitarist & a Yoga Sadhak at heart and a poet by his soul. Poetry intrigues him because it’s an art in which a simple yet profound skill of placing words next to each other can create something so touching and literally sweep him of the floor. He is 32-year-old Indian and stays in Mumbai. His works have appeared in the following places:
An ebook named “Pav-bhaji @ Achija” available in the Kindle format at Amazon.in The poem “Salsa; a self discovery” published in an anthology motivated by Late Sir APJ Abdul Kalam. The poem “High Caloried love” selected for an upcoming book “Once upon a meal” The poem “Strawberry Lip Balm” selected in the anthology “Talking to the poets” Four poems published in a bilingual anthology “Persian Sugar in English Tea” Vol.1 Two poems published in the anthology “Poets on the Run” compiled by RC James.

His poems have made it to the PoeTree blog and front pages of PoetryCircle.com & OpenArtsForum.com. In free time, he likes to walk for long distances.

Here is my 2018 interview with him: https://thewombwellrainbow.com/2018/09/23/wombwell-rainbow-interviews-jay-Gandhi/