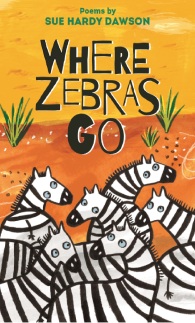 is a poet & illustrator. Her debut collection, ‘Where Zebras Go’, was shortlisted for the 2018 CLiPPA prize. Sue’s poems and teaching resources can be found on the CLPE website. Her second, ‘Apes to Zebras’ co-written with poetry ambassadors, Roger Stevens and Liz Brownlee won the North Somerset Teachers Book Awards. Sue has a First Class Honours Degree. Sue loves to visit schools and he has worked with the Prince of Wales Foundation, ‘Children and the Arts. As a dyslexic poet, she loves encouraging reluctant readers and writers.  Her new solo collection, If I Were Other Than Myself is due out with Troika, February 2020.
Look for her on Twitter @SueHardyDawson,
Facebook, Poet Sue Hardy-Dawson https://www.facebook.com/poetsinschools
clpe.org.uk/poetryline/poets/hardy-dawson-sue
Book her with Authors Abroad https://www.authorsabroad.com/search-authors/sue-hardy-dawson

1. What and who inspired you to write poetry?

When I was a small girl my father used to march around the bedroom reciting poetry. He grew up during the infancy of accessible radio and most people had, a party piece back then. He actually had a rather wonderful singing voice as well, but he had a way of sort of acting out the poems. He was a great fan of AA Milne and would do The Kings Breakfast and The Dormouse and the Doctor. He knew by heart great long stretches of Hiawatha and the rhythms and repetition, exquisitely crafted language I loved. He would do The Highway Man, The Green Eye Of The Yellow God, Night Mail and the now somewhat none PC Cargoes with its cargo of ivory. However I loved to listen to his voice and his enthusiasm was infectious. Of course I didn’t understand all of the words but I was mesmerised by them. I wrote a kind of tribute to Auden’s Night Mail, you can find it in Where Zebras Go.

Like myself my father was dyslexic, though I didn’t know until after I was diagnosed aged 16. He was an extremely well read man but deeply embarrassed by what he couldn’t do. I didn’t particularly enjoy school either, though like my dad an avid reader, I struggled to spell legibly and had terrible handwriting. Dyslexia was largely unheard of and little understood then. I enjoyed art though and had a vivid imagination. When I was about 8 faced with the dreaded task of writing holiday postcards I wrote a little poem. It seemed to please everyone and was something I seemed to be quite good at. When my Nana died many years later, she still had that poem in her bedside drawer.

But in the meanwhile I became disillusioned, fearful even of writing, the sheer effort of it and when I left school I didn’t write for many years. Then fate intervened I had children and I started writing poems and stories just for them. Next one of them was diagnosed with dyslexia and dyspraxia and kicked off big style, they didn’t want to be stupid like me. Computers were in fact my saviours, when I first saw one it had to be filled with binary codes, not very dyslexia friendly, but suddenly I was helping a reception class and four-year-olds were using them. I learned and went on to do a degree and yes began to send poems out.  I went to a library event and Nick Toczek put two of my poems into a Macmillan Collection, Toothpaste Trouble, 2002, my first step. It would be 14 years before I got my first collection accepted. Poetry lists for children died and came back again during that time and it was essentially an apprenticeship. Yet I don’t regret it, I think my poems grew as did my family. It was the right time for me.

2. How aware were you of the dominating presence of older poets?

When I was 14 in an English lesson I first discovered Ted Hughes, his poems were quite different to the ballad style poems my dad recited. I was struck particularly by ‘The Thought Fox’, it was as if he saw into my head. The best poetry, however simple or complex reaches out to a common experience and shows it in a different way. I think then was the first time I had actually thought about poets being people who wrote, that I might write poems. It changed my view of what a poem was and I felt I need to read as much of it as I could, to experience its constantly evolving form. From Hughes and those before him right back to 16 century and forward to the Mersey Sound, Kay, Duffy and too many to mention I absorbed them.

Many years and two collections later, I found to my delight that I was in an anthology called A Poem For Every Night of the Year,  with Ted Hughes’s Thought Fox, still one of the most exciting things I have ever achieved.

Here also I owe a great debt older wiser poets, children’s poets, well at least those I have had the pleasure of knowing, are wonderfully kind and generous people. I have had lots of support and encouragement. I met Roger Stevens some years back and through him, Liz Brownlee, Gerard and Cathy Benson, Rachel Rooney, Jan Dean, Michaela Morgan and many, many other wonderful poets. I feel so very lucky and at first was more than a bit star-struck, poets whom I had read for years, I felt like a child at a grownups’ party. But though we span the country the internet means we can stay in touch, because writing is essentially a lonely business.

On a writing day I like the first few quiet hours, I will take those thoughts once formed out for a dog walk, do admin on my return. Then late at night when the house quietens again I will work on until I feel my brain is too sleepy. I find that things become clearer if you put them away for a few days. So I’m always on with multiple things. If I get a block I read through old notebooks until something comes. A deadline has a great capacity to focus the mind. Essentiality, though, a good idea can arrive at any time, so I have paper pens, phone, notebook, Dictaphone always. I have a bad memory so if I lose the first line it’s lost forever. But if I scribble that even on my hand the rest will return.

Everything and anything, I need to write or I feel quite lost, even if it’s not working out as I’d hoped I need to try every day. Sometimes though the best days something flies into your head and you just feel it has wings, it might obsess you for days and that for me is the best feeling, the constant surprise of not knowing quite where you are going but that it is worth the search.

I write something every day, even if I don’t think it’s good, because without words on the page you have nothing to craft to work on. Sometimes a line is just shorthand for where you are going so it’s a case of don’t think too hard about good or bad just write. I will spend days, weeks or even occasionally years crafting and changing bits, for me that is the joy, the shaping and smoothing.

I think immensely, first you must know what has been before so you don’t write it again, or at least provide a new way of looking at it. I think whatever you write you must read because there is no substitute for reading if you are a writer. I read once for pleasure and closer to see why it is wonderful or in some cases terrible. I unpick why and that informs my writing process. Not that I think about any of this when I’m actually writing. Writing is a bit like diving into a pool, you can control the way you leave the ground, but how you land and the bit in the middle is free falling.

I have very diverse tastes in writing, for poetry, apart from all of the above I love, Pie Corbett, Philip Gross, John Foster, Joseph Coelho, Roger McGough and not exclusively Billy Collins. Literature, David Almond, Andrea Levy, Lucy Waters I could go on for pages.

Why I like writing that transports me, I love poetic prose, essentially if I read something and aspire not to recreate it but to write as well then I love it with a passion.

Well, because I can’t stop, in a way. I do have other things that I do but nothing that fulfils me in quite the same way. I also paint and illustrate though so I have times when those things take over, but even so I have to stop every couple of days just to write something or it gnaws at me and I can’t concentrate.

I would say that we are all writers, but write what is inside yourself. Read as much as you can and not just what you think you like, writing that is bad can tell you as much about process as good writing. Write something every day even when you feel like you don’t have anything to say. Read what you write to others, draft and redraft, keep going. Write for the pleasure it gives you and because you can’t help it. If it gives you no pleasure you probably should do something else. Being a writer is a tough life because inevitably you need a thick skin. I thought when I got my first book out how wonderful, then a second later what if no one likes it? It’s not easy but if you try and keep going it’s possible even for someone like me who finds manual writing difficult.

Well some things are still top secret, however, I have a new book due out February 2020 with Troika Books, ‘If I were Other Than Myself’, I have done all of the illustrations and I am very excited about it.