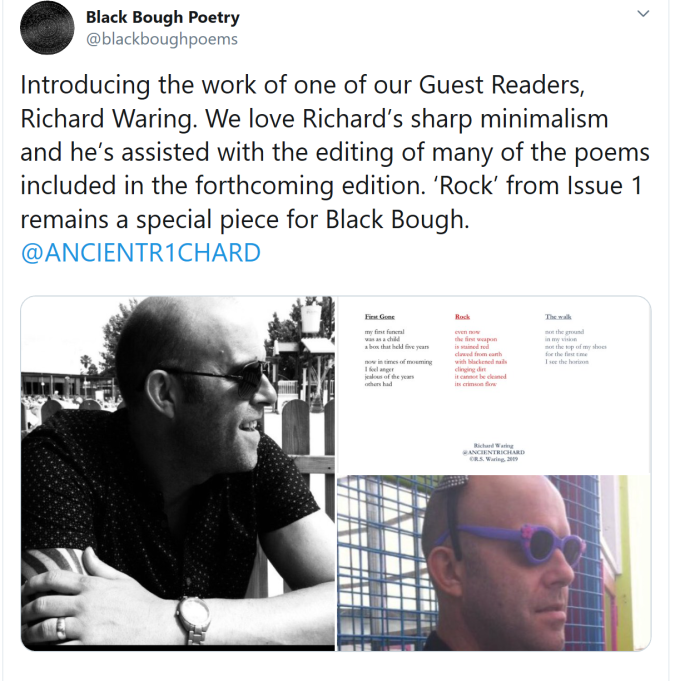 has lived in Belfast all his life. He loves his city and like many who live there shows that love by constantly complaining about it. His first poem ‘To Lie On White On Green’ is
published in the 2019 CAP anthology Find.

Apart from the occasional poem for my wife until the summer of last year I hadn’t written any poetry since leaving school. I had been trying to write a short story about a piece of work a teacher had rejected and it didn’t work, a mess of words on a piece of paper. when I stopped trying to force the story something happened and I wrote The Monkey pt2 which has since been published in PoetryNIs

It definitely wasn’t in school. School was the place where any love I might have had for poetry died or at least took a fatal blow. Presented in a “this is something we have to do so let’s get it over and done with” manner and made all too clear that it wasn’t something that I would be able to understand let alone create.

I was a big Metal Head in my teenage years , still am although a bald head and creaking joints makes my headbanging a little less impressive. Iron Maidens song Rime of the Ancient Mariner preformed some much needed life support on the joy of poetry. It didn’t spark a newfound love or start a lifelong journey searching out great poetry old and new but listening to that song and reading the poem that it’s based on had, over the years, kept a little spark of hope burning inside. I just didn’t know it.

Last year I joined the Belfast Writers Group in an attempt to get over my social anxiety and to finish work on the novel I had always told myself, and anyone who would listen long enough, I would write. When I brought along some of the poems I had begun working on and shared them with the group they encouraged me to continue.
I have found social media to be a great place for poetry. I discovered the writers group on Facebook and over on Twitter after responding to a submission call for a new online journal I discovered my poetic home. I am so glad I found the great people of the Black Bough Poetry community, interacting with so many fantastic poets from around the world all with their own style, voice and love has helped that little spark, that Iron Maiden kept glowing, burst into flames.

The “flames” have shone a light on a whole new world of creativity and entertainment for me. It’s been like rediscovering music, all these great artists, new and old, and I get to read them all for the first time. it’s a little overwhelming at times but it feels good to be lost sometimes.

Creativity wise it’s given me a second life. I have always loved writing but sometimes days, weeks, months and if I’m honest even years could pass before I would write a single word, now rarely a day passes when I don’t scribble down a little word doddle at the very least.

I don’t have a proper routine I just try to make sure that as soon as something strikes me I jot it down as quickly as possible. a few lines even a couple of words can feel so right in the moment but if I forget to capture them they’ll be gone forever.
I don’t currently have a laptop and I’ve a nasty habit of losing notebooks so all my writing is done on my phone at the moment which is very handy when random ideas strike.

My phone is always with me, I’m always playing games, reading books, watching Netflix and scrolling through social media. so it’s become a habit to occasionally look over my poetry files during the day, stretching them, editing them, polishing them and ending up with dozens of folders full of bits of poetry all called “New Folder”.

4. What motivates your writing?

The first poem I can remember writing was about the death of my younger brother Kenneth when I was nine years old. he had only just turned six and although he left his mark in the lives of his family he died too young to make much of a mark in the world. I wanted to write something that would honour his memory, make a mark for him and let the world know that this beautiful soul existed.
It’s been more than thirty years since he died, the poetry I have written in the past year has helped me come to terms with his loss more than I ever thought possible.

4.1. How does writing poetry help you cope with grief?

It allows you to face it honestly without filters. Because if you want to try to craft a few words of beauty you need to look at the whole truth not just the darkness of loss but the reason the loss was hard all the good things that are now gone can be remembered and bring joy. I can now take pleasure in the memories of before.

5. How does your early experiences of reading and writing poetry influence the writing you do now?

During my GSCEs my English teacher refused to accept a piece of work(The Monkey). I was told that it couldn’t have been my work, that I must have copied it from somewhere because someone like me couldn’t write something like that. it broke my heart and I turned my back on poetry. Didn’t read it, didn’t write it, didn’t think about it.
Now when I write I sometimes get the feeling that this is something I shouldn’t be doing, that I don’t deserve it, that I’m not allowed. Part of that is guilt on my part for cutting something so beautiful out of my life for so long but part of it is that first rejection. That feeling isn’t quite as strong as when I first started/restarted writing poetry and I think part of that is that if even one person enjoys something I’ve written, if my words reach them in some way it feels like a big “Fuck You” to those early experiences.

6. Who of today’s writers do you admire, and why?

There are quite a few poets I follow on Twitter who I really look forward to showing up on my feed. Ankh Spice work is always so uplifting and shows a real love and care for the world we live in. When Upfromsumdirt shows up I can’t wait to read what he’s written humorous, thoughtful, passionate his poetry and non-poetic posts are always a highlight of my day. Kyla Houbolt is another writer I’m so glad I followed and I’m always scanning my feed for some new piece of work. I could list dozens of names, I just love to see the work of people who write with passion and the internet is a great place to find them.

7. What would you say to someone who asked you “How do you become a writer?”

Don’t worry about spelling, don’t worry about grammar or punctuation, don’t worry about style or form. All that comes later. If there are words within you, a story to tell a thought to share, put them down in honesty.
once they are written down that’s when you use the tools you have, or are still developing, to shape and polish it. the most important thing is capturing the thought no matter how raw and unformed it is when it first appears.
And never allow yourself to feel guilty for not reading enough. Read as much as you want but don’t allow it to become a chore or obligation. those words were written for you to find and enjoy and want to read not have to read.

8. Tell me about writing projects you’re involved in at the moment.

At the moment I’m trying to edit a collection of my poetry down into a manageable chapbook. I kept adding more and more to it and it’s grown into a bit of a monster so I’m going to need to give it a serious pruning.
I’ll also be working on the finishing touches of a poem telling the story of Cúchulainn which I started about seven months ago. I haven’t looked at in for a few months so hopefully I’ll be able to work on it with fresh eyes, sometimes in the rush of new writing you blind yourself to the flaws you are making.
Finally I’m also working on a second novel. I know what I’d like to happen in it and can’t wait to see if it works out the way I’ve planned, when I start writing the characters take control of their own lives.