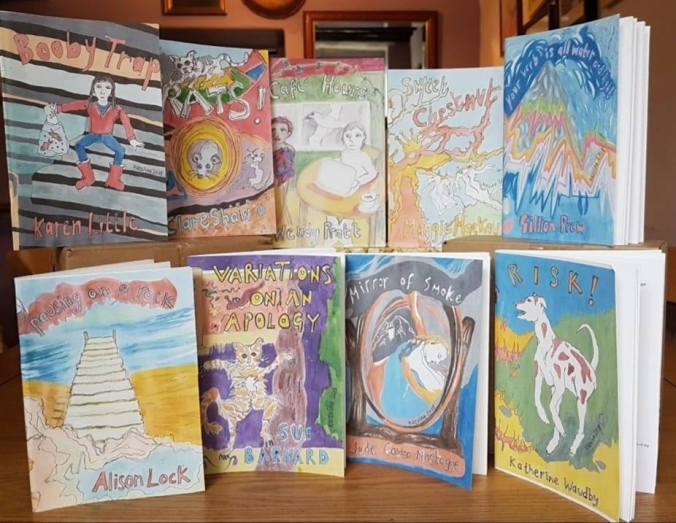 I trained as a dancer at London Contemporary Dance School, and as a Fine Artist at Camberwell School of Art, London, performing and exhibiting internationally.
My poetry has been widely published in magazines and anthologies, and Tentacles contains ten of my illustrated poems. My first novella Filled with Ghosts was published in December 2015 and shortlisted for the novella Saboteur Award in 2016.
‘Karen Little writes characters with a surface oddness. Whether they are floridly psychotic or merely displaying a level of everyday delusions and compulsions of creativity; they are all unusual and unique. As the book goes on it becomes easier to absorb the deeper psychological movements that the characters have as well as these qualities. However, the opening of the book is quite impenetrable. We hear from Diana, who, in her own words, builds ‘sentences from [her] own spit’. Yet, as when reading someone like Elizabeth Smart, battling through this series of barely linked, intense images is worth it. Once the rhythm that runs through the piece is detected, it becomes easier to grasp what previously appeared to be chaos. The rewards are images such as this one: ‘I catch rainwater in a pan, pour it into my fish tank, filling it with freedom and light’. (extract from Sabotage Review, Sarah Gonnet)
The sequel Ghost Train Leaving was released in June 2017, and the final book in the trilogy (the Spanish Spectres series) Ghosts Treading Water in October 2017.

The first poem I remember writing was about age ten when I won a competition for a poem about a horse. I was actually scared of horses because one bit my mum and another stomped on my foot, but I loved the idea of them. I only remember the last line of the poem HE HAS WON!….probably the first and last time I used capital letters, an exclamation mark….or wrote about winners in a poem. Not the last time I wrote about things that scared me though.

The three subjects at school that interested me were English Literature, Art and Classical Studies. I veered towards art out of the three because I didn’t get told off in art, didn’t get told to sit up and pay attention. I was listening in English Literature, absorbing stuff, getting top marks. But I couldn’t sit up or agree with everything we were told. So I wouldn’t write things down. I got in a lot of trouble in that class, because the teacher was very sincere and I was a brat. Then I ran away from home to London, got into London Contemporary Dance School, did Fine Art at Camberwell College of Art. I have performed as a dancer  and exhibited as an artist internationally. I didn’t start ‘writing poetry’ until after six years living in Spain I got dragged back during a long period of psychosis. Left everything behind, had no art materials or space or anything. So I started writing things down instead of dancing or arting them. I am a bit vague about quite how it happened, but I started at Jackie Hagan’s Survivor’s workshop, then with John G Hall. It was about going to events and reading. I hand wrote stuff, read it. Had a good time.

I am aware that I was once introduced to ‘old poets’ but I have no idea which poets old or new I might have subconsciously absorbed. I don’t and never have felt competitive, nor do I compare myself to other people. I enjoy dancing more than watching dance, making art more than looking at art, writing more than reading, I don’t think anyone’s writing has ever made me feel better about life or my place in it. Music has. I don’t know anyone else living in a trailer with anything like my background. So I always doubt the things I write will affect anyone. Hence I question, not why I write (it’s because I never get over things, and I try to explain things to myself) ….but why I put it out there. And yet I do……

I don’t have a routine. I always do something, but it’s varied. I feel like I have several brains that kick in at different times. I should be organising my poems for a collection. But my organising brain is absent. I recently completed a project producing 8 poetry pamphlets for 8 different poets. I made the covers, formatted, suggested, printed, sliced stapled and posted. Made a decent sum of money for two animal shelters. I was so organised and motivated. Perfect project for me. I got to read poets whose work I like/ I like them/they like animals. I got to carry the whole thing through in a few weeks. Then there are days I write a poem or more a day. Days I submit poems to places. I have about a hundred poems published , but at this point can’t imagine having the right state of mind to submit ever again. So ….routine…..probably isn’t the word…

5. How does writing help you“ get over things, and… explain things to” yourself?

Writing doesn’t help me get over things. Nor does art…nor did dance. So I keep doing them. It does explain things to myself, because I tend to blurt things out…..IRL and on the page…..and then I start to understand something. For instance, I have a novella trilogy published. The first one Filled with Ghosts was shortlisted for a Saboteur award in 2016. It is fairly autobiographical, though split between a number of characters. It is about psychosis, about what is the difference if any between ‘real’ and ‘unreal’ When you have very traumatic experiences I don’t think you do get over them. But I think it’s important to understand them, how they effect you. how you might take that into your future self. Otherwise you take it out on other people, who don’t deserve it.

What is young? At school I never finished a book, I just wrote my own thing in the exams. You can get away with a lot of subjectivity and invention in English Literature. I got A’s even though I had only read a bit of Jane Eyre. In History I would get ‘don’t invent history’ across my tests (which is laughable considering how history is invented and who writes it)….I didn’t start getting into books until I stopped going out into the world and getting into as many things as I possibly could.I have read a lot of books in middle age….

I admire writers who are writing out of necessity, to keep sane or to find purpose in existence. If the desire is strong enough to face the organisation needed for getting published, or getting to readings, I admire them if they managed that, particularly if they haven’t got a support network, family, friends, partner. So I can’t give you names. I probably stumbled upon them at a reading in a bar, or in an online magazine….or I will, maybe.

8. What would you say to who asked you “How do you become a writer?”