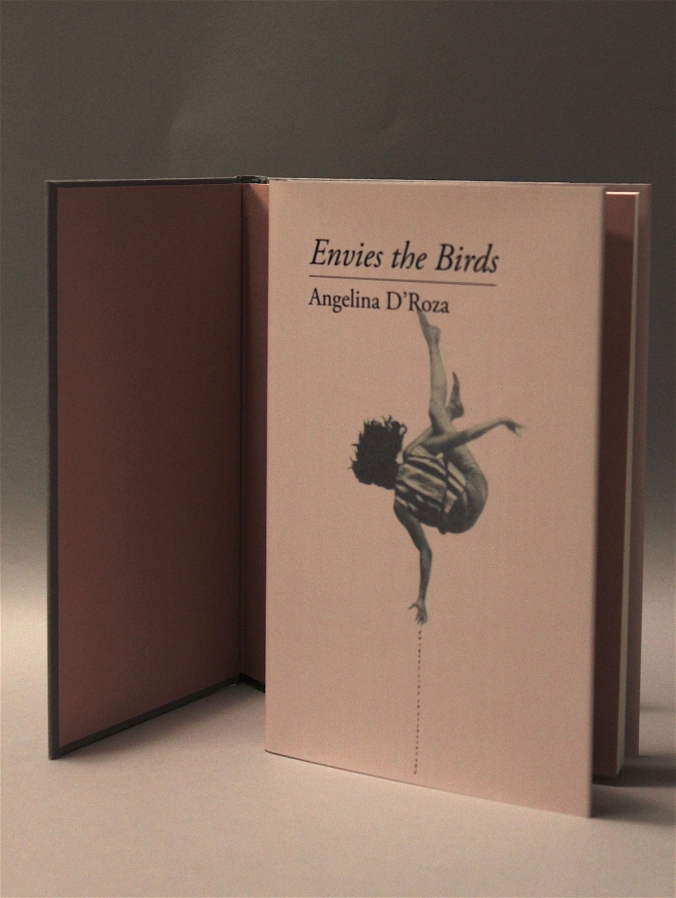 Angelina lives in Sheffield.  Her first collection, Envies the Birds, was published in 2016 by Longbarrow Press.

I saw a Margaret Atwood quote that may or may not be real, but it went something like … most people write when they are children, so the real question is why do they stop …  I know why I stopped, at least I have a list of likely contributing factors.  They are mundane.  Predictable.

For me the question is why did I start again.  It was 2005.  I was 29.  I’d worked in healthcare since I was 16, had a nursing degree, a good position.  And I left.  I’d decided to do the MA Writing at SHU, except I had no good reason to give them for letting me in, no writing portfolio, no clue, nothing.  So I applied for the Film and Literature degree, with no expectation of getting on.

The reasons I give for why I made these decisions vary according to who’s asking.  None untrue.  But what we think of as driving our choices, are to some extent, the stories we tell to make sense of them.  No one story fully explains why I gave up the career and security I’d worked so hard for, with no evidence to suggest it would work out fine.  But it did.

The first poems I heard were prayers, but I don’t remember being introduced beyond that.  Perhaps I was.  There would have been this and that at school, but I don’t have any strong sense that poetry was part of the same world I grew up in.  I think I introduced myself.

3. How aware were you of the dominant influence of older poets, traditional and contemporary?

“The lyric subject, the lyric ‘I’, was largely invisible to me until I crossed a border.  To put it more accurately, it became noticeable only when I returned to England, where I was born, and into the sovereignty of its dominant poetic mode”.
(Sandeep Parmar)

I feel like this question has an answer embedded, which makes me wonder what we mean by dominant and what we mean by awareness.  And how both these concepts might shift depending on where you’re standing.

As someone with only very little knowledge trying to introduce myself, 20 years ago, every book I picked up felt like a drop in some uncrossable sea.  I didn’t know what I was doing, what I was looking at.  At least dead poets gave the impression of holding still, while I asked myself that most basic question of whether I liked the poem.  Coleridge, Hopkins and Dickinson were my beginning.  I liked the poems.

Is it older poets that dominate, or specific older poets, specific voices, values, aesthetics?  Is it a familiar (imagined, nostalgic, constructed, aspirational?) version of ourselves (some selves) being reflected back to us, a potential sense of shared culture, of lineage, a reading foundation we might have in common as readers, and later, converse with as writers?  Reframed, revised, the same processes of exclusion and amendment going on and on.  It can make the shelves navigable.  But how aware can you be that something is dominant, if you don’t know much else?  It’s a process, an activity, a becoming aware that accrues each time you glimpse the aw(e)ful and wondrous abyss of all that remains unknown to you.  When you catch sight of your own conditioning.

In Sandeep Parmar’s essay, “Lyric violence, the nomadic subject and the fourth space”, she describes the British lyric “I” as speaking “from within a kind of integrated knowingness and belonging”  That is, “its inherent premise of universality, its coded whiteness”.  She talks about “the literary gatekeepers of shared assumptions [and] the ways that assumptions about individual voices are read within national idealisations of the state and its culture”.  What dominates in the UK?  Do we know?  Is it older poets, is it white European, heteronormative, male?  Are we inside it, addressed by it, and so, unseeing of it?  The more questions I ask, the more questions I have.

4. What is your writing routine?

I’m not better in a morning or better at night.  I don’t write every day.   I haven’t done morning pages for years.  When I’m writing, really writing, it’s intense and it feels like it will go on forever.  When I’m not writing, it feels like I never will again.  I’ve learnt to go with it, to listen to my rhythms, to pay attention to when it’s time to stop, because if I keep going I’m going to be writing the same poem over and over.  And when to clear the day of everything else because it’s time to start again.

I just finished writing a poetry pamphlet.  I thought it was finished in spring.  In the summer, I started a new writing project, a collaboration with an artist, and found the poems belonged to the pamphlet.  They had a different undercurrent to what had gone before, but they lifted that earlier work, completed it.  And I came to them because of the break.  That time to take things in from all sides.  To be affected, altered even.  But I don’t like to stop.  I miss it.  It’s my safe place, the one place I am certain of.  It rescues me.  Not painless, not at all, but mine to feel in, to work things out in, to trust.

Most often, I write in bed.  Half the bed is always covered in books, biscuits, a guitar.  So, there’s no reason to move.  I’ll have made a cup of tea to go cold beside me.  I have a notebook full of recipes and shopping lists and work-related maths and poems I’m working out.  But I don’t start poems on paper because it will take me a lot of trying to begin, a lot of testing a word, a phrase, a line, before something catches.  I can’t do that on paper.  I censor myself on paper, though I like to see notes of other people’s crossings out.  I think it’s beautiful.  Later, when something is taking a shape on my laptop, I might hand-write it out, try to summon up what I have and see what falls away in the remembering, see what that might mean or where it might go next.  I forget to eat, am late for everything, sleep little.  I don’t clean my house or brush my hair.  I write.

The impetus to write comes from reading, though it would be difficult to say why a certain line catches me that way.  It is something to do with the language and turn of it, as much as what is being said.  Obvious, I know, but still somehow, hard to pin down.  Perhaps because that line might have nothing to stick to, but leave a trace that waits for the right time and some unrelated image or story or emotion to collide with.  It’s always a surprise to me, where it begins and where it goes.

I’m reading Anne Carson’s “The Glass Essay”, where the speaker goes to visit her mother after a break-up.  Her mother lives alone on a moor, and her main fear whenever she visits, is that she is turning into Emily Brontë:

my lonely life around me like a moor,
my ungainly body stumping over the mud flats with a look of transformation
that dies when I come in the kitchen door.
What meat is it, Emily, we need?

The poem talks about Emily, at times, as though she’s in the room, an explicit exploration of the ways some writers sit with us in our attempts towards expression or sense-making.  Perhaps writers I’ve read help to define the range of potential sense intelligible to me.  To read widely, then, is to increase this possibility.  Nothing is fixed.

8. Who of today’s writers do you admire most and why?

To work something out.

“Please give me some good advice in your next letter.  I promise not to follow it” … (Edna St Vincent Millay).  The advice that I’ve most often seen going round is to write and to read, and those are the two activities that make me a writer.  But I don’t know how useful that is as advice.  I think people will read and write what interests and excites them as they find it.  The thing is how to find it.  What I’d be interested in suggesting is the value of a community, that if they can find or build a community of other writers, they’ll be fine.

Dostoyevsky Wannabe are an independent press and they have a “Cities” series of books.  I’m writing a sort of essay-epistolary-poem for the Sheffield edition, which will be launched in March 2019.  It’s got an amazing line-up with Emma Bolland editing, so I’m looking forward to that.  (https://www.dostoyevskywannabe.com/dw_cities_sheffield/Cities)

Also, the pamphlet I mentioned is called “Correspondences”, and is a series of poems reflecting on aspects of home and distance and displacement, a sort of writing into the space created by working in the Middle East.  It will be published by Longbarrow Press next year.  Longbarrow are another independent press and it’s their care and craft and ethics that makes them quite special.  Genuinely valuable.  They don’t get funding.  They don’t make a profit.  They just make lovely, thoughtful things.  Small presses are vital, to resist, augment, diversify from, the mainstream, so I think it’s important to engage with them, support them, buy from them …  (https://longbarrowpress.com)