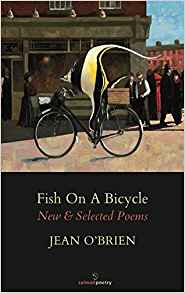 Jean O’Brien’s fifth poetry collection, New & Selected, Fish on a Bicycle was published by Salmon Publishing (2016). and has recently been reprinted. Her work is widely anthologised, most recently in The Lea Green Down, Ed. Eileen Casey. Eavan Boland: Inside History (Eds. Campbell and O’Mahony), Reading the Future, Ed. Alan Hayes. The Enchanting Verses (Irish Ed. Patrick Cotter), The Windharp, (Ed Niall MacMonagle), If You Ever Go, One City One Book (Eds. Boran and Smyth). She was featured writer for New Hibernia Review (USA).
Festival include: The Gerald Manley Hopkins, The Goldsmith, An Cuirt, Armagh Literary Festival, Dublin Book Festival, Five Lamps (2012), Leaves, (2015 and 2017) Dromineer (2013). In conjunction with the Polish Embassy she took part in the tribute readings for Nobel Laureate Wislawa Szymborska. This year she read at the Cork International Poetry Festival.
She works as a poet and tutor in prisons, schools, travellers centres, libraries and various County Councils. She tutors in the Irish Writers Centre in person and on-line with a USA university on their MFA programme.
Awards include:
She was a 2017/18 recipient of the Patrick and Katherine Kavanagh Fellowship. She was the winner of The Arvon International Award (2010) The Fish International Award (2008) She was highly commended in the Forward Prize and was awarded two residencies at the Tyrone Guthrie Centre and more recently at the Tin Jug Studios in Birr. She has just been shortlisted for the UCD competition ‘Voices of War’.
http://www.jeanobrien.ie

Q. 1 What inspired you to write poetry?

I was originally moved to write poetry, like I suppose a lot of teenagers are, to explain the world to myself. You know that mournful adolescent phrase most of us go through where we are our own whole world. I had lost my mother to suicide the summer I turned fifteen, and my beloved grandmother a few months previously, and so had something to be mournful about.

Q. 2 Who introduced you to poetry?

Funnily enough my mother. She had a copy from her own schooldays of Palgrave’s Golden Treasury which I used to read a lot. In school I also liked poetry and liked learning it off by heart, which is frowned upon now, but I still remember snatches of poems I learned over 40 years ago and cannot remember any of my own writing. I wish I had had more drummed into me in the ‘sponge’ years.

Q. 3 How aware were you of the dominating presence of older poets?

Initially barely in the ‘home scene’, obviously I was very aware of the poets in Palgraves who were the likes of Keats, Wordsworth, Shelly, Byron etc. The Sylvian poets as Eavan Boland called them. Of living Irish poets I was barely aware, but loved Kavanagh and Yeats.
As I started publishing I became very aware of them and of the idea of having to do an apprenticeship before you could even dream of joining their ranks. Unfortunately the world changed and now it seems to be all the New Kids on the Block who get the attention and other than a handful such as Boland, Muldoon, Meehan, Longley McGuckian etc. the rest of us I think feel a little short changed, by the moving of the goalposts.

Q. 4 What is your daily writing routine?

Not good! I write in my living space, so it is hard to stop myself just ‘hanging out the wash’, ‘cleaning the draining board’. This of course is death to inspiration. Most writers also work at tutoring/reviewing/readings etc for a living, so the awaiting ‘work’ emails can take up a lot of time and things such as this questionnaire. When I have the bones of a poem down, I relax as I know it is there to go back to. Going to writing retreats really helps you to knuckle down and actually write.

Q. 5 What motivates you to write?
Feeling I have something I want to say, sometimes as much to myself as anyone else, but I suppose I have chosen a public platform to share my thoughts in. Occasionally if I write what could be regarded as a ‘public’ poem and I get good feed back from people, people do write and send cards etc. it is a great feeling to feel you have connected with someone and made even a tiny difference, if only for a short while. I have poems by others that I turn to for comfort and value them.

Q. 6 What is your work ethic?
I refer you to question 4 above! Not as strong as it should/could be, unfortunately I have a very strong work ethic to housework, which I know is silly, but I like things calm around me. I certainly go about the business of poetry every day and usually read other people work every day. Writing needs a lot of daydreaming time, which is often hard to achieve, going out for a walk helps.

Q. 7 How do the writers you read when you were young influence you today?

I read, as I have previously mentioned, a lot of Palgrave’s and loved the mournful poems of Byron, loved too Robert Frost, who is a terrific poet for younger poets to read, as he is a master of form and has much more going on that first appears. Who could fail to be moved by Tennyson’s Crossing the Bar or Coleridge’s rousing Kubla Khan? I certainly took away a sense of rhythm, rhyme and pacing from them, whether or not I still apply them today is a moot point.

Q. 8 Who of today’s writers do you admire the most and why?

Oh I have a few. I just love Paul Muldoon’s sparkle and flare, his amazing use of language and his wily wit . Mary O’Donnell’s honest and subversive work, Paula Meehan’s powerful use of mythology mixed with social concerns. Eavan Boland for leading the way. That’s just in Ireland, in the UK I love people like Carol Ann Duffy for her wit and tender use of words, Simon Armitage for his socially concerned well worked words and Gillian Allnut for her surreal and mysterious poems. In America people like Ocean Vong, Joie Graham and Billy Collins. I could go on all day. something in their work sparks and excites me.

I have some deep need too, I get fairly antsy if I haven’t been able to write for a while, it is a sort of hum in the back of my head that needs to be attended to.

Q.2 What would you say to someone who asked you “How do you become a writer?”

I would say read, read, read, and then write, write, write. It is a muscle that will grow is exercised. But you must read widely and deeply this will help you improve your word-hoard. You cannot hope to play in the orchestra until you have heard the orchestra play. Join a workshop or writing group, get used to critiquing your own and other peoples work. When you have polished a piece and put it away for a week or two then look at it again and send it out, accept rejection and keep sending out.

Q. 1 Tell me about the writing projects you have on at the moment.

I am involved in something that I am not at liberty to say yet, My last collection my New & Selected Fish on a Bicycle has just been reprinted by Salmon and I tutor in prisons and colleges which keeps me fairly busy and I am always at the project of finding time for my own writing.