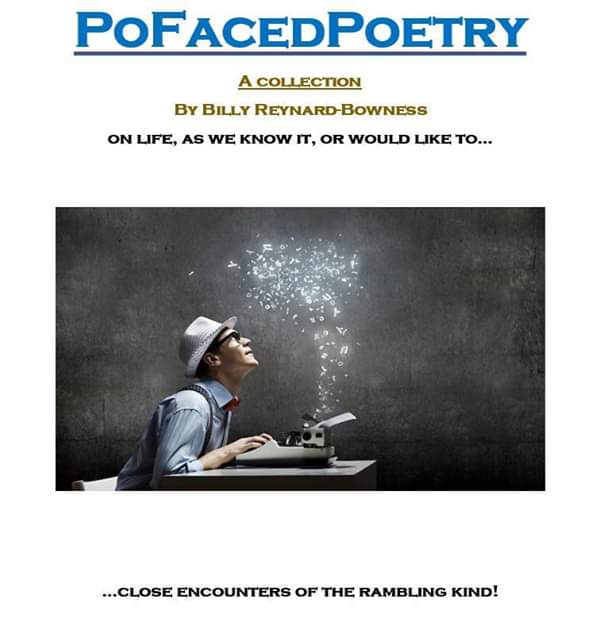 Born in Lincolnshire but growing up and educated in Huddersfield, Billy considers himself a Yorkshireman at heart.
Billy is 47 years old, a Pisces, former Legal Executive, now mad scientist and sometime bit part actor. He lives in the wilds of deepest North Yorkshire with his partner, three dogs, ducks and countless chickens.
In any spare time, Billy enjoys walking in the Yorkshire Dales, travelling, gardening and boating.

“Humour and humility will see you through”
FB: https://www.facebook.com/PoFacedPoetry
BLOG: https://pofacedpoetry.wordpress.com/

1. When and why did you start to write poetry?

I wrote some poetry when I was in high school after reading and memorizing a poem off the blackboard called “The Scarecrow” by Walter De La Mere! It really impacted on me and stuck with me. However, life and work took over and I didn’t write again seriously until this year. It was the 10th anniversary of my son drowning when he was just 19. Alex would have been 29 this year. I wrote a poem as catharsis and to commemorate the 10th anniversary of his death. I have been writing prolifically all year.
Thinking about it I guess throughout life I have been writing poetry on and off (even before I returned to it seriously this year). Whenever there was a family event, a wedding, funeral etc, people would ask me to write a poem to read out or perform.

1.1 What was it about “The Scarecrow” that impacted on you?

My dad’s side of the family were farmers so the story of the poem appealed, but it was the imagery I particularly liked, of childlike innocence juxtaposed with adult duty – of the scarecrow keeping watch, suffering for “his master, man”. The narrative of the scarecrow as storyteller, fixed and unflinching, but vital in partnership with the human being. The description of the winter & the cold mornings – “flame with glittering rime” I found so rich.

2. How aware were and are you of the dominating presence of older poets traditional and contemporary?

I think that, growing up in Huddersfield and attending an “ordinary” Secondary school little emphasis was placed on poetry as a genre. Wilfred Owen was mentioned as poet laureate/a war poet but not delved into with any depth. In English literature we were taught about the works of Shakespeare but not as a poet, strictly as a playwright. As an adult my interests have led me to become more aware of how a writer or music artist can be a poet without being 100% described as such. For example, my love of the maudlin music of Leonard Cohen led me to appreciate his poetry. Returning to the part of the question about “dominating presence” I think that the blank verse and poetic meter used by the likes of Shakespeare and Marlowe are prevalent/relevant today in their influence and continuing performance value. When thinking of the contemporaries such as Sylvia Plath and Ted Hughes I think their colourful lives and embellished personas define them as much as their poetry.

It differs depending on how I have slept (how many times I am awake babbling words, ideas or lines into my dictaphone)! Most days after getting the coffee, feeding the animals (chickens, ducks, dogs) I go to my office and firstly type up anything from the dictaphone into my “ideas” folder. Depending on where I am with a particular piece, I may work on a poem or outline – editing – changing – playing with structure. If I have a firm idea for a new project I may spend the later part of the morning researching my theme, history, language. Mornings are more about focused work (as that is when I am most focused). After lunch, which is always accompanied by music, I will give the dogs a quick walk. Depending on how “in to” a particular piece of writing on a given day the afternoon may be spent working on a that poem. If not I will either read poetry, “fiddle with”/edit my growing portfolio…or both. I do have a “day job” as well, working as a biochemistry analyst, but I have described a typical days writing…Which I usually do 3 days a week. I try to read some poetry or prose every day as I feel it is as important to read as it is to write.

Gosh – everything! Life. The ridiculousness of the human condition. Our peculiarities, insecurities, silliness, tendency towards superlatives. They are great fodder for somebody who likes to play with words! I think that, of the thousands of thoughts, feelings, emotions, interactions we have every day, at least some of them are worth using in the future. Recording them. Adapting them. Making a story out of them – so that they are eternal rather than fleeting. That is my main motivation, although sometimes simply a word or a couple of words will come into my head and I know that I have to create something around them – build a story wall around the foundation words. I think the drive to write is innate.

Try to do even the smallest piece of work really well, and don’t rush. Quality over quantity. If that doesn’t work and you get stuck – maybe it is time to step back, take some time out and wait for the zest to come back.?

I remember reading (and re-reading) a book called “Down The Bright Stream” by “B.B” when I was very young, and being blown away by how magical the language was. How the words combined made me feel warm, excited and created such rich imagery in my head. It was about the four remaining gnomes in Britain; Dodder, Cloudberry, Baldmoney and Sneezewort, and their quest to stop an ancient countryside brook from drying up. The seam of imagery sewed in my mind from that book remains with me to this day. It is something I try to embroider into my work – that immersive sense of being a part of the poem, the story – the words creating almost a “false memory”, as if you’ve been there and experienced what is being written about.
It was the same with a lot of my early reading – such as Tarka the Otter and the Brer Rabbit books. I liked to read about nature, and animals…using their stories as morality learning. I incorporate nature and animalistic terms into my poetry today, particularly when trying to describe certain human traits.

Gillian Flynn. Because of her unflinching bravery in her use of language – to shock – to repulse – to excite! She writes as you would dare to be able to speak. Her characters are rarely like-able, but extremely “readable”, and I appreciate how she transcends and upturns the gender stereotypes. Basically, she tells a damn good tale!

Because it is not enough to have the ideas, thoughts, words, emotions in my head! I need to act on them, develop them. Share them! It makes me feel good to do so.
…and I LOVE words, and playing with them, twisting them, juxtaposing them. Writing lets me indulge in my “word play”.

10. And finally, Billy, tell me about the writing projects you have on at the moment.

I am in the process of developing a poem I wrote into a “poetry play” – a mini epic! I want to tell the stories of the characters I introduced in the original poem from different perspectives over the course of a few years. My idea is to create a story, in verse, with a rich structure and the occasional plot twist, which could (and hopefully would) be developed into a piece of theatre or TV. I am also working on a manuscript of poetry observing the daily triumphs and tragedies in life, the micro-annoyances, laughs and irritants – humorous anecdotal poetry.