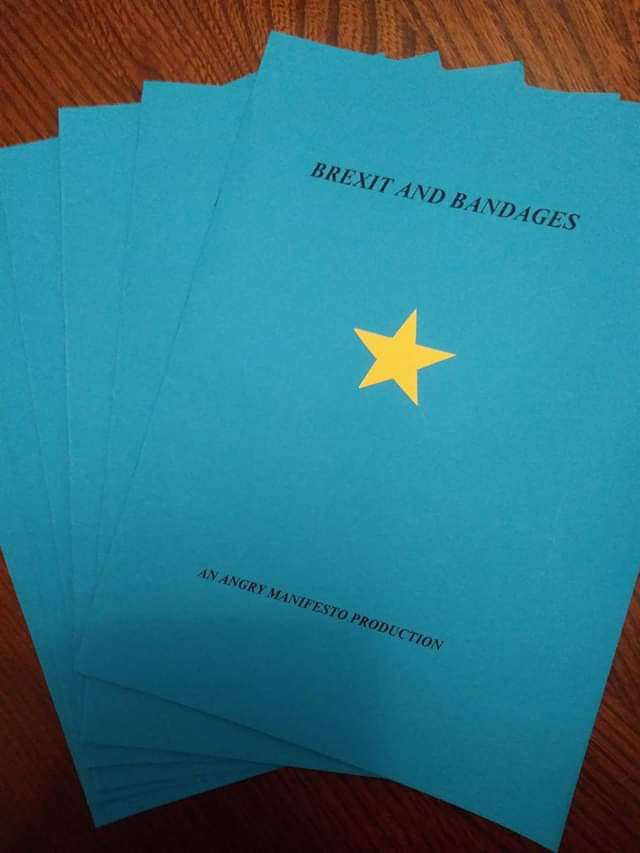 was a professional report writer with the National Probation Service for 30 years. After retirement in 2011, freed from the shackles of formulaic conformity, she took a Master’s in creative writing,  passing with distinction. ‘It was lovely to make stuff up and write in less formal language’, she said, sipping her full sticky-up-spoon Yorkshire tea. She took to writing poems in 2015 during a family bereavement, and found she enjoyed the craft. She has had published poems in a number of on-line and paper magazines.

Oh. I started to write poetry when my mother was dying. It was really  cathartic to get the emotions out. That was in 2015. My poetry still comes from somewhere deep, and now most of it is political in the sense of how the unfairness of an uncaring world affects ordinary people. I get so angry, so sad, and a lot of work is done in a rage. You’d think I’d hate it, but I don’t. Maybe, for me, this sense of injustice and the beating heat of the poem go together perfectly.

Ha! My dad. Beautiful, stubborn Irishman with a great love of Yeats, of  Tennyson, Milton, Shakespeare. My first memory of poetry was William Allingham’s the fairies, and then the opening scene of Macbeth with my dad prancing about the room with a wig, a mop, and my gran’s shawl, his cackling witchy voice extremely effective. He recited so many fabulous poems and plays in our living room. The ballad of Jean Desprez, dangerous Dan McGrew and the lady that’s known as Lou. How Horatio held the bridge, the battle of Nasby, in Xanadu, the ancient mariner, Dylan Thomas’ under milk wood.

That was really all I knew. School concentrated on classic stuff. Keats, Wordsworth, Spenser, Hopkins, Milton. We managed to get to Stevie Smith, and war poetry, including one by Edith Sitwell which, for some unaccountable reason,  stayed with me for a long time. I never bought or read modern poets until fairly recently.

4.  What is your daily writing routine?

Personally, writing poetry must have an element of freedom. If it becomes a task, I’m done with it. Mind, once I’ve written a first draft, I will work for hours, sometimes days and months, tweaking, changing it. I don’t write long hand either,  I type it on my kindle.

5.  What motivates you to write?

I’m lucky in that I have a lot of leisure time after having retired. I have no set      times for writing. Usually something on telly, or witnessed, sets off a poem. There is so much going on in the world, mind boggling stuff too. Material is an ocean.

That is a really difficult question. I read voraciously all the time. I will read anything without fear or favour. The one lesson I’ve taken from all writing is that imagination can create a universe, but reality is also a construct in the mind of the reader. I take information from every part of life. At the moment I’m into Korean and Chinese TV series. Am loving the cinematography. It’s new history to me as well.

Fiction; I think Cormac McCarthy is brilliant. All the
Pretty Horses, first chapter, is my favourite piece of writing. So wonderful it’s enough to make me give up because no one can match its perfection. I like Margaret Atwood. Genre wise, I’m a great fan of fantasy and science fiction.

Drama; Without a doubt Martin MacDonagh is my favourite playwright. The Beauty Queen of Lenane is a superb play.

Read. Read everything, the good, the bad, the banal. That’s how you learn the     difference. As to actual writing. Do it as often as possible. Stick it on line in closed groups. See what others think, and never be afraid of criticism. Once you’ve got a bit of experience send your work off to a publisher. Don’t give up. Accept rejection. Listen to feedback, but also have the courage to keep to what you think is right – it’s a fine line. Don’t stick it in a drawer. That’s all.

Nada at the moment as I have lots of life getting in the way, though I have a number of poems first drafted which need revisiting. This year coming, 2019,  I am planning to put together a pamphlet and send it off somewhere. I’m also planning to have a go at competition. Other than that I am trying to improve my work, and doing open mic and gigs to gauge response, and because I enjoy them.
For the last three years my aim has been to simplify  syntax for clarity. I figure you have to strip back to basics and then build. So maybe next year my range and style of poetry might expand. Even if you can’t see the road, the road still remains, eh?. Lol.