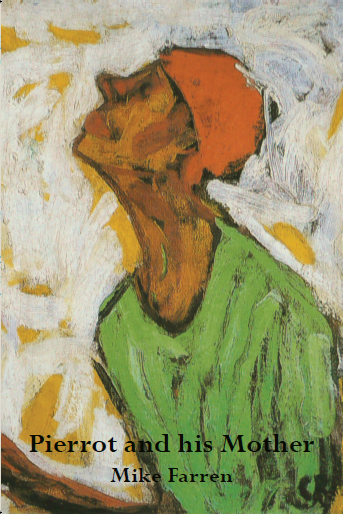 Mike Farren is an editor in academic publishing from Shipley, Bradford. His poems have appeared or are forthcoming in journals and anthologies, including The Interpreter’s House, The High Window, Strix, Riggwelter and Valley Press’s Anthology of Yorkshire Poetry. His debut pamphlet, ‘Pierrot and his Mother’ was published by Templar Poetry in 2017 and in 2018 he was one of the ‘canto’ winners for Poem of the North. He is a member of Beehive Poets and Wharfedale Poets, publishes under the Ings Poetry imprint and co-hosts the Rhubarb open mic in Shipley.

I have written poetry for almost as long as I can remember but I can date when I ‘really’ started writing to two specific things in 2014. The first was that I visited a friend in London for the weekend and went to see Dennis Severs’ house (https://­www.dennissevershouse­.co.uk/) in the East End. When I came home, I had to write about this and was so pleased with the result that I wanted to carry on writing.

The second thing was that I went to my first ever workshop, at the Ilkley Literature Festival, with Kim Moore. Apparently, what I wrote made Kim cry. I thought that if I could produce that effect (on such an excellent poet) with an early attempt, I really wanted to keep going!

1.1. Looking at your link they try to convey the Eighteenth Century as an immersive experience for all five senses.

That’s right. There was a real sense that the 18th century was tugging at you and doing strange things with time. I wanted to convey that feeling.

time assuming “a granular form”. It was as if the house had stopped time from flowing and you could begin to notice it as dust or grit trapped in corners or spiders’ webs.

1.3 Very visceral..Do you try to appeal.to all five senses when you write?

That’s an interesting question. I think that I’m always aware of them. I’m probably most concerned with the emotional effect but I realise that the way to get to the emotions is through the senses.
2. Who introduced you to poetry?

My father had no particular notion of poetry but he loved words and wordplay, so I think he pre-disposed me to it. My slightly older next-door neighbour introduced me to music in which the lyrics were significant – Bob Dylan, Joni Mitchell, Jagger/Richards (at their best)… From there on, it was more formal thing of studying English at school and reading texts by Donne and Marvell, Keats, Eliot and in particular, Yeats.
However, until the change I mentioned in 2014, I had only been vaguely aware of modern – let alone contemporary – poetry, so it was finally encountering some practising, mostly younger, poets – Kim Moore, Helen Mort – and starting to go to Beehive Poets in Bradford that introduced me to the contemporary scene.

3. Is Yeats a domineering influence?

I don’t think I write at all like him – at least, not these days. I have probably also reined back on the self-mythologising and I don’t have a cause that’s the equivalent of Irish independence for him. However, I probably aspire to his mixture of the emotional and the intellectual and his ability to move between the everyday and the mythic.

In that case, yes, though Irish mythology is a resource for him elsewhere. It’s difficult to use specifically classical references without seeming too exclusive. I rarely do so, but I like to try to get the notion that the inner world or the humdrum world are connected to something more universal.

I wish I had one! I like to have a notebook by my bed because I think I get most ideas (not always good ones!) when I’m just about to sleep or just waking up.
When I am able to find time actually to write, I usually set aside an hour or so and try to get down a draft based on some of those ideas. This can be rough – often just prose. Sometimes, though, I notice that there’s a thread of rhyme or that phrases are coming out with a consistent rhythm and I take this to point towards the form the poem wants to take.
Apart from the notebook, I usually work straight to computer. Drafting is fairly incremental – I tend to read things out and see how they sound, then change odd words or line breaks to make them sound better. I only occasionally re-start from scratch – when a poem clearly isn’t working but the idea won’t leave me alone.
I do want to develop a more rigorous, regular routine, but I’m afraid that’s a work in progress at the moment.

5. Is a stray phrase your motivation to write, or do other things move you to do so?

It certainly can be a stray phrase. I also write a lot about what might seem like insignificant memories but are actually moments that can bear the weight of other things that are in the background – relationships, emotional states or even impressions of political moods.
As I have become involved in groups and have attempted to get my work into more journals and anthologies, I have also had more occasion to write on defined topics. I can begin with a topic that seems to mean little to me but, through research and spending time considering the subject, come up with something that I might be reasonably satisfied with.

For poetry, it’s probably different from everything else. In the day jobs I have done and continue to do, it has always been important to put in the hours, concentrate on the task in hand, prioritise, give due regard to deadlines etc. Some of this has also been true when I have attempted to write prose. With poetry, you can only get so far – but no further – by applying those principles. Having time to write is important but forcing things when you have that time can be counter-productive, leading to frustration and self-doubt (above even the levels that are normal for a poet). Once you’re onto something, I think you do, though, need to be immersed in it – the ideas, but also the rhythm, sound and shape of the thing.

The things that I loved about writers I read when I was young were probably story, musicality and communication. I tried for a time to write fiction and realised I just wasn’t good at handling big story arcs, so with poetry I like to try to imply a story – to give the reader the means to extrapolate from the little I actually have space to say in a poem. Musicality is a work in progress: I rarely use established forms like iambic pentameter these days, but there’s the Ezra Pound thing: “compose in the sequence of the musical phrase, not in sequence of a metronome”. This is so subjective that it’s hard to know if you’re succeeding, but I always have it in mind. As for communication, I have always liked writers who seem genuinely to want to communicate with the reader, even if it means crediting that reader with the ability to fill in the gaps and make connections beyond the obvious.

I just did an interview (me as interviewer) with a poet friend where we discussed the impossibility of giving an answer to that question that you wouldn’t be almost instantly embarrassed by! One of my sources of embarrassment is that I probably have quite a parochial perspective. The one poet who goes against that is probably Sharon Olds. Stag’s Leap was one of the books I was reading around the time of my 2014 ‘conversion’. I think she has a kind of magisterial quality that makes you aware you’re in the presence of someone who really knows what they’re doing with poetry.
Another significant book from that time was Michael Symmons Roberts’ Drysalter. I think I loved the sense of being able to achieve such a massive variety within such a tight constraint (150 poems of 15 lines each).
Established poets I admire are Sean O’Brien for the kind of imagination that can work from the small detail to the big political currents of our times; and Don Paterson, for sheer craftsmanship. There’s also Carol Ann Duffy and Simon Armitage for their ability to communicate.
A generation down from that, the poets I admire are mostly female – Helen Mort for technique, Liz Berry for the distinctiveness of her voice and Kim Moore and Clare Shaw for their courage and visionary qualities – but there’s also Kei Miller, for his ability to straddle written and spoken spheres,
The poet I have enjoyed most over the last few years, though, has probably been Michael Donaghy. Having been dead for 14 years, I’m not sure if he counts as one of “today’s writers” but as far as I’m concerned, he had everything.

Read! Do it actively. Identify the writers who speak to something in you and try to work out how they achieve it. Also do it passively. Get the rhythms of good poetry (or prose) into your muscle memory. And write. My description of my approach above might sound a little undisciplined but I have to admit that I didn’t start getting better as a writer until I started practising.

Very much so. We’re kind of back to Yeats and his “Irish poets, learn your trade / Sing whatever is well-made”.

10. I agree.
Finally tell me about the writing projects you have on at the moment.

I have recently finished putting together a collection. The core of it is a sequence of poems that are mostly far from obviously political in themselves but that I hope will be able to build a cumulative political sense. I am looking for a publisher at the moment.
Secondly, I have written a sequence for music, on the subject of the moon. I am working with composer Keely Hodgson, who previously worked with poet Laura Potts on her North and Mourning sequence. The idea is that we will put on some performances with a soprano and a piano trio.
I have a vague idea of trying to curate a sequence of poems – translations or poems written in response – from different writers to coincide with the 200th anniversary of Baudelaire’s birth in 2021. This is still fairly embryonic.
Finally, I have done some small-scale publishing of my own, putting together anthologies and collections for friends. I am currently looking to take this further, in collaboration with a few other people from the West Yorkshire poetry scene. We hope to launch this within the next month or so.