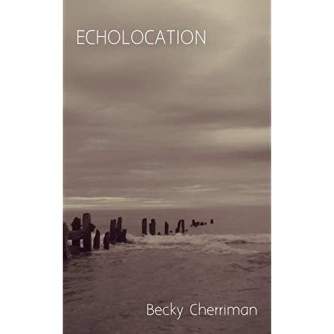 Becky Cherriman is a writer, performer and workshop leader based in Yorkshire.

Becky’s first poetry collection “Empires of Clay” was published in November 2016 by Cinnamon Press. Her poetry pamphlet “Echolocation” published by Mother’s Milk in February 2016 was longlisted in the Saboteur Awards 2016.

Becky has written short stories and poetry for commission, performance and publication and was shortlisted in the 2009/10 Fish Short Story Prize. Successes include second prize in the Ilkley Literature Festival Open Mic for Paisley Quilt and first prize in the Speakeasy Open for her poem Namesake. Her poetry has been published by Mslexia, New Walk, Envoi, Mother’s Milk, Bloodaxe, Well Versed, Seren and in “Poets For Corbyn” and “Yorkshire Poetry Anthology”. It has manifested on umbrellas, on the walls of a recording studio, in libretto form and in Italian translation.

Becky was resident poet for Morley Literature Festival in 2013 and lead artist for Altofts Festival In A Day 2016. She is co-writer and performer of Haunt, a site-specific theatre commission for Imove, a project about homelessness that featured material from her, as yet, unpublished first novel.

Much of her time is dedicated to other people’s writing, running creative writing and combined arts workshops with different groups across Yorkshire – a job she adores. http://www.beckycherriman.com/

As a teenager I had a tough time and began writing poetry as a way of dealing with what was happening to me and to articulate my understanding of the world. Looking back on those early notebooks and the rawness of the poetry on the pages makes me cringe. Still, at least my handwriting was neat! The more crafted my work becomes, the more untidy the writing of early drafts becomes. I wonder if this says anything about creativity more generally or whether it’s just me.

Like most people I was introduced to poetry at school. I was lucky in that I had teachers who were passionate about creative writing and encouraged me. My mum went to uni as a mature student and when I was 18 she met her long-term partner who is a big lover of literature. At every spare moment I delved into all the anthologies and collections they had lying around the house and lost myself in them.

As an early teen not much! My upper school English teacher didn’t exactly manage to infuse a love of poetry into me or my classmates but in my late teens I started reading more independently. I moved town and, with my new school, I attended an Arvon Foundation Course with Carol Ann Duffy and Liz Lochhead. At the time I was reading philosophy and experimenting with writing surrealistic poetry, which probably didn’t make much sense! Duffy hated it and pretty much told me so in my one-to-one. She said that every line and word of a poem should make immediate sense to the reader. I still don’t agree with her on this – sometimes the best poems are those you need to puzzle over and I’m a big fan of deliberate, considered ambiguity. But it did make me consider the issue of accessibility in my work, a question that is still not satisfactorily resolved for me.

Through English A level (in which I only attained a D due to illness), I discovered Renaissance poetry like Shakespeare’s sonnets, John Donne and Andrew Marvell – I loved their wit and enjoyed T.S. Eliot but it was Dylan Thomas who I fell in love with. It was the lyrical way he used language, his imagery and those big themes of death and growing up and religion. My teacher introduced me to the term pantheism and there was a huge aha moment when I realised she’d named my understanding of ‘god’ although I’d be more likely to use panpsychism or panexperientialism now. I suppose I found my spirituality through poetry and the two have remained inextricably linked. So yes, I was aware of older poets but I found them stimulating and inspiring rather than oppressive.

I’m always bleating on to workshop participants about how important a writing routine is but I haven’t always been good at keeping to one myself. Most of my living is made from running workshops either as a self-employed writer or in my small role at the University of Leeds as Creative Writing Community Development Officer. There is a lot of planning and reflection involved in this work and an increasing amount of admin and I also have chronic illnesses and some caring responsibilities so I don’t always have the time or the creative energy to write daily. Having said that, last year I set myself the target of writing for an hour daily first thing in the morning and trying to set half days aside for writing when I can. I’ve slipped a little the last couple of weeks but, despite being as busy as ever, I’ve had a very productive year with my writing and I put this down to the regularity.

Injustice. Nature. How people relate to one another. Humanism. An inner compulsion. Frustration.

Throw yourself into everything you do and always go the extra mile for those you work with if you can. Be diligent in everything. Like water you flow into every available channel but sometimes this results in you drying up. You know you should rest more but find that hard when there is so much incredible and exciting work to be involved with.

When I was 13 I read Oliver Sacks, The Man who Mistook his Wife for a Hat, Eric Berne’s Games People Play and The White Hotel by D.M. Thomas. As well as the poets mentioned above, I also read the Brontes and Plath and all the science fiction and horror stories in Eccleshill Library.

I could talk about how I think they or the books I read in my English degree might have influenced me. But instead I’m going to answer you with a quote from Walt Whitman’s Leaves of Grass. ‘No longer take things at second or third hand nor look through the eyes of the dead nor feed on the spectres in books. You shall not look through my eyes either nor take things from me, you shall listen to all sides and filter them from yourself.’

I’m loathe to identify the precise points of influence because I think that would be disingenuous to my usual process, which is more akin to what Whitman suggests, a kind of creative homeopathy which is free, at least measurably, of the original substance and yet infused by it. Necessarily so perhaps because my memory doesn’t keep hold of precise wordings effectively. I realise that referencing the suspect science of homeopathy is risky but that doesn’t make it less true.

This is always my least favourite question in interviews. There are so many. Where do I start? My answer is dependent on what I’ve been reading. Lately it has mainly been novels.

Arundhati Roy for the same reason

Zadie Smith for her characters

Miranda July for using what could be personality flaws to create a compelling persona that is exactly the right vehicle to deliver her stories, whatever form they take

Eimear McBride for her brilliant energy of form

All the novelists I’ve reviewed on my blog.

When it comes to poets, I’d like to mention those I’m working with at the moment – Sai Murray, Michelle Scally Clarke, Cherie Taylor Battiste and Julie Easley for their bravery in tackling the difficult subject of race from unexpected angles whilst making it entertaining – no easy task. And my critique partner Matthew Hedley Stoppard for his touches of shamanism, acute cultural references and unashamed celebration of the shabbier sides of life.

Move to London. A less facetious answer would be: write and read as much as you can. Be open to learning your craft in all manner of ways, including non-traditional ones. Think critically but kindly about your own work. Also, grow used to rejection – you’ll get a lot of it, especially if you don’t live in London.

I’m also part of a roundtable discussion with Amina Alyal and Lucy Arnold at Ilkley Literature Festival on 14th October to launch the Women Write Now issue of Moving Worlds journal. We’ll read our poems – mine are based on the volunteering I did with refugees in Calais – and discuss the intersections of writing, womanhood and the contemporary moment.

I’m also dabbling in short stories, slowly working towards a collection of poetry and looking for an agent and or publisher for my speculative fiction novel. You can see the problem I have with finding time to rest!

You can see more about my work here: http://www.beckycherriman.com