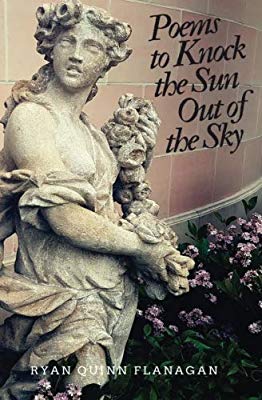 Ryan Quinn Flanagan is a Canadian-born writer presently residing in Elliot Lake, Ontario, Canada with his wife and many bears that rifle through his garbage.  His work can be found both in print and online at many cool joints such as: Ariel Chart, The Rye Whiskey Review, Under The Bleachers, Outlaw Poetry Network, Evergreen Review, Cajun Mutt Press, and The Dope Fiend Daily.  His personal website is: http://ryanquinnflanagan.yolasite.com/

For me there was no single inspiration.  It is much more of a compulsion.  I’ve just kind of always done it since about the age of ten onward.  No specific reason or subject matter, I just kept doing it and haven’t stopped.  I feel much more comfortable expressing myself through writing than I do in day-to-day conversation or other social interactions.  I’m quite the shut-in and introvert in many ways so writing offers a way to express myself that is fairly anti-social.

I guess that would be the public school system.  Within months of switching schools, my new school made you do two types of public speaking as a way of promoting socialization and communication skills.  The first was speeches which you had to do in the first half of the school year and the second was poetry.  Each student had to stand up in front of the class and recite a poem that had to be longer than 2 minutes in duration.  Your classmates marked you on such things as: verbalisation, eye contact, clarity etc. and the teacher also marked.  It was truly terrifying!  Most students went to the library and found a poem to memorize and recite.  I was the only student who wrote my own.  It never occurred to me to just go find one.  I am slow to everything.  They made us do this each school year.  I just kept writing new ones each year and even when the school didn’t ask me to do it anymore.

Not that much until I went to university.  Before that, I had read some Leonard Cohen and other things such as Siegfried Sassoon’s first world war trench poetry and some Auden, Roald Dahl, Dr. Seuss and Shel Silverstein.  But I really was a true novice in such things and almost completely unaware of what was really out there.  I just stumbled along with my own thing and worked back breaking jobs.  At university, I spent my nights in the library there and read everything I could get my hands on.  Not just the poems themselves but on the lives of the poets and various philosophies and artistic movements behind them.  Each offering seemed to open so many new doors.  I did that for four years, making friends with the security guard at the library because I pretty much lived there during that time.  It was amazing to see all the things I really had no idea about.  My education really had nothing to do with the classroom.

When I have an entire day to write, I don’t shower.  I want the dirt of living on me and I want to feel it.  I make some oatmeal and listen to music before heading upstairs pouring some wine or beer and putting on some classical music and writing for about six or seven hours.  I often have no notes or idea of what I will write about.  I just zone out and clack away.  I am usually pretty sauced by the time I am finished but the poems are there.  Usually 20-25 on a good day.  Then I make a late dinner and watch some television before going to bed.  I repeat the process as many times as I can throughout the year, almost always eating the same thing and going through the same process.  The rest of the time, life invades and very little writing gets done.  I have always written in spurts when I can find the time.  I used to write late at night, but now it’s more in the afternoon and early evening.

As aforementioned, it really is much more of a compulsion for me.  So nothing really motivates me to write.  I do enjoy seeing what my friends and other writers are doing though.  I always find that interesting and inspiring.

I try to make as many days as I can clear for writing.  Then I drink and write.  When I feel I have enough poems to construct a book, I print them out and see what I have.  Then I build the book as if I were constructing a concept album.  Music has always been such a big influence for me.  I loved all those great album covers growing up and listening to the music and reading the liner notes.  I treat books the same way as I do albums.  I try to create something that pops like all those great albums from my childhood used to do.

Early on it was a lot of Dr. Seuss and Shel Silverstein and Roald Dahl.  Both Huxley and Orwell were a huge influence on me in my teens.  I read them as warnings about both technology and human nature.  Along with William Golding and Salinger as well.  Then I found the Romantics and the Beats and enjoyed their musicality of language and image.  Then the more realist writers such as Bukowski and Fante provided a much more assessable and relatable form of writing.  I’ve always been heavily influence by strange writers or stories though.  Jules Verne and Isaac Asimov were huge, along with Kafka and Edgar Allan Poe’s strange stories and Richard Brautigan’s humour along with bp nichol and e.e. cummings experiments with form.  And William Blake’s art and Emily Dickinson and so many others!  All these things have created a hodgepodge that has influenced me greatly.

Oh, there are just too many cool writers out there at the moment to name here.  We’d be here all day.  My boys at the Frat are doing amazing things, but yeah, there are so many people out there right now that the future looks bright.  And not just for writers, there are so many fantastic fine artists and publishers out there really pushing things along.  Even a few columnists doing great things.  The wealth of stuff out there at the moment is great to see!  So many people out there creating is an amazing thing to me.  I try to support them in any way I can and I know many others who do as well.

Just a compulsion for me.  Even when I am not writing poems, I am always scribbling on oatmeal packets and spiral notebooks and making lists and observations and such.  I just scribble over everything, always have.

Just be yourself and try to find your own voice and way.  When you start out there will be some mimicry, but as you go along more of yourself should reveal itself over time.  Trust your instincts and don’t let others tell you how to write or what is acceptable to write about.  Go for broke and do not be afraid to experiment, try to surprise yourself.  If you can still do that, than you’re doing alright.  Besides that, just sit down and write.  That is the only way it will happen.  All the rest of it is secondary to sitting down to the actual act.  Bang those keys as much as you can and just let it come.

11. Tell me about the writing projects you have on at the moment.
Many writing projects on the go at the moment, I am always working on something.  I find it is good for me to stay busy.  Currently, I just released a new book with Pski’s Porch titled: Poems to Knock the Sun Out of the Sky.  New collections while Weasel Press and Marathon Books should be out in the coming weeks titled: In Winter’s Dreams We Wake, and Once Around the Maypole, Twice Around the Sun respectively.  I am also working on a new collection of short stories with super talented artist Marcel Herms for Alien Buddha Press.  We are just creating and putting it together now.  Marcel and I are also working on broadsides with John Robinson and a split chapbook early in the new year.  Probably about nine or ten other projects on the go as well with various fine artists and publishers.  I like to stay busy.

Thanks so much Paul!