This is a poem I wrote and read at Glasgow Kelvingrove Museum, aa while ago, celebrating the rebuilding of the Al-Mutnabbi Street, the street full of bookstores in Baghdad Iraq was that car bombed in 2007. I see that books stores have been bombed in Palestine recently, but books survive are rewritten, salvaged and rise again. Al Mutnabbi was a 10th Century poet and the street was named after him.

Waves
“Many a mountain I crossed to witness
I was mountain, seas, I was the sea wave”– Al Mutanabbi

Kept in a tin trunk of memories so that
It may not disappear like sand in an hourglass
We left sediments of the past
The caravans of skeletons,
The geography of sorrow
Nebulous scars, on the shore, with
Timelessness stamped on them.
We harvest coral, pearls,
That swims above the surf, floating in the air
but beyond reach of well-said prayers.
The waves lashing on the rocks, that time has rounded
scored with names of the dead
in a life before this, the print of them
still in the waves, foaming white
Perhaps the waves can read our minds. 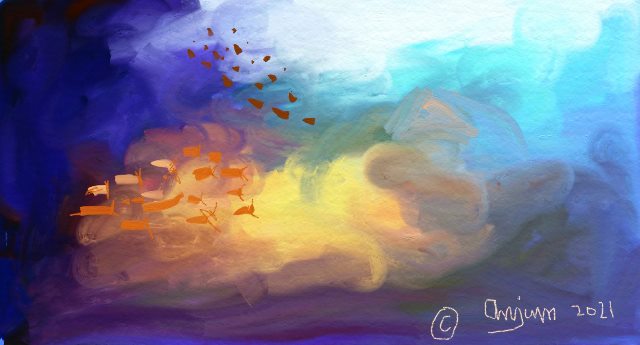 Both artworks by Anjum Wasim Dar

Oceans are one of the many miracles of the Creator as the Earth itself is. The water holds itself yet moves, full of life, rebirth and deaths and fathoms of fluid space, stable for all ships and boats, salty roadways, for travelers transport and sport.

O’ Poseidon bestowed with the power unique
tell us the secret of the two seas that do not meet
yet flow with different colors, wave by wave, move
by move, side by side, a perfect acceptance of diversity,

Poseidon speaks, ‘Man is nothing without the Gods’
oceans or skies the sole power is with the Creator
who loves clear open hearts, He blocks nothing nor
builds walls, see my home has no doors nor windows’

All are free to enter, float, sail, swim dive or dig
I am full of food, fish, color, charms and treasures
but many living beings are careless, inconsiderate
they throw harmful waste trash plastic on and in me.

Water will not become less but will be a source of
trouble for human beings themselves, the dead will
float the dying will cry and curse, the thought makes
me shudder, storms surge, waves rise to great heights,

Water is hurt, it is red now with blood and scales
breathing is difficult, inhale a struggle, exhale an
ordeal, oil blocks unmarked uncharted paths
Oceanides no longer accept offerings from fans.

Home state worries Oceanus, growing more old
countless pennies coins of gold, are useless down
on the sea bed, worthless is such a treasure which
sinks and loses its values, shines and becomes cold.

A revenge rising tsunami results, as the grand
bowl shakes, jolts, jumps and throws up-
beware O’ People …I envision a huge surge…
sing not any songs nor lie naked on the beach

Take me to the ocean, I said.
I wore my ocean-green shot taffeta skirt.
The wind shifted its colours
from red to green, making it
a magic lantern, glittering
like the opalescent sea.
The dunes stretched for miles.
Cars simmered in the heat haze
like jewels. Released from austerity,
an exam room weighted with words,
I wanted to see space, a wide horizon,
sky full of gulls, gossiping.
I wanted to be lapped by a salt tide,
buffeted by waves and cleansing winds.
My white legs became a mermaid’s tail,
my toes sensed the ribbed sand,
imprinted by travelling waves.
You took me home from the ocean
that summer and married me.

Full fathom five thy father lies,
of his bones are coral made;
those are pearls that were his eyes;
The Tempest

What the sea does, and does so well,
is to embrace and change
all things to its cool element.

From the Titanic a suitcase is lifted,
like a drowned dog, its body leaking;
folded, laundered shirts are stained.

A pile of crumbling junk, that ship;
crunching bacteria fasten
nibbling mouths on its very steel;

the railings’ fur of barnacles
outlives the stoles of women.
The champagne may still be drinkable.

Shoals of fish play small chase
in and out the rusty portholes.
Where is Hartley’s violin?

-Angela Topping (Both from her book “The Way We Came”)

Bathing on the Titanic

Brass taps spurt a salty waterfall
drawn from the ocean below, piped
warm as blood, from heated tanks.

Health-giving baths with iodine and cobalt,
as boasted on posters, urged by doctors.
Rinse off with fresh water from a bucket

standing to attention behind the bath.
Such luxuries of scented soap and cloudy towels
while the valet lays out dinner clothes.

After brandy and cigars, a game of cards.
until it’s time to take another bath
in salt water, this time taken with ice.

He’s out on the patio,
reading. The sun is just
starting its slow slide
seaward,
dipping russet toes
into the bay.

He pours coffee,
scalding hot, into a blue
and white striped mug.
The mountains are hennaed.
The Atlantic Ocean burns
as the sun goes down in flames.

He makes his way indoors,
marking his place with care,
bringing cafetière and coffee cup,
smiling as the sun finally drowns itself,
and the moon comes into her own.

Below, at night, I hear the salt airs of the sea,
a poignant mermaids’ tune we sailors fear,
the keening of the pitching ship, as, at the prow
our Jenny breasts the waves, the only girl aboard.

Timbers sigh as we sail farther from our home.
‘To wives and sweethearts – may they never meet’,
the awful joke accompanies our daily rum,
hides our longing like sailcloth covers the sky.

Stars grow unfamiliar as we sail beyond our scope.
I think of my Nancy, at home with our little ones,
waiting for money and these scrimshaw toys I carve.

The sea has made men of us all, and yet
it’s land we long for, till we grow homesick
for black and ice-berged sea, its infinite deeps.

First published in I Sing of Bricks (Salt 2011)

Baptize me
In your
Red Sea,
So I may know
What you know,

That I may go
Where you
Go.
Make a way,
Away from the waves

Of humanity’s woes,
That we
Might undergo
A transformation
Of peaceful collaboration,

Admitting over and over again,
That we must drown
Our own hopes and sins,
To keep
Each other afloat, in this world of waves and deep.
-st

Loud and large,
Overwhelming, slapping –
Waves, water
Calm, then clapping.
Find rest by my side
As you listen to the tide –
A reminder of who you are
As I rush near, far.
Rush away, like me –
Keeping ears and eyes open
That you may hear, see.
Don’t vacillate
In my vastness,
But rest
Even in my restlessness.
Then, steadfast and serene,
I will lull you to sleep.
-st

“Humble Me” (originally published by Poetry Super Highway), and “Ocean” (which was once featured in a collaborative photo project by Mr. Roberto Cerini).

is the author of eight full collections of poetry, and four pamphlets, all with reputable publishers. Her work has appeared in a wide range of magazines, including Poetry Review, Magma, Stand, The North, The Dark Horse, and over 100 anthologies. She is a former writer in residence at Gladstone’s Library, Hawarden. Her poems have been set for A level, featured on BBC Radio’s Poetry Please, and been included in teaching materials for the OU, The Samaritans, and other causes. She has performed at several festivals and in many other venues.

was born in 1954. After completing two English degrees at Liverpool University, marrying in 1976, she worked unhappily in the Civil Service, having steadfastly ignored all career advice because she wanted to be writer.

2 thoughts on “#WorldOceanDay #30DaysWild 1st-30th June. Day Eight. 30 Days Wild is The Wildlife Trusts’ annual nature challenge where they ask the nation to do one ‘wild’ thing a day every day throughout June. Your daily Random Acts of Wildness can be anything you like – litter-picking, birdwatching, puddle-splashing, you name it! I would love to feature your published/unpublished photos/artworks/writing on your random acts. Please contact me.”