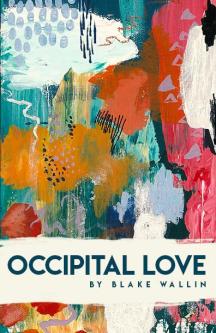 is the author of the two full-length poetry collections No Sign on the Island (Bottlecap Press) and Occipital Love (Ghost City Press), as well as the chapbook Otherwise Jesus (Ghost City) and the microchap The Lucidity of Giving Up (Ghost City’s 2016 Microchap Series), several plays, and a novel. Last summer, he attended the 2018 Kennedy Center Playwriting Intensive (led by Gary Garrison) and a 2018 Virginia Quarterly Review Summer Workshop taught by Mary Szybist. Much of his work (poetry and fiction) can also be found on Maudlin House.
No Sign on the Island, by Blake Wallin
https://ghostcitypress.com/books/occipital-love
https://ghostcitypress.com/chapbooks/otherwise-jesus
https://ghostcitypress.com/2016-summer-microchap-series/the-lucidity-of-giving-up
https://maudlinhouse.net/author/blake-wallin/

The need for a different form, a form that would contain the emotional revelations I was  going through while still staying true to the journey my writing was taking me on constantly.

I’d written fiction in high school, and in college experimented briefly with playwriting (both of which I have recently resuscitated in my writing life), but poetry was and will always be my first true writing love, the one that enabled me to say what I needed to say at a time when to not say those things would have been detrimental to my health and wellbeing.

Like almost everybody in America (even the poets) I was introduced to poetry before I knew what it was or could do. I had enthusiastic teachers in high school who taught poetry but I either couldn’t listen or they portrayed its effect wrongly. Either way, the person who really introduced me to poetry was a professor at Wheaton College, the late Brett Foster, a Christian poet concerned with beauty but not at the expense of being real or actual. While I’m not a Christian, I am still concerned with Christianity, and while I don’t ascribe to the theory of beauty Christianity sometimes entails, I am still very much concerned with the possibility of beauty.

None whatsoever. If I had been overly concerned with the dominating presence of older poets, I’m almost positive I would not be writing now, or would be writing to a lesser degree. I was just over in my own world, trying to heal from the real-life non-poetry world by reading Rimbaud and Ashbery. In a poetry world so dependent on mentorship and favouritism, it seems wrong to ask that question, but, even though I have benefited from older poets’ throughout my brief poetry career, it’s a necessary question in that it should 100% not matter what older poets have to tell you at first. That’s for later.

I don’t have a routine. It sounds bad, but I’m writing in three different genres (poetry,fiction, and playwriting), so I just constantly write and switch genres when one begins to bore the shit out of me. Honestly part of the reason I’m so spread out genre-wise is to avoid writer’s block haha.

Some weird mixture of boredom and necessity.

Somehow both severe and lackadaisical.

I read a bunch but have a handful of writers I return to most often: J.R.R. Tolkien, Arthur Rimbaud, Roberto Bolaño, John Ashbery, Annie Baker, Martin McDonagh, Chaim Potok.
These are the authors I hold close to my chest, and I’m fine with being able to count them on two hands – how else would I be able to hold them close to my chest?

I’m going to assume you mean one writer; otherwise the list would be impossibly long.

Hmmm. For fiction, Colm Toibin. Looking at his career, you could accuse him of finding a niche, but it would be so far from the truth as to be laughable. He’s an established writer and novelist who reinvents his form and style with each book while still being praised as an inventive and consistent prose stylist. Also, he’s very nice (I met him at a book signing a few years back), and has a charitable streak a mile wide and a mile deep. This means he has an edge on many of the writers whose writing I severely admire but whose politics or actions I despise (i.e. Michel Houellebecq or Jonathan Franzen). For poetry, probably Anne Carson.

I feel like it’s almost wrong to not do something other than writing in addition to writing.

People have this romantic association with writing that hasn’t existed forever; the job vs. writing dichotomy bores me. Not because it’s untenable in the modern world and economy, etc. – it’s more that it’s untenable for me personally. I would get so fucking restless it wouldn’t be worth it: it would be like living in an abandoned abbey as a monk that doesn’t believe in god. What would the point be then? Just to worship,the act of worship itself? It doesn’t make sense to me.

Which is not to say writing is a hobby for me; it’s more a personal mandate some part of my intuition has given me that I guess I could choose to ignore but only at the expense of my wellbeing. I could choose to play tennis instead, but my mind would start mapping a story out of it, and I’d botch the match, which would be no fun.

I wouldn’t say anything, I would just hand them a pen and paper (or ask them to get out their phone) and ask them to write out that question, answer it themselves, read me the result, and then I would just nod and say that writing is doing that over and over consistently. Either that or I just wouldn’t answer them and walk away; it would depend on their tone when asking the question.

My third and fourth full-length poetry collections, my fourth play in a four-play cycle, and my second novel (in a planned four-novel cycle). The new poetry collections are so far indebted to a kind of anti-lyric poetry pioneered by some Ahsahta poets (including C. Violet Eaton) and Wayne Johns. The plays are kind of a magical realist riff on Angels in America, using portals and the American South to explore the concept of being closeted and how the past affects the future and vice versa. The novels are (except for the first) all set in a post-apocalyptic future that involves talking animals (evolved animals after Mars crashes into Earth and the humans colonize the Mars portion), and will eventually feature androids as well (and just plain old humans as well).