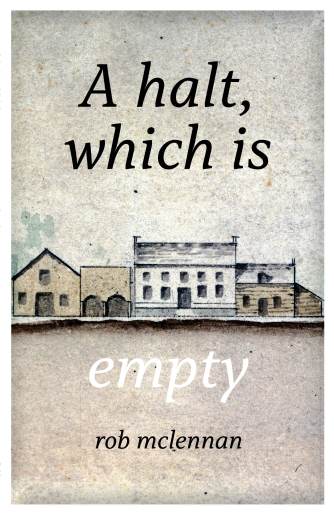 Born in Ottawa, Canada’s glorious capital city, rob mclennan currently lives in Ottawa, where he is home full-time with the two wee girls he shares with Christine McNair. The author of more than thirty trade books of poetry, fiction and non-fiction, he won the John Newlove Poetry Award in 2010, the Council for the Arts in Ottawa Mid-Career Award in 2014, and was longlisted for the CBC Poetry Prize in 2012 and 2017. In March, 2016, he was inducted into the VERSe Ottawa Hall of Honour. His most recent poetry titles include A halt, which is empty (Mansfield Press, 2019) and Life sentence, (Spuyten Duyvil, 2019). An editor and publisher, he runs above/ground press, seventeen seconds: a journal of poetry and poetics (ottawater.com/seventeenseconds), Touch the Donkey (touchthedonkey.blogspot.com) and the Ottawa poetry pdf annual ottawater (ottawater.com). He is “Interviews Editor” at Queen Mob’s Teahouse, editor of my (small press) writing day, and an editor/managing editor of many gendered mothers. He spent the 2007-8 academic year in Edmonton as writer-in-residence at the University of Alberta, and regularly posts reviews, essays, interviews and other notices at robmclennan.blogspot.com. He has a million links to books, chapbooks, interviews and other activity at his author page: robmclennanauthor.blogspot.com

That’s a good question. I’m not entirely sure, and it’s a question I was asked by another not that long ago. I think poetry found me, and the finding, during my early high school years, solidified some of the thinking I’d already been attempting. Writing simply made sense.

It helped that I had a good social group around me during that period, many of whom were also experimenting with the beginnings of writing. We even started a small publication that our English teacher put together for us, and I contributed poems, postcard fictions and a couple of drawings.

Once my twenties began, it was the birth of my first child that really made me realize I should either pay attention to “this writing thing” properly, or simply not bother. She was born two months before I turned twenty-one, and I was soon running a home daycare full-time so I could stay home with her (taking in two other children five days a week, ten hours a day). I was writing in a coffee shop three nights a week during that period, from 7pm to midnight.

During my mid-teen years, my girlfriend (the eventual mother of my first child) was a big reader, and she introduced me to many things, including poetry and fiction, predominantly Canadian literature of the period—Leonard Cohen, Margaret Atwood, Margaret Lawrence, George Bowering, John Newlove, Alice Munro, Michael Ondaatje, Elizabeth Smart, etcetera. Through another high school peer, I became introduced to the work of Richard Brautigan, who remains my preferred American writer. I have a soft spot for him and his work I refuse to relinquish.

“Dominating” seems an odd word. Anyone who publishes, especially for an extended period, is going to overshadow anyone younger who hasn’t yet published. Also: I’ve known a great many ‘older poets’ who have been remarkably generous with emerging writers, many of whom might not have managed to get to where they needed to gain traction with their own work without that kind of mentoring. I, myself, spent my teens and twenties encouraged by a great number of well-established writers, including Henry Beissel, Gary Geddes, Ken Norris, Judith Fitzgerald, John Newlove, George Bowering, Bruce Whiteman, Robert Hogg, Diana Brebner, John Barton, Mark Frutkin, Barry McKinnon, Elizabeth Hay and others.

I was aware of other writers only abstractly during my teen years, with few examples. Gary Geddes and Henry Beissel lived close, and I became aware of them through high school workshops. Ralph Connor was very much on my radar, as he’d written extensively on and around my geographic area, but he existed as a historical figure, not as a contemporary one (he sold a million copies of his books in 1900, being Canada’s earliest, if not first, best-selling fiction writer). It was only once I moved from the farm to the city at nineteen that I began moving through bookstores and libraries and multiple reading series, and getting a slow sense of what was happening with writing.

By the time I was twenty-three (1993), I’d started reviewing poetry titles, which quickly emerged into what has become a lengthy engagement with reviewing poetry, fiction and non-fiction books, journals and chapbooks. I started with a column in our local weekly paper in 1994, but by the end of the decade that had fizzed out, which eventually shifted my attention online, and my blog, which began sometime in 2003. For many years, as reader, writer, editor, reading series organizer and publisher, I’ve made it my business to be aware of as much as I possibly, humanly, can.

Before the birth of our wee girls (who are now three and five and a half), I was writing daily from the time I woke until late afternoon, and even kept “office hours” at a donut shop from 1994 to 2000, before shifting over to a coffee shop (once my donut shop closed) where I sat daily for fourteen further years. Once the (more recent) wee children plus our house, I moved from writing almost exclusively in public spaces to sitting at my desk in a home office. These days, I’m either with the children, or I’m at my desk. There aren’t many opportunities for much else.

I’m currently writing around their summer program schedule—three mornings a week from 9am to 12:30pm—before I collect them from the church down the street for further adventures. There are times they are willing to play quietly, whether downstairs or in the living room, which allows me some further time at my desk, but I try to be careful with that. Once September hits, our big one begins grade one, and the wee one most likely returns to her three mornings plus two full (school) days a week, which will allow me some further attention. Perhaps that might even open the possibility that I return to that “big novel” I keep promising myself I’m still working on.

This would seem an odd question to pose to a dairy farmer: what motivates you to milk the cows? Or to a welder: what motivates you to weld? So I offer: this is what I do. I start projects to make sense of things, and to explore particular subjects, thoughts and shapes. I finish projects because I am project-oriented (and am often eager to get to whatever might come next). Perhaps it comes from being the son of a self-directed dairy farmer, but I see what I do very much as existing in a working-class ethic. I get up, I work. I keep working. Very “Alice Munro” in my Scottish-Protestant ethic.

My work ethic is the muscle I utilize to create and complete work. It is something I struggled to establish during my twenties, and has sustained much of my writing since.

George Bowering was a great jumping-off point for my reading and research. He remained my favourite Canadian poet for two decades or more. He is often underacknowledged in CanLit for his wide range, and enormous amount, of editorial work and critical writing. He did, it was said, more critical work on those around him than any other writer of his generation. Through him, I discovered the work of a great deal of writers, from established to emerging, from mainstream to experimental, from Canadian to international. If one thought inevitably leads to another, so, too, my reading and thinking, and Bowering, singularly, increased my awareness exponentially.

And there are multiple books and authors I continue to return to, for rejuvenation, or solace. I’m rereading Jack Spicer these days, for example. Before that, I was digging through, yet again, Rosmarie Waldrop and Norma Cole.

There are many! And too many to list here. But I am always excited to see new works by Lydia Davis, Lorrie Moore, Rosmarie Waldrop, George Bowering, Stuart Ross, Gil McElroy, Jason Christie, Brecken Hancock, Julie Carr, Pattie McCarthy, Erín Moure, Jack Davis, Monty Reid, Stephen Brockwell, Pearl Pirie, Amanda Earl, Stephen Collis, Sarah Manguso, Cole Swensen, Megan Kaminski, Anna Gurton-Wachter, Hailey Higdon, Shazia Hafiz Ramji, Jordan Abel, derek beaulieu, Sarah Mangold, Sandra Ridley, Hoa Nguyen, Jessica Smith, etcetera. There are so many writers doing amazing things! And there are new things to learn and relearn from every one of them. I want to experience it all. I like seeing what I haven’t before, which can often be difficult. I want to see work that challenges the way I think of writing, and thinking.

This is something I know I can do, and do very well. I also really enjoy it.

It makes sense to me when I tell myself that I write. I am a writer.

Be open. Engage with others attempting the same. Edit later. Don’t be afraid to fail.

Since January I’ve been working on a poetry manuscript titled “book of magazine verse,” which plays off Jack Spicer’s title, writing poems that aim themselves toward specific journals and presses. In hindsight, I’m realizing just how little such pointed compositions are acknowledged, and I’m enjoying seeing where the poems end up taking me. If one attempts a couple of poems for Fence magazine, for example, they are going to sound very different than, say, poems that one might send to Grain magazine, so why not play with that structure? So much contemporary literary production would be lost without the little magazine and the small and smaller presses.

I’ve also been poking at a handful of short stories, attempting to get a sense of where a new manuscript might take me, especially since completing a further manuscript of short stories last year. I don’t just want new stories to sound like an extension of what that prior book was doing. I want to see if I can do something different with the tone, and the structure. I’m still feeling it out. I’m also working on a follow-up manuscript of postcard stories, furthering a line begun with the publication of my debut collection of short short stories, The Uncertainty Principle: stories, (Ottawa ON: Chaudiere Books, 2014). I step into that manuscript every so often, but am not in any particular hurry, there.

There are numerous other projects in various states of incompleteness, which I would like to focus on, but I might have to wait until the fall before I can consider any of that. I mean, I’ve a post-mother creative non-fiction manuscript, “The Last Good Year,” that could use reworking. I’m half-through a poetry manuscript, “snow day,” currently made up of two longer prose poems (I haven’t yet decided on what the potential third section might look like). I’ve multiple unpublished manuscripts of literary essays that could use some attention, and re-shaping, for potential publication.

There is so much more that needs to be done.