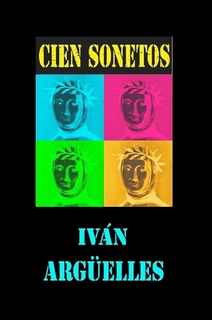 is an innovative Mexican-American poet. Born in 1939 in Minnesota, he was raised variously in Mexico City, Los Angeles and Rochester Minnesota. He is the author of many books and chapbooks. Notable among his works are: “That” Goddess, Madonna Septet, Comedy , Divine , The , FIAT LUX, Orphic Cantos, and the just published Cien Sonetos.

Long associated with the “West Coast Surrealists” he also branched out into writing extended works, including epic poetry. He received the 1989 William Carlos Williams Award from the Poetry Society of America for his book Looking for Mary Lou. In 2013 he received a Lifetime Achievement Award from the Before Columbus Foundation. A retired librarian he has resided in Berkeley since 1978.

For more see the Wikipedia article on him. (https://en.wikipedia.org/wiki/Ivan_Arg%C3%BCelles)

I began writing poetry in high school (ca. 1953/54). My father was a Mexican painter who had educated both me and my identical twin, Joe, to become painters, haven given us lessons in drawing and painting from an early age. However by the time I reached adolescence I recognized that if I continued in this artistic orientation my brother and I could come into competitive conflict, which I wanted to avoid. So I made a conscious decision to choose a different path, that of a poet. I had read a bit of poetry, and was quite taken by the Middle English lyric Sumer is icumen in  Lhude sing cucu. I had also taken my first of four years of Latin, and had already been introduced to Vergil (Arma virumque cano ….). I began reading poetry seriously during my high school years, focusing on the moderns, such as Eliot, Pound and Cummings, though my favorite author was James Joyce, whose work Finnegans Wake I considered poetry as well. In the eleventh grade a poem of mine was published in a national high school poetry anthology.

I don’t recall in particular that anyone introduced me to poetry. I sort of discovered it by myself, as I was an omnivorous reader and frequented the local public library a lot. One book in particular that I discovered stands out: Modern poetry, American and British, edited by Kimon Friar and John Malcolm Brinnin. I devoured this book and in particular was fascinated with the emphasis on experimentalism, as the anthology included passages from Finnegans Wake, and from Djuna Barnes’ Nightwood. I will say though that my Latin teacher, a crusty but kind Prussian named Ms Naomi Ramer, certainly presented for me the great Latin and Greek poetry in such a way that I became a classics “scholar” for the rest of my life. She encouraged me in my studies, to the extent that when I went to college, I finally decided on Classics as my major. No teacher had a greater influence on me than Ms Ramer.

When I first really got into writing poetry the dominating poets (for me) were Eliot, Pound and Cummings of an older generation, and Allen Ginsberg and the Beats of the generation just before mine. I have never really felt the presence of “dominating older poets”, and especially today when I myself am an older poet. When I think of “older” poets I consider Homer, Virgil and Dante as dominating my sphere.

I am a morning person, a very early morning person. I feel most creative after I have just gotten up, and most frequently write a poem before 7 AM. Sometimes a 2nd poem will occur to me later in the morning, rarely in the afternoon. The poems come to me and out of me pretty fast, and I do little or no revision.

The mystery, the enigma of life! What is birth, mind, ego, personality, and more specifically what is death? What are memory and time? Am I myself? and what if anything is the Universe, its origins? There is no adequate explanation for anything, and history and metaphysics do nothing to elucidate the enigma. By writing poetry, by endeavoring to write almost daily as I do, I address these questions and try to put a lyric bent on them. Sometimes a cue from another poet or poem will fire me up, as if riffing in a jazz sense from that particular inspiration. Finally it must be the Muse, that enormous archaic voluptuous and destructive woman, who frequently pushes me over the edge.

I do not understand this question, nor what work ethic has to do with writing poetry.

Poetry is written in solitary confinement.

Some in particular, namely Pound and Joyce continue to influence me for their sheer brilliance and inventiveness. I have re-read these two authors several times over in my life. Others like the Beats have taken a back row. Poets I discovered when I first started writing seriously, such as Vallejo, Lorca or Frank O’Hara continue to have a stylistic influence on my writing. I continue to read and re-read the great classical authors I mentioned above, as well as the troubadours whom I first discovered in high school. I draw on them as mythical sources and lyric inspiration.

This is a tough one to answer, since I don’t read a lot of contemporary poetry. A poet I have recently discovered, and were he alive would certainly be contemporary, is the Mexican Mario Santiago Papasquiaro, whose work is authentically wild, experimental and an amazing mix of Vallejo and Ginsberg. Born in 1953 he died tragically in 1998. Though not strictly speaking a poet, the beautiful literary works of the Italian Roberto Calasso are among my favorites. His erudition spans many levels of civilizations and cultures, and focuses principally on the relationship of myth to literature and consciousness. Two works of his stand out: The Marriage of Cadmus and Harmony, beautiful interpretations of Greek mythology, and Ka, similar investigations into Indian mythologies and religion. Both of these works are breath-taking in their bringing together the relationships between literature and consciousness. He writes in an arresting and often vigorously lyrical if not poetical style. Two poets, both close associates of mine and contemporaries for sure, John M. Bennett and Jack Foley, I consider as poets of often astonishing experimentalism. Foley, a kind of descendant of the Joyce of Finnegans Wake, exemplifies a stress in the oral tradition of poetry and his “choruses” are inimitable powerful and startlingly lyrical in their presentation. Bennett’s work is quite different, a visual poetry in the vein of so-called “concrete” poetry, his work can seem irritatingly inarticulate but at its best is beautiful and visually often quite stunning.

I think I pretty much answered this when you asked “What motivates you to write?”

It’s in my DNA, it’s what I have to do. At this point having lived a few days shy of 80 years, I don’t know how to do anything else.

10. What would you say to someone who asked you “How do you become a writer”?

You don’t become a writer. You either have it in you to write, by sheer intuition, or you don’t. You certainly cannot become a writer by taking writing workshops or getting an MFA. Becoming a member of the academy with a degree should not give you status as a writer, though nowadays it does. In the past great poets and writers rarely had any association with colleges and universities. They were out there on their own, as it were, experimenting eking out a living and usually supporting themselves by doing anything but writing. The only advice I could give is to read, and read a lot of poetry, understand that there is a tradition, and that there are many poetries mostly in the past and from many different places that have to be discovered and studied and enjoyed. Learn some languages other than your own and read and feel some of these poetries in the original. Then you will realize how inadequate translations can be.

Nothing in particular. I usually write daily 1 or 2 poems. For the past several months I have been writing “long” poems, or poem sequences, rather than single efforts. I have always had a preference for the epic (some of my best published work have been “epic” poems), and consider the series of “long” poems I have been writing as sort of mini-epics. My most recent published work is a sequence of 100 sonnets. Don’t know what else to say.