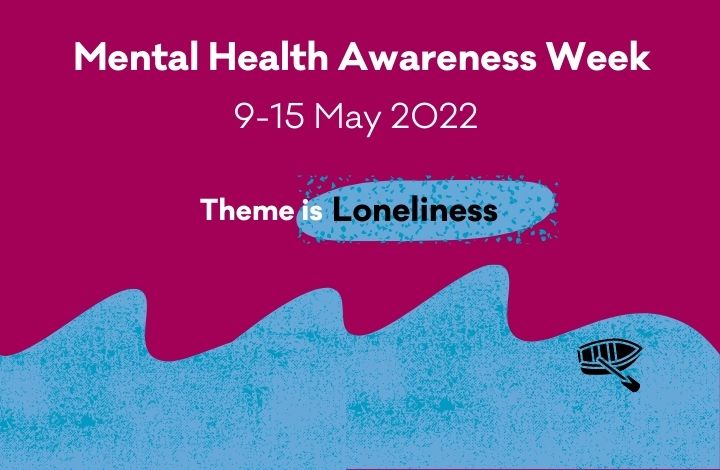 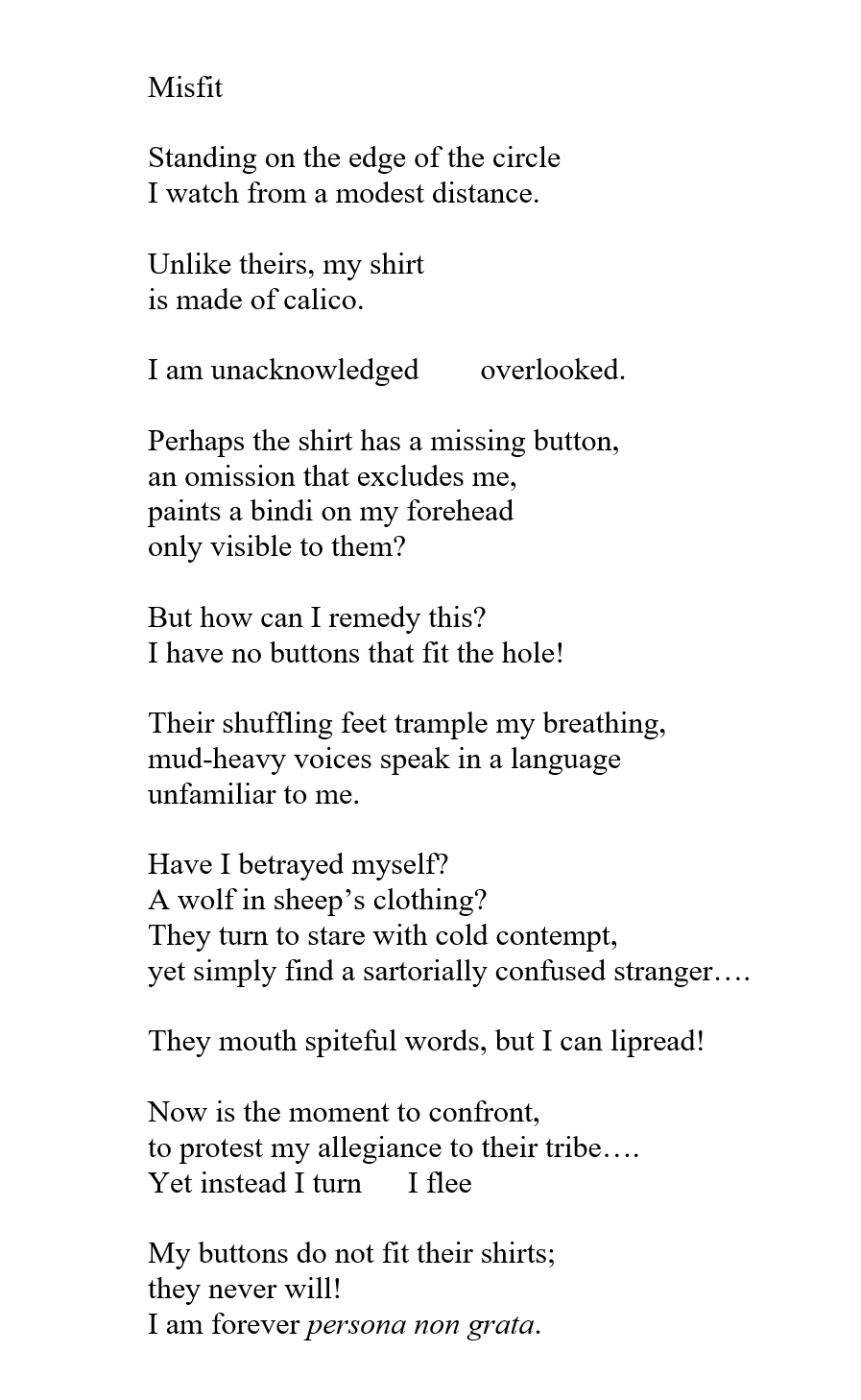 Loneliness has enveloped me, in its shroud,
A tsunami of sadness has drowned me,
The heavy weight of sorrow, crushed my dreams,
Life is an ever decreasing circle,
Devoid of emotions and hope,
The world still revolves around me,
I am static, I can’t move on,
My family try to reach me,
Their arms are not long enough,
My only solace is my alcohol,
Smothered in its embrace,
Cushioned by its intoxication,
Sleep is my refuge,
Dreams my escape, my only social interaction,
I carry on, step by step,
Day by interminable day,
Waiting for my next period of elation,
Mania, hyperactivity and then the next inevitable drowning.

Late mam stands in her white bra and panties
ironing a dress for her cheese and wine
hugs my eleven year old sobbing face, rallies,
consoles, I push away her being kind.

I can’t recall why I wept, only shock
of my mam undressed. Shy of forward
women I walk away rather than stop.
Younger I wet my bed, smelt, felt awkward.

What do I say to women? Argued I
couldn’t afford to wine and dine, talked
myself out of talking to strangers. Why
I spent so long on my own. My words walked.

Over the past 2 years Dana has taken a deep dive into the world of haiku. When her fingers are not occupied counting out syllables, she is using them to weed and plant her garden. You can also find her cooking, canning and preserving foods, birdwatching, taking photos, playing out on the trails or enjoying a book while her 3 dogs and 2 cats attempt to out-cute one another.

is state-educated, Manchester, now living in Wiltshire. MA Creative Writing, Goldsmiths, University of London. Elvis at the Golden Shovel appeared in February’s issue of The Honest Ulsterman, the first in a set of four sestinas using end words from Gwendolyn Brooks’ twenty-four word poem, The Pool Players, Seven at the Golden Shovel. Billy Collins longlisted another in the set of four for the 2021 Fish Prize. Poems have been placed at Icefloe Press and here in The Wombwell Rainbow. Two are due to appear in Stand Magazine later this year. A full collection reached stage two in The North’s March 2021 open call.

cleared enough space in her spare room and head to start writing ‘properly’ during lockdown 2020. She is published by One Hand Clapping, Fly on the Wall, Nymphs, Ekphrastic Review, Obsessed with Pipework, Indigo Dreams Publishing, The Poetry Shed and others. She is a winner of  Dreich’s chapbook competition 2021 with Hanging Fire. A qualified psychotherapist, she works with historic trauma and the physical and emotional distresses caused by chronic loneliness. Lives with an orange cat and a silver Yorkshireman. In her head, sky is always blue, grass always green, leaves always golden. Needs to get out more.

is a mature poet, currently studying Creative Writing with the Open University. She worked as a nurse for the NHS for 40 years. She lives in North Yorkshire.

was born in London and lives in Hampshire but has rarely felt less English; the blood of Celtic ancestors flows through her veins. Being the daughter of immigrants has entirely informed her world view and she has always instinctively empathised with the outsider and the ‘other’.

She writes delicate poems for fragile times because she has to. She wanders and wonders and dreams, and she is always lost in music.

debut collection, ‘Magnifying Glass’, was published in 2020. Her work has also appeared in a number of online magazines. She lives with her wife in North Wales. She loves the coast, peculiar things and the scent of ice-cream freezers. You can often find her on Twitter @soopoftheday.

has six books of poetry published. She has appeared widely in print, in webzines and  poetry anthologies. She has won or been short-listed in several competitions and her collection ‘Where Flora Sings’, published by Hedgehog Press, was nominated for the Laurel Prize in 2021. Her latest collection, ‘Immersed in Blue’ was published in January 2022 by Impspired Press. She leads a women’s poetry group in Nottinghamshire and takes part in open mic sessions online and in person. She is currently working on a third poetry collection.

-S Reeson [she/they] is 55, bisexual and married with two children: they have suffered anxiety for all of their life, and started telling stories as a ten-year-old in order to help them cope. Now, they write and record poetry, short stories and episodic fiction, whilst dissecting their unique creative process using both video and audio as the means to continue coping.

A considerable lived experience of mental health issues, a passion for niche arts and media and an undimmed enthusiasm for environmentalism combine, to allow creativity to emerge, and new stories and projects to be created. They love to experiment and push creative boundaries, and gain a huge amount of motivation and inspiration from talking about both the journey and continued evolution as a creative.

After winning a Poetry Society members’ contest (and reading that piece at the Poetry Café in Covent Garden) they attended the inaugural Mslexicon in 2019 and took part in their first ever Open Mic event. In that same year they wrote 24 poems about their home town for the Places of Poetry online initiative, one of which is included in the official anthology published for National Poetry Day in October 2020 by Bloomsbury and subsequently reproduced by the Sunday Telegraph.

Their work has been published by Flights / Quarterly ejournal, Green Ink Poetry, Fevers of the Mind, Acropolis Journal, Selcouth Station, Black Bough Poetry, Flapjack Press and Dreich, plus there have been performances at Gloucester Poetry Festival, Flight of the Dragonflies and the monthly event at Wordsworth Grasmere. They have read alongside countless poets, including Caroline Bird, Steve Camden, Deanna Roger, Jeremy Dixon, Julia Webb and Wendy Pratt, and in 2021 they read at the Essex Book Festival. They’ve also learnt and grown creatively via poetry courses run by Apples and Snakes, Kevin Higgins, Wendy Pratt and Jonathan Davidson. A self-produced poetry chapbook was produced in November 2020 (available to buy here).

In October 2021 they were nominated for the Best of the Net Award.

They enjoy living online, but also find great joy from lifting heavy weights, running and cycling in the meat-space. When not doing these, they are pursuing an ASD diagnosis on the NHS.

One thought on “#MentalHealthAwarenessWeek 9th-15th May. This year’s theme is “Loneliness”. Day Three. Please join Sue Finch, Dana Clark-Millar, Cy Forrest, Peter J. Donnelly, Sarah Reeson, Teresa Durran, Anjum Wasim Dar, Gillian Winn and I. I want to feature your published/unpublished poetry/short prose/artworks about loneliness. Please include a short third person bio. Here are seven types of loneliness as defined in an article in Psychology Today. If you have any unplublished/published poetry/short prose and/or artworks that relate to these I would love to feature them. New-situation loneliness. You’ve moved to a new city where you don’t know anyone, or you’ve started a new job, or you’ve started at a school full of unfamiliar faces. You’re lonely. B) I’m-different loneliness. You’re in a place that’s not unfamiliar, but you feel different from other people in an important way that makes you feel isolated. Maybe your faith is really important to you, and the people around you don’t share that — or vice versa. Maybe everyone loves doing outdoor activities, but you don’t — or vice versa. It feels hard to connect with others about the things you find important. Or maybe you’re just hit with the loneliness that hits all of us sometimes — the loneliness that’s part of the human condition. C) No-sweetheart loneliness. Even if you have lots of family and friends, you feel lonely because you don’t have the intimate attachment of a romantic partner. Or maybe you have a partner, but you don’t feel a deep connection to that person. D) No-animal loneliness. Many people have a deep need to connect with animals. If this describes you, you’re sustained by these relationships in a way that human relationships don’t replace. While I love my dog Barnaby, I don’t feel this myself — but many people feel like something important is missing if they don’t have a dog or cat (or less conveniently, a horse) in their lives. E) No-time-for-me loneliness. Sometimes you’re surrounded by people who seem friendly enough, but they don’t want to make the jump from friendly to friends. Maybe they’re too busy with their own lives, or they have lots of friends already, so while you’d like a deeper connection, they don’t seem interested. Or maybe your existing friends have entered a new phase that means they no longer have time for the things you all used to do — everyone has started working very long hours, or has started a family, so that your social scene has changed. F) Untrustworthy-friends loneliness. Sometimes, you get in a situation where you begin to doubt whether your friends are truly well-intentioned, kind, and helpful. You’re “friends” with people but don’t quite trust them. An important element of friendship is the ability to confide and trust, so if that’s missing, you may feel lonely, even if you have fun with your friends. G) Quiet-presence loneliness. Sometimes, you may feel lonely because you miss having someone else’s quiet presence. You may have an active social circle at work, or have plenty of friends and family, but you miss having someone to hang out with at home — whether that would mean living with a roommate, a family member, or a sweetheart. Just someone who’s fixing a cup of coffee in the next room, or reading on the sofa.”