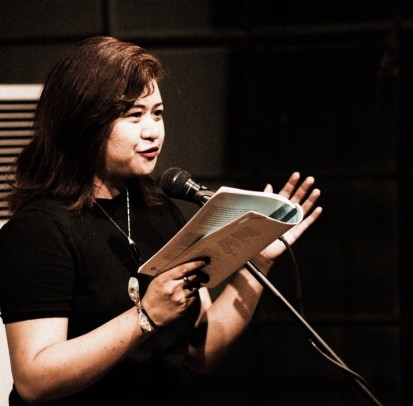 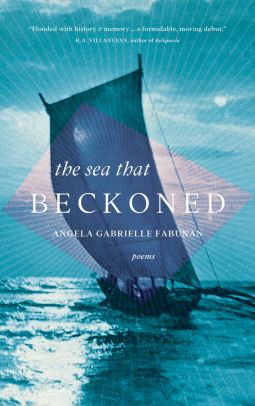 was raised in New York City and lives in Manila. She currently attends the University of the Philippines MA Creative Writing program and teaches at the Technological Institute of the Philippines. In 2016, she was awarded the Carlos Palanca Memorial Foundation Awards for Poetry. Her work has appeared in or is forthcoming from The Indianapolis Review, Cordite Review, Asymptote Journal, Harana Poetry, New Asian Writing, and River River Journal, among others. She is one of the current poetry editors at Inklette Magazine. Her first book of poetry, The Sea That Beckoned, is available from Platypus Press.

When I was younger, I had a 3rd grade teacher named Mrs. Lippman, who has now passed on. She was amazing because I learned so much from her and the classroom library that she gave me access to. There, I started reading children’s books like the poems of Emily Dickinson, Anne of Green Gables, Pollyanna, The Giver, Number the Stars, and others.

I can really say that it was Mrs. Lippman and Emily that got me into poetry. It was my first year in America as an immigrant from the Philippines. My window in my room then had a full view of the moon, and I remember nights staying up late to look at the moon and read Emily Dickinson’s many tidings about it. It was an idealistic and romantic time, looking back now.

It was my introduction to the world of literature. Early on, I was reading the classics for kids, and later moved to young adult fiction. I think we have much to thank the early educators as well as the children’s and young adult book writers for instilling passion for the written word to kids as young as I was then.

2. How aware were you of the dominating presence of older poets?

At first, poetry was really intimate to me. It was just between me and the page. Looking back at all the journals that I kept growing up, I realize knew I wanted to be a writer even early on. And yet, I wasn’t aware of what it would be like to belong to a community of writers. Of course, the presence of that community loomed large where I grew up, in New York, but I always thought they just wore lots of black and drank lots of coffee and that’s it. There’s so much more to poetry than its appearance to the public.

I moved back to the Philippines in my young adult life and that’s when my flirtation with poetry started to get serious. I was in my first year of graduate studies not knowing what I was to do. I took a fiction class first and most of my fiction came out like really long poems, looking back now.

It was only when I took my first two poetry classes at the University of the Philippines and the following semesters after that that I thought: ok, this is what I’m meant to do. In those classes, I read English poets like Philip Larkin and Seamus Heaney alongside Philippine poets like Angela Manalang Gloria and Virginia Moreno. I started writing poems that I would scan for meter and rhyme, which is probably why I still write from time-to-time in traditional forms. I poured my heart out that semester and some of those poems found their way to “The Sea That Beckoned,” published by Platypus Press. I really fell in love then and to this day, I remember that feeling—it is what propels me forward.

I veered away from the question, but I think that I always thought that the older poets, with their mature experience of the craft inspired me rather than instilling fear in me. We are all part of a community of poets and I like to think we all belong and have our place in it. I’ve heard the term “serious poetry” often, which makes me wonder if it’s really serious poetry we are looking for or the more serious dedication that makes or breaks a poet that we want to see. All in all, I’m happy to belong to a community of writers here in the Philippines that, although it has its flaws, for the most part encourages rather than detracts the writing of poetry.

My daily writing routine consists of me putting on my black outfit, drinking my first cup of black coffee and writing in my black notebook—just kidding.

This is what’s true: I usually read and write poetry at night now. Perhaps it is from the early childhood years of looking at the moon and reading poetry. I used to write in the daytime in cafés but it got too expensive. And a bit too stereotypical for my comfort. I got so used to the mantra “fake it until you make it” that I think to myself sometimes that I’m still trying to fake being a poet. Does one ever become a poet, or do you know just you are at some point? I’ll leave that open-ended for now.

There is one thing about my daily routine that stays constant: I read a poem or a collection of poems by other writers before I write one of my own. It is a type of tradition that my early college years instilled in me: read, read, and read. A new page always seems fresh to me, even if I have read it countless of times before. There is always something new to learn from a poem. And many things to learn from other writers. Learning from these two sources—the poem and the author—has always and will always motivate me to write and contribute to the works of those who have come before me.

Tradition is important to me. Nothing in poetry is new. It is a long tradition like a tree with many, many branches. But only in plumbing the depths of the works that have been written before can you find your own slant of light. We have to find what we can contribute to the exchange of ideas between all these different types of poets. What are we adding to the conversation? Who are we replying to? Who are we speaking to? How can we say what we want to say? Ideas motivate me to write, not just to be heard, but to be part of some kind of conversation.

I have been told by mentors that I write volumes. That’s just how my process is. I am fully aware that they’re rarely good poems when they’re first put down, but I write many in one go just to get that shitty first draft, as Anne Lamott calls it, over with. I go through so many new first drafts and many more revisions. I have a lot of respect for those who hold on to a draft for a long time, like Elizabeth Bishop. Alas, I’m more of a Robert Lowell when it comes to my writing process, I think.

6. Who of today’s writers do you admire the most and why?

Of course, I’d first say my previous mentors and influences, popular Philippine poets Isabela Banzon, Jose Neil Garcia, Paolo Manalo, and Conchitina Cruz. I love each of their work because they are my Philippine romantics. I’ve learned much from them as human beings and as poets. I won’t gush here.

Next, I’d have to say I have so much admiration for poets who have made social media their home. I don’t know the first thing about the language of the internet, but I know it is in the air of the future. They’re the ones that will be in our history books, soon.

7. Why do you write, as opposed to doing anything else?

I write because I want to converse. There are people I want to talk to, dead or alive, here or distant, found in the now or lost in a time and space. I want to be able to say to them what I would have said if the time was right. I am a Romantic, I think, with a big R, and I write to people whom I have loved in many different ways. The art of letter writing is dying, but I think the people who want to read poetry around the world read it as some kind of letter to the world. My poems are certainly my own “Letter to the World,” if I may invoke Dickinson again.

8. What would you say to someone who asked you “How do you become a writer?”

I think I can’t say this enough, but it really helps if you pick up a book and a notebook. Reading is writing and writing is reading. That’s really it. See if it’s for you and if you’re happy doing it, having that book in your hands, whatever it is, and wanting to respond to it. And if you’re happy doing that, do it again the next day. And the next and so on and so forth. One day, you’ll look at yourself in the mirror and think to yourself, “Am I a writer now?” And the answer from across the pond will confirm with a resounding “Yes!”

I have a poem, which is I think perhaps one of my better poems, called “Catastrophes of Home,” which will be out in The Indianapolis Review this April 2020. I’m really excited for the public to see that.

I have been writing a second manuscript after the release of The Sea That Beckoned that might see the light of day in the next few years or so, in line with the researching and writing about a theory of Philippine Romanticism that I’m espousing, about how romanticism is unique to my country. This should keep me writing for the coming years, as well as the deep longing which is an ever-present shadow behind me.

Many thanks to Paul Brookes for this interview.