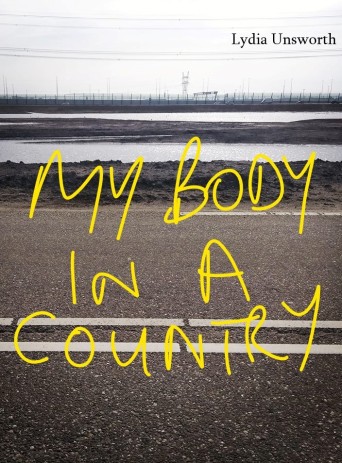 is the author of two collections of poetry: Certain Manoeuvres (Knives Forks & Spoons, 2018) and Nostalgia for Bodies (Winner, 2018 Erbacce Poetry Prize). She has two pamphlets forthcoming in 2019 from above / ground press and Ghost City Press. Recent work can be found in Ambit, Litro, Tears in the Fence, Banshee, Ink Sweat and Tears, and others. Manchester / Amsterdam. Twitter@lydiowanie

I think I was always trying to. I would spend time anagramming, writing ‘lyrics’ to songs, reading, copying down sentences I liked, playing any kind of board game with words in it, watching improv comedy. Since I was a young adult, I was always more interested in the book at sentence level than the narrative as a whole. I liked novels full of tangents, and I was (still am) a big fan of underlining parts. I suppose I just didn’t know what poetry was properly, beyond the very traditional, or what it could be until much later. I think I was writing poetry on my art degree, although even at such a late stage, I still didn’t really know it was poetry. I knew I liked poetic language, poetic prose, form as concept, but actual Poetry, I think I still thought of that as quite an old, dead thing. I wasn’t around other writers in my real life, and the writers I was reading (prose writers or visual artists), when they did reference poetry, likely only confirmed that ‘old, dead’ belief. When I was 14 or so I found The Desiderata as the epigram in a series of Dean Koontz novels: I liked that. I printed it out and put it on my wall. Learnt the word ‘perennial’ from that piece.

I drifted towards it via visual art. Though I was writing throughout my art degree in sorts, but it was probably another ten years before I realised that the writing was the crux of the matter and before I found a path in to actually reading poetry proper. My prose reading habits were getting poemier and poemier. Years passed. Then I moved to Poland and wrote to someone whose blog I found funny (Socrates Adams) and he sent me his novel-in-progress in increments. It was the first time I’d had dialogue with another writer and I started writing again there, in my chilly attic bedroom, properly, long after the visual distractions had fallen away. I was writing poetic-prose or experimental prose or something: I had a few pieces published and a novel shortlisted, then it fell away again, and again. It was always there, but I was always waiting until later, trying to accumulate knowledge (not realising how much of that knowledge was ephemeral and slips away completely unless you do something with it in the moment – which is one thing I love about writing poetry now, just slapping the fleeting, contorted-to-fit, down on a page). Anyway, after some more years passed, and I was writing on and off (by now some actual poems, although I still wasn’t reading any), I was given a sum of money that allowed me to do a Masters degree in Creative Writing, and I knew I was at risk of losing much more time unless someone ‘in the know’ actually verified me, so I did it, and they (Scott Thurston) did, and what I wrote at the end of that year became my first published collection of prose poetry. It was a ten-year voyage from the land of art to poetry on a small lump of driftwood with an intermittent internet connection and a changeable breeze.

2.1. What do you mean by “My prose reading habits were getting poemier and poemier”?

I was reading for the language, not the plot.

2.2. Why did the language become more important?

I think it always was, it just takes a while for a chain of reading to lead you to certain places. I was always looking for sentences I liked. And I guess the more I read, the more I grew tired of some of the rest: the same shapes of novels, certain cliches, techniques, wrapping-up of narratives, representations of women, predictable metaphors. It takes more to be surprised, I suppose. Or a different way of viewing something to find what is, or can be, surprising about it.

3. How aware are and were you of the dominating presence of older writers traditional and contemporary?

I think I’m more aware of the what-seems-like-class of a lot of writers than the age. I don’t mind people being older per se, they might have worked for it.

As much as possible in any possible sliver of a gap! I often pinch lines overheard from my environment as a starting clay, or some image from something I’m reading, whether that be a book or simply a strangely worded sign, so I try and store all these fragments until I have a fifteen-minute or more gap, and then I write. I do my longer bouts of refining and building and editing in the evenings at least a few times a week, preferably when everyone else is asleep.

A desire to communicate everything that is interior and, by the very nature of its interiority, alone. It’s a reaching toward. And it’s the same thing that motivates my reading: knowing the strangenesses and possibilities of ‘the other’. That, and the ability to sculpt a piece of language-music from the environment you find yourself in, whether that be internally /externally /in real time /via memory.

They altered my outlook on life and have given me the foundations for my ongoing philosophy. It’s unshakable really. I think of Kafka and Beckett in particular, and I do still look for that melodrama and highfalutin despair everywhere in art, and when I find it, that very specific kind of comedy, then I do feel so terribly comforted. I’m reading The Milkman by Anna Burns in between questions here, and she’s also doing it in a way – it’s very funny, but serious-funny, bleak-funny. Like Catch 22 or Stewart Lee, just make the joke (or, following the same rule, take the emotion) and keep making it. I like that. The joy of repetition.

And I guess the writers you read at a certain age sort of raise you. So it’s good to stay fond of them. Helps you understand yourself.

Anyone writing in a void, without a support system, or in scraps of stolen time, who manages to tread water long enough to burst through the surface. Anyone who doesn’t give up.

8. What would you say to someone who asked you “How do you become a writer?”

Write. Write without thinking. Write until your body hurts. Change position. Do it again. Keep writing until you end up some place that surprises you. Edit.

I’m working on a full collection, which seems to be spilling over into two collections. I have a pamphlet I’m trying to make ready, based on a bunch of poems I wrote as part of the Tupelo Press 30/30 project back in June. And I am nearly finished preparing another pamphlet (‘I Have Not Led a Serious Life’) that will be coming out with above / ground press later in the year. I’m mainly trying to keep momentum up around work and child-raising and physical exercise; it’s easy enough to write a poem, but harder to see which ones belong where without spreading out a hundred pieces of paper on the floor of a large empty room. I am grateful for my writing friends and our ad-hoc collaborative editing relays.

Thank you for these questions, Paul. It’s been a pleasure!