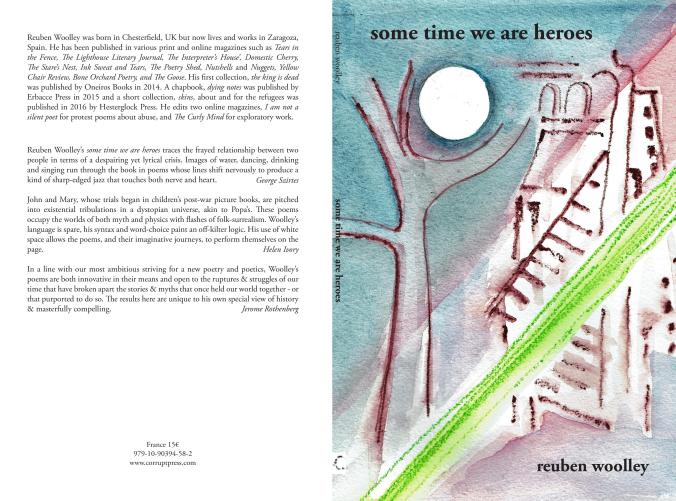 Reuben Woolley has been published in Tears in the Fence, The Lighthouse Literary Journal, The Interpreter’s House – The Yellow Chair Review, The Goose, and Ink Sweat and Tears among others. Published Books: the king is dead, 2014, Oneiros Books; dying notes, 2015, Erbacce Press; a short collection on the refugee crisis, skins, 2016, Hesterglock Press; broken stories, 2017, 20/20 Vision Media Publishing (email: rhysjones@twentytwentyvisionmedia.com). His new book, some time we are heroes, is published this month by The Corrupt Press: http://www.corruptpress.com.  Runner-up: Overton Poetry Pamphlet competition and the Erbacce Prize, both in 2015. Editor of the online poetry magazines, I am not a silent poet: https://iamnotasilentpoet.wordpress.com/  and The Curly Mind: https://thecurlymindblog.wordpress.com/.
He may be found on Facebook at: https://www.facebook.com/reuben.woolley1, and on Twitter at @ReubenWoolley. He blogs at: https://reubenwoolley.wordpress.com/

I first started writing poetry in 1968 when I was in the Fifth year or Lower Sixth at school. I was very much influenced by an anthology of 20th Century poetry we had read for ‘O’-levels. I found poems about recent events in a language I could understand and relate to, such as Louis MacNiece’s ‘Prayer before Birth, Spender’s ‘Port Bou and Yeats’ ‘Easter 1916’. At the same time I found the Liverpool Poets with Adrian Henri singing the praises of Sixth Form schoolgirls! In the Sixth Form we had a brilliant teacher who took us through Baudelaire’s ‘Les Fleurs du Mal’ and he suggested reading T.S. Eliot. From here I went on to Jacques Prévert and Yevgeny Yevtushenko, Rimbaud and others in the various Penguin series. I took up residence in the school and Coventry libraries and discovered Dylan Thomas. I deluded myself into thinking that I could do this too.

Someone at school showed the art teacher my work and he became a confidante. He took me to the Herbert Museum and Art Gallery in Coventry and introduced me to the Director, a Northern Irish poet called John Hewitt. Although he was soon to retire he took great interest in my work and became my mentor.

I continued writing when I went to Bretton Hall College of Education (University of Leeds) and also when I came to Spain in 1976. Indeed, by 1985, I was developing a similar voice to now and some of my last poems went on to form part of my first collection (‘the king is dead’, published by Oneiros Books in 2014). I stopped writing in 1985 and did nothing till 2012 when I was encouraged by a student of mine as well as by someone I met on Facebook. They demanded I should write again.

2.  What motivates your writing?

The simple answer here is ‘I wish I knew so I could do it more often’!

It could be a word, an image, even a line or a couplet that occurs to me and seems to lead somewhere. Where that somewhere is might become clearer as the poem develops or it might not appear till the poem tells me it’s finished and ready for editing, cutting or carving up. Even my better protest poems don’t start off as a protest very often; towards the end of the process I might realise ‘ah this is about the Syrian refugees’, for example. It’s when I sit down with the idea of writing about something in particular that the result is usually rubbish.

In general terms, I may be motivated by other poets, by a painting, music or I might pick up something from Scandinavian, Saxon, Celtic, Greek, Judeo-Christian, Arabic mythology and that might just appear as a metaphor or brief reference in the whatever-it-is-I-am-writing-thing. It’s all in my head anyhow and I’m just another crazy!

You should include Catherine Ayres in that category; I would love to have had her as a teacher! I like to think I was a good teacher, but  my subject was English Language, the nuts and bolts of the language. I failed my English Literature ‘A’-level, but later went on to do an MSc in Teaching English as a Foreign Language,and also what would be the Spanish equivalent to an MA in Applied Linguistics.. I sometimes used a song or a poem in class, and even used Geoffrey Chaucer when I occasionally talked in class about the history of English, but I don’t think I really got many of my students interested in literature.

I did get some of them to read Harry Potter and even Terry Pratchett occasionally, but I think the interest was already there.

I’m not sure I have a work ethic as such. I think I’m reasonable ethical but work?
I suppose poetry can be considered to be work but it¡’s certainly not the get-rich-quick type of work. Those of us who do it normally seem to get on well together and help each other. I’ll sign on the dotted line for that. I try to help others, especially with my online magazines, ‘I am not a silent poet’ and ‘The Curly Mind’. I’m happy if I can help someone on the way to wherever it is they want to go in the poetry world.

How do the writers you read when you were young influence you today?

Eliot is still very important to me. His use of images and the feeling that it is not necessary to understand a poem 100%. James Joyce and Beckett for similar reasons. I still like Adrian Henri but not so much the other Liverpool poets. I don’t agree with this recent requirement for poetry to be ‘accessible’. As Geoffrey Hill said, public toilets should be accessible, not poetry. However, sometimes I get the feeling that some poetry is deliberately complicated just to impress.

4.  Who of today’s writers do you admire the most and why?

Fran Lock for her wild control of the flow. I think she stands out and is outstanding.
Antony Owen for writing political poems very poetically. Protest does not need to be expressed in easy terms. It must still be a good poem.
Jerome Rothenberg for the tremendous feeling he expresses and for all his work in international poetics.
Helen Ivory for being Helen Ivory and doing it so well.

a.) Because I can’t play guitar like Eric Clapton or Jimi Hendrix or saxophone like John Coltrane
b.) Because it’s what I can do and I seem to be able to do it reasonably well.
c.) Having started writing again, there’s no way I can stop now.

6. What would you say to someone who asked you “How do you become a writer?”

Become a professional snooker player instead! You might make some money.
But seriously, if they need to ask a question like that, they should be looking at other futures. I’d accept a question like that from a schoolchild but not from an adult. Now if a young writer asked me about which journals or publishers might take their work, I would be delighted to give my opinions. That is useful knowledge that we have all asked for and been grateful to receive.

Two things should be pointed out to young writers: firstly, they are going to get vast numbers of rejections so learn from them, and, secondly, they should learn to edit and cut and rewrite, then start all over again.

7. Tell me about the writing projects you have on at the moment.

This September I have a new collection coming out with The Corrupt Press, ‘some time we are heroes’. It’s based on the very English, very middle-class and very white protagonists of the old Ladybird Easy Readers. However, they are no longer so English, so middle-class or so white and we follow them through episodes of the (mis)adventures in this dystopian reality of ours.

I have another manuscript which I’m pushing out in search of a publisher, written through the eyes of a young woman who lives on a parallel world in this multiverse of string theory. For some reason she can see and partially understand and even participate in events on this world.

I said earlier that my work is very influenced by music, the Bob Dylan of ‘Bringing it all Back Home’, ‘Highway 61 Revisited’ and ‘Blonde on Blonde’, especially, Roy Harper and Captain Beefheart. These have all influenced me rhymically and verbally. Miles Davis, John Coltrane, who led me into Free Jazz. I’m trying to get a Free Poetry of a similar nature. This does not mean anarchy; no good verse is free. The good poet, just like the good free jazz saxophonist, controls every element at his or her disposal: just this, just here, just now!